The story of the “Hall of Records” begins with Atlantis. Near the end of the days of the Atlanteans, the readings explain: “… there came the first egress of peoples to the Pyrenees and into what later became the Egyptian dynasties.” Images from these areas seem to represent the disaster:

“The first of the eruptions that awoke from the depth of the slow cooling earth, and that portion now near what would be termed the Sargasso Sea first went into the depths. With this there again came that egress of peoples that aided, or attempted to assume control, yet carrying with them all those forms of Amilius that he gained through that as for signs, for seasons, for days, for years. Hence we find in those various portions of the world even in the present day, some form of that as was presented by those peoples in that great development in this, the eden of the world [this reading is referring to astronomy and thereby associated with the development of the calendar]…that as for signs, for seasons, for days, for years.” (Edgar Cayce Readings 364-4)


What these people carried were records of the movement of stars and constellations. (Edgar Cayce Readings 364-4)

The readings tell us where they settled:

“In those periods when the first change had come in the position of the land, there had been an egress of peoples from the Atlantean land and they built a city near the edge of the Sahara.” (Edgar Cayce Readings 5748-6)

We also learn about the first pyramids built in Egypt. We discovered the reading of Miss [993] (in the Cayce readings, individual’s names are represented by numbers to protect their privacy), who had a past lifetime in Egypt during the period of the Great Pyramid’s construction and Ra-Ta was the priest (circa 10,500 BC, according to Cayce). The readings go on to describe two lifetimes before that one in the land of Og and another one in Egypt earlier when the first pyramid was built there. This proves that there were pyramids in Egypt before the Great Pyramid was built!

The readings tell us that this same country had been submerged for nearly a quarter of a million years since civilization had been in this portion of the country. (341-9)

When Ra-Ta and his people arrived in Egypt, they conducted archaeological research. (5748-6) They began to build upon those mounds that were discovered through research. With the storehouse or record house (where the records are still to be uncovered) there is a chamber or passage from the right forepaw to this entrance of the record chamber or record tomb. (5748-6)

The readings explain that “the monuments were unearthed and added to from time to time…many were buried beneath shifting sands.” (341-9)

We began to suspect that the first pyramids may have been flat on top and that they may have been added to at a later date. One pyramid in particular, Khafra, appeared to have been constructed of two sections with two distinct construction styles, still visible today. This discontinuity could indicate an interval between the construction of the lower segment and the completion of the upper segment. (Complete Pyramids, Mark Lehner)

Another of the key monuments is the Sphinx. When describing it, Cayce sometimes called it the “Mystery,” as if that was what it was called in ancient Egypt. We began our research by searching ancient Egyptian texts for that word, and we found it. There were many places in the Theban Recension of the Book of the Dead (three volumes written in hieroglyphs) which included the word “mystery”. That was the genesis of our research. After many years of study and comparison of texts and star charts, we eventually discovered there was an astronomical correlation to the Sphinx. From the Edgar Cayce readings we learned that the Sphinx monument was later set as a guard. We discovered a star constellation known in ancient Egypt as a Sphinx. This meant that the Edgar Cayce readings may have been referencing both the Sphnix monument and the Sphinx star constellation. (378-16)

This in position lies, as the sun rises from the waters, the line of the shadow (or light) falls between the paws of the Sphinx, that was later set as the sentinel or guard, [This is referencing the Sphinx Monument on the ground.]

And which [the sealed room] may not be entered from the connecting chambers from the Sphinx's paw (right paw) until the TIME has been fulfilled when the changes must be active in this sphere of man's experience. [This is referencing the Sphinx Constellation that was in a certain position in the sky on a certain date at a certain time.]

The ancient Egyptians imagined one constellation as a Sphinx. Today, we call it Centaurus since the Greeks later imagined that it was a Centaur.

There is a zodiac in the temple of Esne in Latopolis that shows this illustration of a Sphinx in place of the constellation Centaurus. This suggests that there was a Sphinx constellation before the Sphinx monument was created. 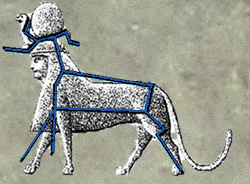 Both civilizations imagined that the constellation represented a being with the head of a man and the body of a quadruped. The constellation perfectly fits within the illustration of the Sphinx from zodiac at Esne.

From The Book of Aker (Ramses VI)

Next, we wanted to understand about the “guards” mentioned in the readings. The readings say: “Those who were left as guards may not be passed until after a period of their regeneration in the mount.” (5748-6)

The two Sphinx gods at opposite sides of the horizon are the constellations of Centaurus on the left (East) and Leo on the right (West). The flying serpent in the center of the horizon is Hydra, the largest constellation in the sky. The head at the tail of the serpent represents the planet Venus.

The readings explain that Giza was formed according to that which had been worked out by Ra-Ta in the mount as related to the position of the various stars … [and] the constellation Libra. (294-151)

This is the exact configuration of stars, planets, and constellations over Cairo, Egypt. In order for it to fit, you have to go back to the time of Ra-Ta, 10,390 BC. At the tail of the flying serpent is the planet Venus positioned within the constellation Libra. 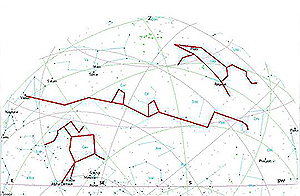 Edgar Cayce provided many clues to the location of the Hall of Records:

“The one in the Atlantean land, that sank, which will rise and is rising again; another in the place of the records that leadeth from the Sphinx to the hall of records, in the Egyptian land; and another in the Aryan or Yucatan land, where the temple there is overshadowing same.” (2012-1)


“For the entity's tomb then was a part of the Hall of Records, which has not yet been uncovered. It lies between—or along that entrance from the Sphinx to the temple—or the pyramid; in a pyramid, of course, of its own.” (2329-3)


“Hence we find the entity…was the first to set the records that are yet to be discovered…and for the preservation of the data, that as yet to be found from the chambers of the way between the sphinx and the pyramid of records.” (1486-1)

Cayce tells us that the second pharaoh, Araaraart “will be found…in the North Corner of the second Pyramid…” (341-1)

In a subsequent reading, he said the same entity, Araaraart, will be found “in the upper chamber of the northeast corner of the first pyramid builded.” (341-8).

In another reading, he said, “In the first of the pyramids built in the Valley of the Shadow, there still may be found unto this day portions of data as was preserved with the ruler, who afterward was worshiped as the representative of God made manifest in earth. These will be found in the northwest corner or chamber of this mound.” (5748-4)

It is our conclusion that the first and second pyramid refer to the same pyramid and that it is the pyramid of Khafra. Today it is known as the second pyramid, but we believe that in reality it was the first. We base this belief upon evidence from Edgar Cayce’s reading (993-1,#23) which explains that the first of the pyramids was constructed in Egypt long before the lifetime of Ra Ta and long before the construction of the Great Pyramid. This pyramid was underwater for nearly a quarter of a million years before Ra-Ta entered Egypt (341-9,#4).

We look forward to the time when the Hall of Records may be opened:

“Yet, as time draws nigh when changes are to come about, there may be the opening of the three places where the records are one, to those that are initiates in the knowledge of the One God.


“The temple of Iltar will then rise again. Also there will be the opening of the hall of records in Egypt. 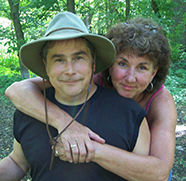 John Bunker is a successful business owner who has been a student of Edgar Cayce since 1994. Their latest book written with his partner, Karen Pressler, The Book of Aker is a complete new translation with almost 400 illustrations, 170 in color. This is the first exhaustive translation of the complete Book of Aker from the tomb of Ramesses VI. Their ongoing research is on their Web site: Sites.google.com/site/edgarcayceandthehallofrecords.