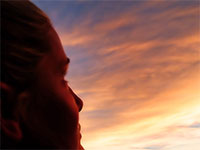 On a cool December morning, two days before Christmas 1998, Daniel joined our family. Motherhood was my happy place. My daughter was turning three years old in a few days, and I was ready for this baby boy. When I gave birth the first time, I finally knew what people were talking about when they used the word bliss. I’d never felt such complete satisfaction in a job or relationship before. This was round two.

That same afternoon our pediatrician stopped in to meet him. From the other side of the room she took measurements, something that had already been done in the delivery room, and spoke to my husband. I heard a word and knew immediately what it meant. It was a life-changing word.

“There’s some relative microcephaly here,” Dr. Barbara was saying. I’m a Registered Nurse, and Daniel’s father is an MD whose specialty is brain injury. He knew the meaning of the word, too. We were both stunned. This second shot at parenting would be very different from the first.

A diagnosis of microcephaly means that the brain is small. Daniel’s head circumference was on the growth charts, but just barely. His height and weight were well within the tenth percentile, so in comparison to the rest of him, his head was microcephalic. Most of the time microcephaly is equated with mental retardation and a shortened lifespan. It’s generally a symptom of a larger issue, and many genetic disorders have micro as a feature.

During our hospital stay I tried very hard to erase that diagnosis. I questioned other doctors on staff. One early morning, mid-way through the night shift, I was awake in the special care nursery where Daniel was moved because of low blood sugars and jaundice. I quizzed the neonatologist about the measurements. I told him our pediatrician’s opinion that my newborn was microcephalic, and asked him what his thoughts were. He said that, no, a head circumference of 12.5 inches was well within normal range. This doctor had a big title; he had to know what he was talking about. Ha! Dr. Barbara was wrong!

When I reported this to her the next day, she wasn’t bothered that I challenged her suspicions. That’s not her style. She’s a smart doctor with sharp instincts. She stood by her observation that Daniel was microcephalic, and said we’d talk about it more when we went home. Still, I scratched out the word microcephaly on his discharge papers before signing them. I’m nothing if not a stubborn mama.

A month later we met for consultations with a genetics specialist and a neurologist. It was official. I couldn’t scribble away the microcephaly word any longer.

The early days were rough. Physically, I was raw from lack of sleep and emotionally I panicked. I imagined the worst and didn’t know if I was up to the task. No one could give us a prognosis since his only diagnosis was microcephaly. He didn’t gain weight no matter what we tried, and he cried all the time.

What did this mean, and would I be up to the challenge? I imagined him staying exactly this way forever, with me holding and rocking a wailing 45 year old baby. I unraveled. 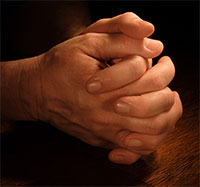 I needed to learn new skills this time around. I didn’t want to. I wasn’t happy about it. I also knew I had no choice. This was not a repeat of my first experience with being a mother. I couldn’t do this if I didn’t gain some spiritual and emotional footing. I remembered the months leading up to Daniel’s birth. It was important to find peace in my soul, and remember that he was exactly where he needed to be, with the body and brain intended for him.

Before Daniel was conceived, I was working on a proposal for a book on conscious conception, the idea that we can invite a soul into our lives with intention and prayer. My first book, Walking the Spiritual Walk, had a chapter entitled “Awaiting the Gift” that touched on that concept.

In my research on the way other cultures prepare for pregnancy, I read a book called The Conception Mandala: Creative Techniques for Inviting a Child into Your Life by Mark Olsen and Samuel Avital. Mandala is a Sanskrit word meaning sacred circle, and they’re sometimes used in Buddhist meditation. 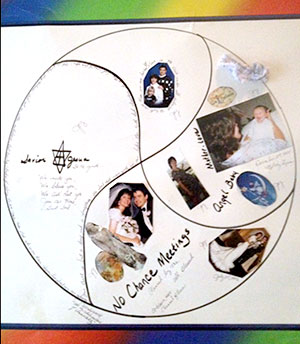 In late 1997, I tried my hand at a conception mandala. I drew a giant circle on a poster board with a rainbow border. The circle had four sections within it, each with pictures, poems and prayers inside. In one of the sections, I wrote the words “Angel Baby” and glued a picture of a child-angel sitting on a sliver of a moon staring at the stars (a few years later, Debra Snyder, author of Intuitive Parenting and president of The Heartglow Center, invited me to join an online support group for mothers of children with similar disabilities called AngelBabyMoms). It was a little out there, maybe, but prayerful, and something I took seriously.

I pasted a little piece of my daughter Melody’s pink and blue newborn hospital cap onto the page. I wrote lines from favorite poems, including Wordsworth’s “Intimations of Immortality”:

Our birth is but a sleep and a forgetting;
The Soul that rises with us, our life’s Star
Hath had elsewhere its setting
And cometh from afar
Not in entire forgetfulness,
And not in utter nakedness,
But trailing clouds of glory do we come
From God, who is our home:
Heaven lies about us in our infancy

Thinking about the mandala, and the idea that we’d prepared for him and invited him into our lives gave me hope. I still had my doubts, though.

It’s in my nature to doubt, but also to believe. I’m willing to explore and be a little far out, but I am skeptical and down-to-earth as well. These polarities are part of who I am, and they don’t diminish the faith I have in the soul journey we’re on. Daniel chose us as parents. His soul knew what it was doing. He is here to teach and learn the art of loving. We each are.

It’s been a long time since I first heard the word microcephaly. My marriage ended for reasons unrelated to Daniel’s challenges. He is loved dearly by both of us, but it has been up to me to maintain his care. There’ve been lots of specialists, many hours of school and therapy, medications for the seizures that started at one year of age (also eased by following the Edgar Cayce seizure protocol), but no definitive diagnosis. Yet, it wouldn’t define who he is or what he’s about, anyway.

Daniel is gentle. His disabilities are severe and he requires full-care in every way. But his spirit is intact. The look in his eyes and the impishness in his smile are exquisite. I can see and appreciate his life. Daniel’s path is his own. I don’t know exactly why he chose to come into the world in a body that would always be dependent on others for care. I do know that he radiates joy.

The mandala I made in 1997 is still in my bedroom. The words from that invitation are fading, but clear. I pull it out from time to time to remind myself that our lives do have purpose. Microcephaly would not be the final word.

On the left side of the mandala, there is a Star of David enclosing a cross. The words, Savior Jesua, are on either side of the star, with the prayer “Be the Guide” underneath. Below is a simple request: We invite you, we bless you, and we ask that you join our home, Great Soul.

I asked and he answered. When I wrote and prayed for divine love and joy to be the central purpose of my life, I meant it. When Daniel got the invitation, he responded with acceptance. It’s that simple. It’s that profound.

Carolyn Kresse Murray discovered Edgar Cayce during childhood, and became a lifelong student of the readings. She is a registered nurse who works for the public school system. She is the author of Walking the Spiritual Walk, and her work has appeared in Nursing Magazine, the American Journal of Nursing, and Millikin Quarterly. Carolyn lives with her two teenagers and husband Rich in Jacksonville, Florida. You can read her other blogs at MyDanielsGift.blogspot.com.

The Power of Sound Meditation

AUGUST - The Lives of Leila: One Soul’s Journey through Incarnations