An Astrological View of World Affairs
By Raye Mathis 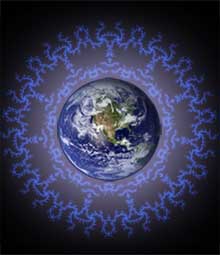 During this period of financial crises and natural disasters around the world, it is sometimes difficult to find the meaning in all that is happening. Richard Tarnas, in Cosmos and Psyche, suggests that we have forgotten the interconnectivity of all things in the universe – the Oneness of all that the Cayce readings so often mentioned. Tarnas suggests that we need a new worldview.


Before the dawn of the scientific era humans perceived the cosmos in a very different way.

“The primal human being perceives the surrounding natural world as permeated with meaning, meaning whose significance is at once human and cosmic. Spirits are seen in the forest, presences are felt in the wind and the ocean, the river, the mountains. Meaning is recognized in the flight of two eagles across the horizon, in the conjunction of two planets in the heavens, in the unfolding cycles of the Moon and Sun. The primal world is ensouled.”
Richard Tarnas, PhD, Cosmos and Psyche

As the scientific era took hold, humans began to view themselves apart from the universe, rather than a part of the universe. This view of the world, although it has brought many technological advances, has also cast a very dark shadow in our treatment of nature and mother earth.


The Cayce readings remind us of how connected we are with our solar system:

“…as the souls are a part of the Creative Forces – the sun, the moon and the planets are as much affected by that influence of a birth, as affecting…” (2326-1)

With the help of Cayce’s readings and depth psychology, we have rediscovered these inner psychic connections that we have with each other through what Cayce called the superconscious.

At the present time we are becoming conscious of how all the countries in the outer world are interconnected – through travel, through trade, through war, and certainly through the World Wide Web. Lately, we have especially become aware of the economic interconnectedness and the domino effect that can happen worldwide when some of the major players experience financial problems.

What does astrology offer us during this period of such rapid change? Astrology and the Cayce readings offer a perspective that is very different from the scientific worldview. It is one that supports our interconnectedness with each other, nature, and the universe. In this worldview when we cause harm to one part of the cosmos we affect all…

The financial cycle in astrology is ruled by the cycle of two planets: Saturn and Pluto. When those planets conjunct each other (the last conjunction was 1982), it symbolizes the beginning of an upswing in the economic arena and possibly the beginning of a bull market. When they oppose each other (the last opposition was 2001) it reflects the beginning of a contraction in the financial markets. We are still in the contraction side of the cycle and will not see an upswing, according to astrology, until Saturn and Pluto form their next conjunction in January 2020 and possibly not until Pluto moves out of Capricorn in 2023.

From 2012 to 2015, a tight square (90°) connecting Uranus and Pluto will occur several times between 6° and 15° of Cardinal signs. This stressful aspect can indicate sudden (Uranus) changes and upheavals (Pluto) occurring and the necessity for being able to adapt quickly to these changes. Both of these planets are associated with fanatical actions so it will be a time when you can make sweeping changes in life but it is also important not to do so in a fanatical way. This is so important, as we are already seeing so much polarization of beliefs and attitudes in the world.

The Cayce readings had much to say about negotiating times of change such as we are now experiencing. There are excellent articles in this A.R.E. blog about economic healing and earth changes as described in the readings.

“It is also understood, comprehended by some, that a new order of conditions is to arise; that there must be many a purging in high places as well as low; that there must be the greater consideration of each individual, each soul being his brother’s keeper. There will then come about those circumstances in the political, the economic, and the whole relationships where there will be a leveling – or a greater comprehension of this need.” (3976-18)

Read the entire article exclusively in our Member-only section.

RAYE MATHIS is a member of the faculty at Atlantic University where, among the courses she mentors, is her Transformational Astrology course. She has a BA degree in mathematics, a Master's degree in clinical social work and has completed post-graduate work at the C. G. Jung Institute in Zurich, Switzerland. She has maintained an on-going astrological counseling practice for almost 40 years.Her column, The Astrologer's Corner, appears in the A.R.E.'s Venture Inward magazine available exclusively to Members by mail or online at EdgarCayce.org/members.

Raye will mentor the online eGroup Discover Your Vocational Talents Using Astrology as Your Guide from Jan. 19 to Feb. 15, 2011. Visit EdgarCayce.org/egroups for details.