Since 2008, we have been experiencing the astrological influences of Uranus squaring Pluto, reflected in the tumultuous changes that have been taking place in the world. Jupiter has been adding an expansive influence to the mix since the end of 2016, and will continue by opposing Uranus until September 2017, and square Pluto until August 2017.

Jupiter’s influence tends to increase whatever it touches. Expansion can be positive but can also go too far, bringing an over-expansion or too much risk. Therefore, the result of adding Jupiter to the influences of Uranus and Pluto can be constructive or destructive, and will probably be some of both.

Jupiter (Fire) in Libra (Air) gives the possibility of “hot air,” or as suggested,

...those influences in Jupiter, make for those benevolent feelings of expression that are builded rather as air castles often than as real activities.

In an individual’s chart, Jupiter sometimes indicates what psychology refers to as “inflation” or a “big ego”:

With Jupiter as the ruling influence... self thinks well of self’s opinions...

Combined with the influences of Uranus, there could be an expansion in humanitarian efforts, new discoveries that increase knowledge, and increasing interest in anything “out of the box” or on the cutting edge. Jupiter and Uranus call on us to let go of old ways of thinking—the status quo—and embrace the new, the different, and unusual.

Both planets represent a need for freedom and independence such as an increasing demand for more freedom from restraints and a need to throw off any perceived chains from relationships, work situations, or authority in general.

...those forces in Uranus...will make for rebellions and rebellious forces...

Jupiter also influences organized religion, especially the dogma and rules, and can reflect entrenched beliefs such as “I have the only Truth,” setting up a polarization where all types of rebellious influences can manifest. Saturn is now moving through Sagittarius (ruled by Jupiter) and adds to a possible increase in religious fanaticism and fundamentalism around the world.

The third influence in this mixture is Pluto. Jupiter with Pluto can indicate an increase in power that needs to be used to empower others, rather than overpowering them. With Uranus in the mix, feelings can intensify about over-throwing existing power structures. Pluto symbolizes a time to eliminate only what we do not need to move forward in life, not whatever we wish to eliminate.

The Uranus square Pluto aspect, in effect for several years already, has brought forward the issues of greed and the wealthy few (Pluto) versus the humanitarian need for everyone to have access to adequate resources (Uranus.) Jupiter added to this mixture can expand the constructive effects by increasing a desire for justice and more equality in society...or...it may expand the negative effects of the conflict between the “haves” and the “have nots.” Pluto indicates a need for a complete transformation—a death and rebirth.

In astrology, these outer planet aspects indicate that the earth is going though a period with the potential for increasing consciousness in the masses...or as reading 1100-27 states, that Pluto is a growing influence on “the ascendancy of man” and is bringing the development of humanity “towards the spiritual-minded influences.”

We all need to hold in mind the image that the awareness and consciousness of the masses are expanding and growing and this situation will be getting a kick-start from Jupiter. We need to keep in mind a theme highlighted in so many Cayce readings, including the following:

Moderation in all things.

As Cayce tells us, we can hold as an Ideal our ability to override any negative astrological influences and to use our Will to choose: rather than being part of the problems, we can be part of the solutions.

Excerpt from “The Astrologer’s Corner” column by Raye Mathis in the Jan-Mar 2017 issue of Venture Inward magazine available to A.R.E. members at Edgarcayce.org/members.

Raye Mathis is a member of the faculty at Atlantic University where she teaches Spiritual Crisis and Symbols and Mythology courses. She has a BA in mathematics, a Master's degree in clinical social work, and has completed post-graduate work at the C. G. Jung Institute in Zurich, Switzerland. She has maintained an on-going astrological counseling practice for almost 40 years.

See all by Raye Mathis 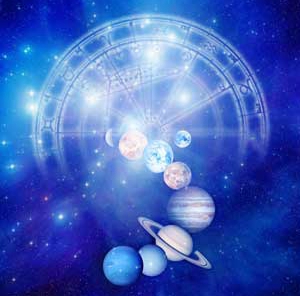 Dozens of astrology charts, plus numerology too, are on sale for a limited time. A.R.E. Members get any chart for $11.20! Nonmembers pay $14. (Sale ends Jul 2.)