Hemorrhoid inflammation is a condition that up to 50 percent of people will experience in their lifetime. Mild cases are often resolved through a combination of increased fiber and fluid intake, rest, and over-the-counter medication to manage symptoms, while severe cases may be treated through surgery. Edgar Cayce, often referred to as the “father of holistic medicine,” outlined a variety of treatments for this condition, including massage and manipulation, enemas (with specific mixtures), and an ointment (originally known as Tim, and now available as Tibbex*).

Hemorrhoids were, according to the readings given on this condition, a symptom of problems in the body’s eliminations, which would then cause inflammation, pain, and sometimes bleeding. “Again we find the effects of these conditions in the eliminations through the alimentary canal, and in the effect produced in the sphincter muscular forces we find the folds in that portion of the system becoming irritated in the form of hemorrhoids that give the distress at times… And we would make local applications…for those conditions in the portions of the system affected by the hemorrhoids. Using the combination of properties found in Tim will bring bettered conditions.” (678-2)

In reading 294-24, Cayce gave the formula for the hemorrhoid ointment that became known as “Tim.” This reading, which was volunteered and not given in response to a suggestion, states that the formula should be used for treatment of inflammation in and around the rectum. “This to be used as salve or lotion for such conditions or abrasions, internal or external. Apply that to the body. We will bring better relief and relations to the whole physical body, with the action of the physical when in the subconscious or subnormal conditions.”

Massage and manipulation, along with dietary changes, were often recommended to treat the root cause of the problem. Enemas (or colonics) were suggested to cleanse the colon and create an environment more conducive to healing. And finally, the topical ointment, Tim, was suggested to bring immediate relief of the symptoms as well as promoting healing in the affected tissues. “For the condition as gives trouble in the rectum at the present time, we would use a solution or a salve of this character…” (953-9) Tim was even suggested for use after a medical procedure, “we find that AFTER such treatments by the proctologist, it would be well to use such an ointment as Tim for the CORRECTING of the conditions as related to the circulation in those areas.” (1540-1)

In a later reading, Cayce described a “better formula” to replace Tim. With these improvements he said the new formula “does relieve, and with the proper precautions in diet and in exercise will remove hemorrhoids and piles, and do good for old sores also—as leg sores… The directions would be to apply as an ointment to affected portions once or twice each day. Rest as much as possible after application, with the feet elevated above the head. It'll cure it!” (Edgar Cayce Reading 1800-20) 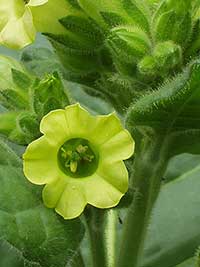 Interestingly, tobacco is one of the key ingredients of this formula. Though it is primarily associated with poor health today, and Cayce did frequently warn of the negative health effects that tobacco use and addiction cause, tobacco also has a healing history, as evidenced by its inclusion in this remedy. According to cultural literature, the Mayans used tobacco for asthma, insect bites, bowel complaints, fever, skin diseases, and urinary ailments. Native American tribes in New England would wash burns with a form of boiled tobacco, and to this day it remains a folk remedy for certain injuries and disorders.

According to Cayce, nicotine (which is present in every part of the tobacco plant and one of the most highly addictive compounds known) has an important quality of drawing out toxins (though it should not be used when the body is already eliminating toxins). “…for being over sensitive [he had been smoking too much], naturally the nicotine from the tobacco brings those poisons in system that must be eliminated, and when the body is overclogged (as such condition exists at present), this merely adds to that condition wherein distresses are produced.” (294-96) Modern studies have also indicated that tobacco contains anti-inflammatory properties.

Benzoin, another component of the “better formula” now known as Tibbex*, is a resin used as an antiseptic treatment for dry skin and as an expectorant for respiratory conditions, according to The Cayce Herbal (a collection of fact sheets on herbs recommended by Edgar Cayce, available at EdgarCayce.org/members as a resource in the Edgar Cayce readings database). Cayce recommended it as a component in inhalants (such as Herbal Breathing*) and in massage oils where it acted as “…a material aid to stimulating the superficial circulatory forces, and thus enabling the body to gain better control of the muscular forces…” The other key ingredient is Atomic Iodine*, which is electrified iodine often recommended by Cayce as an external antiseptic or, in minute doses taken under a physician’s supervision, as a thyroid supplement, according to the Cayce Health Database. 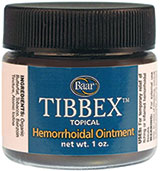 Tibbex*, a new offering from Baar Products, the Official Supplier of Cayce Care products, replicates this latter formula. “We’ve researched the beneficial historical uses and Cayce’s recommendations for tobacco to formulate a product that provides soothing relief to those suffering with hemorrhoids,” Bruce Baar, Doctor of Naturopathy (ND) said. “We are focused on manufacturing products that maximize the body’s full healing potential and are excited to introduce one of Cayce’s most unique and effective formulas. Tibbex has already begun to receive positive feedback and testimonials.”

"...I was delighted to hear that many of your customers have found Tibbex to be almost a miracle product in the healing of Hemorrhoidal conditions. I can only tell you, that has certainly proved to be true in my case. The relief from burning and itching occurred within an hour of applying the Tibbex Ointment and by the next day the inflammation seemed to be gone completely."
- M.R., Rensselaer, NY

Todd Burgin is a freelance writer and editor and former associate editor of Venture Inward magazine.