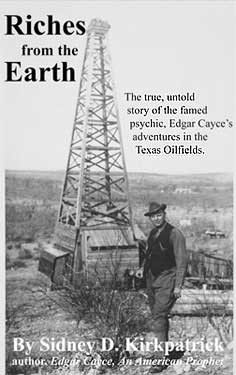 In my biography of Edgar Cayce, and in two previous articles for Venture Inward, my wife and I wrote at length about Edgar Cayce’s search for the Mother Pool, an enormous untapped sea of oil which was identified in the readings as being located in the vicinity of San Saba, Texas. Edgar and various partners, on a few occasions in the 1920s, undertook to find this oil with the goal of raising funds to build a hospital where patients could go to receive Cayce health treatments. Due to various forms of sabotage and insufficient funds, Edgar Cayce and his partners were never able to reach the Mother Pool. After Cayce’s death, numerous attempts were made to follow in his footsteps without the benefit of personal readings by Cayce.

The decision to try to use the Cayce trance readings to find the legendary Mother Pool was a bold and risky move. Cayce himself was well aware of not only the potential good that might come from such an endeavor, but also the risk. Over the course of his career, Cayce offered both advice and caution to those who would follow in his footsteps. Before even giving his first oil reading in 1919, he consulted the source about the morality and ethics of using psychic information to find oil, natural gas, and minerals. After all, experience had taught him that giving certain types of non-medical readings didn’t generate much long-term good, and could actually be quite harmful to not just himself but those who obtained them. Using psychic power to gamble at the race track or poker tables amounted to taking an unfair advantage over others. The same could be said for using psychic power to locate buried treasure. Hidden gold or other valuables didn’t necessarily belong to the person or people who went seeking it. The source, however, reassured Cayce that using the readings to help people find oil and natural gas could be a good thing. Petroleum, or riches from the earth, belonged to the people who owned the land it could be found on. Nothing was wrong with the notion of helping people—for a fee or percentage—to locate it, just as Edgar’s grandfather, a douser, had used his talents to help farmers find water.

Over the years, Cayce went on to give several hundred oil readings, many of which survive in the Cayce vault at A.R.E. headquarters, and many others which have been lost. The first requests came from people and companies looking for help drilling their own wells. The fantastic success that came from giving these early oil readings—several notable individuals became millionaires and one became a multi-millionaire—inspired Cayce to join friends and family to create his own oil prospecting partnership. Its purpose, from Cayce’s point of view, was to generate income to build a hospital where the readings could be used to heal the sick and help build a community that could, as he said, “Manifest the Love of God and Man.”

With this in mind, the Cayce Petroleum Company drilled at least two wells in central Texas in 1921, leased thousands of acres where he intended to drill, and gave readings on many different locations where earlier readings indicated oil could be found. But by 1924, Cayce had all but abandoned his dream of funding a hospital with revenue from oil prospecting. Time had proven that the Cayce readings seemed to help others in their search for oil, but while they pinpointed oil for Cayce, he and his partners could not seem to get to it and bring it to the surface. In several instances, his company was underfunded. At other times, outside interests resorted to devious means to undermine his work. Hugh Lynn Cayce often told the story of how one oil driller hired by Cayce dropped a tomb stone into a well shaft to make it look as if he had fulfilled his contract by drilling “down to the granite.” There was also suspicion that the sabotage occurred so that the Cayce leases and money to renew them would run out before they struck oil, and then the saboteurs could step in and find the oil for themselves. This may be one reason that in trance, Cayce instructed them to purchase 99 year leases, one of several suggestions that were ignored. On a more spiritual level, what may also have been true, however, was that Cayce and his partners did not share a psychic “accord” which the readings said was necessary if success was to be realized on a material level.

Oilman and one-time Cayce partner Curtis Willmott, perhaps more than anyone connected to Cayce’s oil ventures, understood this principal in both the abstract and literal sense. “All hands,” he told Edgar, “have to be pulling together with a common purpose.” Moreover, their common purpose couldn’t be the desire for riches, but “God’s purpose,” or the “First Purpose.” As Edgar himself later acknowledged: “There are cosmic or...[Divine] laws just as we have a penal law. [Treasure hunters must give up the idea of finding great wealth until] each one has come to the consciousness of making himself right with the Creative Forces”—a provision repeated many more times in the readings in years to come. The moment the “material” side of life takes over from the spiritual,” the source admonished, “conditions are materially turned,” and the seekers will lose, and literally become the enemy of one another.

Over the last several years, interested Cayce followers have been drawn together to support the search which initially began with David Mangum (a member of A.R.E. Houston) with the help of his son, Darin, who were subsequently joined by a Canadian and US based oil company, Integrative Energy (IE). IE, whose principal Rick Hatala is a long time member of the A.R.E, has been overseeing the project with the help and support of a small, highly dedicated management team and staff, board of directors, and board of advisors. Among the company’s unique features is their intention that profits are not only to be shared by the investors, but also to be used to develop clean alternative and new energy sources, provide education in the form of an Integrative Leadership & Learning Center, and to help fund Edgar Cayce’s Association for Research and Enlightenment (the A.R.E.).

Using the Cayce readings to locate the correct drilling location and obtaining the necessary leases to drill on property identified in the readings has turned out to be a daunting task with many internal and external conflicts that were resolved by adhering and acting in accord with universal principles of relationship. In Integrative Energy’s most recent drilling attempt last August, several locations where Cayce had previously drilled had been identified, but the specific leases that Cayce Petroleum drilled on in the 1920’s, could not be acquired. The company then relied on leading edge technologies to find nearby locations that might contain geological fractures which would, IE believed, connect them to the same Mother Pool discussed in the readings. Although in their first attempt they found oil, it was not in commercial quantities.

The lessons learned from the most recent drilling attempts has resulted in the team going back to conduct research in old land files, maps, the Cayce readings, and many other sources. The goal was to identify a new location—one more directly linked to where the readings indicated oil would be found. They now believe they may have identified several locations recommended by the readings, and are in the process of obtaining any leases on locations they don’t already have. This next well will be funded jointly by Integrative Energy and investors buying an interest in the Cayce well itself, with a continuing interest held by past IE investors.

If you would like to learn more about Edgar Cayce’s oil years, you can download a free copy of our booklet, “Riches from the Earth,” at www.integrativeenergyusa.com/cayce.

As both investors, and supporters of the Cayce work, my wife Nancy and I are waiting in earnest for drilling to begin again. We desire, like so many Cayce supporters, to see the readings once again be proven out and the Cayce legacy strengthened, and to see profits from oil go, perhaps for the first time, to a community that will use them for the betterment of mankind.