Get ready for another fast-paced, action-packed thriller with Tom Hanks as Harvard professor Robert Langdon searching to break the mysterious code of arcane symbols to discover the secret that will end the horror! Actually, in this latest thriller, professor Langdon is looking for a pyramid that contains the key to turning men into gods. Langdon is driven into this dark world to save his mentor, Peter Solomon, the kidnapped and mutilated CEO of the Smithsonian Institution (and an obvious pointer to Solomon’s Temple and the Masons). Anticipating huge demand, Doubleday printed 6.5 million copies of Dan Brown’s latest book, The Lost Symbol! (There are 81 million copies of The Da Vinci Code in print!)

In this newest mystery-thriller, Brown reveals what many have surmised, that Washington, D.C., was laid out according to a secret geometric code designed by the Freemasons, those most secretive, underground rulers of nations. Tradition holds that the men who built Solomon’s Temple founded Freemasonry and that many of the Founding Fathers of the United States were indeed Freemasons. Of the 56 persons who signed the Declaration of Independence in 1778, 15 of them were Masons. Of the 39 signers of the United States Constitution, 28 were high degree Masons. Fourteen presidents were openly Freemasons; nine more have been suspected of being Masons.

Key among Washington’s designers was Thomas Jefferson, who developed initial plans and modified the final plans for the capital district of the new nation—despite the hiring of Pierre L’Enfant as the primary architect. Jefferson, along with many of the Founding Fathers, incorporated the secret symbolism of Freemasonry into the new nation’s icons, notably the Great Seal of the nation—both sides of which appear on the one-dollar bill.

In one of Edgar Cayce’s famous past-life readings (1208-1), he identified Thomas Jefferson as the reincarnation of another nation builder who also built an enormous library: Alexander the Great, who built the renowned library of Alexandria, Egypt. Curiously, in 1814, when the first U.S. Library of Congress burned down, as had the great library in Alexandria, it was Thomas Jefferson’s library that replaced the lost Library of Congress.

Cayce also said, “Americanism, with the universal thought that is expressed and manifested in the brotherhood of man into group thought, as expressed by the Masonic Order, will be the eventual rule in the settlement of affairs in the world. Not that the world is to become a Masonic order, but the principles that are embraced in it will be the basis upon which the new order of peace is to be established.... When these things are considered, then, it is self-evident that individuals should be up and doing.” (1152-11)

What are some of the mottos and codes of the Masonic order? Dan Brown’s book focuses on the Scottish Rite Masonry, putting its seal on the front cover of his book.

In this we see the number 33, which is the highest degree awarded in the Scottish Rite; the double-headed eagle, which symbolizes East and West united; and the words Ordo ab chao, which means “Order from chaos.” Freemasonry espouses the values of brotherly love, relief (i.e., charity), and truth (i.e., good morals). The masonry part comes from the idea that, by applying in our lives the precepts of ancient master builders, we can all benefit—of course, those precepts are proprietary Masonic knowledge. Freemasonry believes in a Creative Principle, or force, from which everything emanates. The Freemasons use architectural symbolism to explain life.

One of their principal symbols is the square and architect’s compass, tools of the trade of masons.

As measuring instruments, the tools represent judgment and discernment. The compass, which is used to draw circles, represents the realm of the spiritual and eternity. It is symbolic of the defining and limiting principle, and also of infinite boundaries—the Kabbalah’s orbs on the Tree of Life. The square measures the angle, the symbol of earth and the realm of the material. The square represents fairness, balance, firmness, and the like, which is reflected in phrases such as "on the square" and "squared away." Something that is squared is something that is stable, a foundation for building upon. The square represents matter, and the architect’s compass symbolizes the spirit or mind. The architect’s compass straddles the square, representing the interdependence of the two. In the space between them, there is optionally placed a blazing star or other symbol of Light, representing truth or knowledge. Alternatively, there is often a letter G, said to represent God and/or Sacred Geometry.

In Dan Brown’s new book, the Washington Monument is at the center of the secret geometric grid, and its cap contains the lost secret! George Washington was a strong Mason, and inside the entrance to his monument, just about his image, is the Egyptian Winged Orb of God Consciousness, with two cobras, symbolizing the kundalini energy, or élan vital, and a five-pointed star, representing the five senses and appendages of the body.

Dan Brown’s premise that Washington, D.C. was secretly arranged according to a Masonic pattern will be a surprise to those living in Sandusky, Ohio, because, according to their town’s records, Hector Kilbourne, first “Worshipful Master” of the Sandusky Masonic Lodge, laid out the grid for the downtown of Sandusky, Ohio, in 1818, as the only city in the world originally laid out on Masonic symbols.

Cayce’s readings say, “Washington is and will be the center of the world. From those environs must go much that will rule or direct the thoughts of men of the world, everywhere.” (3003-1) 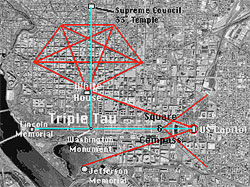 Here is the supposed layout of Washington. The triple Tau is the “Sacred Name” expressing the Trinity of the Divine and is secretly used in Masonic rites and design. The Grand Commander of the Ancient and Accepted Scottish Rite of Freemasonry, Albert Pike, wrote: “The triple Tau, in the center of a circle and a triangle (see illustration) typifies the Sacred Name; and represents the Sacred Triad of the Creating, Preserving, and Destroying Powers [Hindu gods Brahma, Vishnu, and Shiva, the latter is the destroyer of illusions); as well as the three great lights of Masonry: Wisdom, Strength, and Harmony.”

According to The Lost Symbol, the Masons also hid lost words of great power inside their secret grid. The evil one in this book is a bodybuilder, covered from head to toe in occult tattoos, who nicknames himself Mal’akh (Moloch), after one of the devils in Paradise Lost. He is determined to possess that magic word. Remember, Dan Brown writes entertaining fiction, no matter how much he makes it sound like fact!