Dealing with Grief, Death, and Loss
with the Edgar Cayce Readings
By Jacqueline S. Foreman 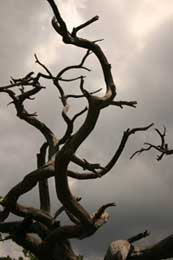 Death. It is a topic that most try their best to avoid. They may feel that talking about it may bring it into their lives or that speaking about dying is disrespectful somehow. But pioneers like Henry Reed, PhD; PMH Atwater; Raymond Moody, MD; and Elisabeth Kubler-Ross, MD not only spoke of death—they studied it for most of their adult lives. Raymond Moody coined the term NDE or Near-Death Experience in 1975 and Elisabeth Kubler-Ross created the five stages of grief that have become such a part of us now. Another person who did not fear death was Edgar Cayce and at times he gave readings to bereaved family members about their loved ones who crossed over. Here is an example:

"Yes, we have those circumstances and conditions attending the separation of the body and soul of [1408]. In giving that as would be helpful and constructive in the experience of each member of this family: As has been so aptly said, her life, her work, her love, is an example of Christian faith and fortitude. Hence for those that wait: It would be selfish to wish or desire conditions to be different. For in His wisdom He hath seen fit to leave—in the love as was manifested in the life—an example for each; in patience, in courage, in forbearance; in keeping a watchful, careful attention on the lives of each of the family. The body was so tired from the cares of the material world that the physical reactions were in the heart; that had been so ready to open itself to the needs of each, not only of the family but to all that knew, that even were acquainted with the body."
(Edgar Cayce Reading 1408-2)

This person is relaying to their family through Edgar Cayce that it was just her time to go, that her body had grown weak. It was not out of a lack of love for the family or a lack of concern. In fact, the concern was still there as she was "keeping a watchful, careful attention on the lives of each of the family."

This example demonstrates the following; first, Edgar Cayce was able to communicate with this spirit for the reading after her physical death. Second, it was important for the spirit to set her family at ease and to tell them they still were able to know what was going on. Finally, it shows that there is an existence, a life, a something after we leave this world.

Many people think you die and that is it, but what Edgar Cayce knew, what all of the other aforementioned researchers knew and still know, is that there is an existence after this life here on Earth. We might not know exactly what that is but we have seen glimpses thanks to the documented stories of Near-Death Experiences. Some are radiant, pleasant journeys; others are scary, hell-filled terrors. All leave the individual changed for life. Mr. Cayce summed it up beautifully in reading 1408-2:

Jacqueline Foreman has been a member of the A.R E. for 18 years. She is a paranormal investigator, published author, genealogist, certified life coach, photo journalist, and talk show host. After working for a major corporation in New York City as VP of Public Relations, Marketing Communications, and Human Resources, at the age of 36, she decided to focus all her efforts on her first loves: genealogical research, paranormal research, parapsychology, psychology, and helping those in need with her talk show Your Mental Health Talk Radio, which airs weekly at 5 p.m. (ET) online at Blogtalkradio.com/yourmentalhealth. You can also listen to or download her show free on iTunes by typing the name Jacqueline Foreman into the store's search feature. In 2012, she will finish her BS degree in Forensic Science and Criminalistics.