The fourth in a series of discussions from the Cayce health readings.

Depression is more than sadness or grief during a difficult situation. Depression is characterized by unrelenting or recurring negative feelings in body, mind, and spirit: dejection, lack of hope, sleep disruption, physical pain, feelings of worthlessness, and diminished ability to think or concentrate. When severely depressed, individuals may also have persistent thoughts of death and suicide.

Research suggests that there are probably many causes of depression. In recent years, great emphasis has been placed on the biology of depression. Scientists have explored the relationship between faulty chemistry in the nervous system and depressive symptoms. Specifically, research has focused on the chemical messengers (called neurotransmitters) which nerve cells use to communicate with each other. If there is a problem with certain neurotransmitters in the brain, communication between nerve cells may be inhibited.  When this chemical dysfunction occurs in the areas of the brain associated with emotion and cognition, depression may result. Presumably, the antidepressant drugs prescribed by medical doctors can therapeutically alter the chemical messengers used by nerve cells, resulting in better communication within the brain. According to the Centers for Disease Control (CDC), the number of Americans, especially women, receiving prescriptions for antidepressant medication has skyrocketed more than 400% in the past 15 years. Unfortunately, these medications are often ineffective and may come with significant side-effects.

THE CAYCE READING'S PERSPECTIVE ON DEPRESSION 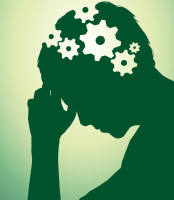 The Cayce material was decades ahead of medical research in providing graphic descriptions of nervous system pathology in cases of depression. The readings use the expression "lapse of nerve impulse" to portray the breakdown in nerve cell communication. The readings give many reasons for this characteristic "lapse in nerve impulse."  In numerous cases, hormone dysfunction was cited as a major source of the problem. The explanation found in the readings was that the nervous system is dependent upon the glands of the body to provide the chemicals essential for normal nerve cell functioning.  Significantly, modern medical research has also documented the involvement of endocrine glands in depression.

Environmental (including dietary) toxicity is another biological cause of depression found frequently in the readings. Some readings detail how the absorption of toxins into a nerve fiber can result in a "deadening" effect to the nervous system, which may lead to the characteristic "lapse in nerve impulse" of depression. Modern scientific research is currently examining the role of environmental and dietary toxins in psychiatric illnesses.

While the Cayce perspective has many similarities to the modern medical (biochemical) model of depression, there are important differences.  Instead of relying on medication, the readings recommended more natural methods, "holistic" therapies to help the body to bring its faulty biochemistry back into a healthy state.  Another difference is the role of mental and spiritual factors that may lead to depression of the nervous system. The readings describe how psychospiritual causes, such as unhealthy attitudes, or a lack of spiritual direction in a person's life, can precede nervous system pathology.

The readings contain many examples of mentally (i.e., psychosomatically) induced depression.  "Mind is the builder" is a prominent theme in the readings and is based upon the inherent association of mental processes with the nervous system. Self-condemnation was a particularly destructive mental pattern frequently noted in cases of depression. Failure to live up to an ideal (or even have an idea) was sometimes cited as a primary source of mental depression.

Although treatment recommendations mentioned in the readings varied, the therapies below represent some of the common suggestions for treating and preventing depression that are readily available to us today.

Depression is a significant problem in today’s world, with almost 10% of adult Americans suffering from clinical depression. (CDC, 2014.) Modern medical research is confirming the effectiveness of the timeless holistic therapies for depression recommended years ago in the Edgar Cayce readings.

Josephine B. Adamson, MD, MPH, CMT, is the Medical Director for Edgar Cayce’s A.R.E. She received her MD from Duke University’s School of Medicine and Master’s degree in Public Health from the University of North Carolina and is a graduate of the Cayce/Reilly® School of Massage. A former co-owner of a medical device company, she has a wealth of experience creating and maintaining health-related non- profit and for-profit businesses. She joined A.R.E. as part of the organization’s renewed focus on the health information, one of the most important, enduring legacies from the Edgar Cayce readings. She is responsible for overseeing all aspects of the health outreach and administration and interfacing with the stellar staff of the Cayce/Reilly School of Massage—which provides a comprehensive education in the art and science of therapeutic massage—and the holistic A.R.E. Health Center & Spa—which provides holistic therapies to clients from around the world in its oceanfront Virginia Beach, Va., setting complete with a Café.