Reading over the plot summary of the new film, Atlas Shrugged: Part II, one might wonder if part of the story was inspired by the psychic readings of Edgar Cayce harkening back to the early 19th Century. According to the movie's synopsis: The global economy is on the brink of collapse, unemployment tops 24%, and railroads are the primary mode of transportation. On the brink of an energy crisis, the protagonist, Dagny Taggart, discovers the prototype of a motor that draws energy from static electricity. This revolutionary "Galt motor" might be able to power the world. 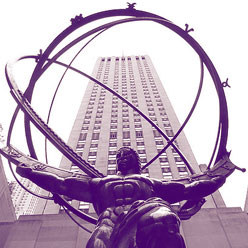 Like the story in Atlas Shrugged, the quest to build a motor capable of providing power for the world began for Edgar Cayce in February, 1928. According to the documented psychic readings, Edgar Cayce met inventor Marion L. Stansell [4666]*, through a friend, Mrs. [1010]* a housewife and neuropathist. Stansell had a near-death experience while stationed in France during World War I. During the experience, he had a vision and was able to view blueprints for a revolutionary motor that was designed in the spirit realm by Judge DeWitt Clinton, the former governor of New York, who was largely responsible for the construction of the Erie Canal.

In hopes of building the motor, Cayce introduced Stansell to Tim Brown [195]*, an auto parts manufacturer from Detroit, and Morton Blumenthal [900]*, a New York Stock Broker and early supporter of the Cayce Hospital. Over the next few months, Edgar Cayce gave a series of readings on what was called a "perpetual motion machine" that once started could continue to run indefinitely "by creating energy of its own source." The hope was that proceeds from this invention could fund the future work of Edgar Cayce.

A reading for Tim Brown on April 7, 1928, confirmed that the group had indeed understood the instructions and would be able to demonstrate the motor in the patent office as well as explain how the machine works while filing a patent. The theory of how the motor worked was recorded in the Reports:

"Theory of Motor Working: The phrase 'getting something from nothing' is incorrect—for we know there is no such a thing as nothing. We do know that everything is a force or some form of energy. We do not know the relation of these forces of energy to each other—or, in other words, the Relativity of Force—but we can assume that this relationship exists. Therefore, in the case of our motor, when we look at the two substances, water and air, we look at them as forces, and by using a mechanical contrivance to accentuate and retard these forces at the right time it is possible to utilize the resultant force or Component force. This is what has been done in [4666] Motor." Report of Edgar Cayce Reading 195-51

It was an unlikely partnership, and there was distrust amongst the group, but Edgar Cayce continued to give readings for the trio, trying to explain the details required to build the motor and provide the answers to numerous questions about diagrams that were created by the group. The readings touched on the topics of vibrations, the theory of relativity, gravitational forces, and more. While working on the motor, a letter from Brown indicated, "though the law of relativity which the machine demonstrates will for a time upset some of the present scientific statements..." (Report of Edgar Cayce Reading 195-56). 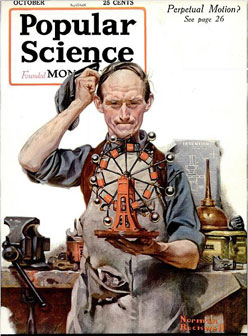 Initially, two motors were built, one for test purposes and the other one (a smaller size) to be used at the patent office when the application was made for a basic patent. Further readings suggested changes to the design and the reports suggest that it was rebuilt several times. However, the motor was never completed or fully operational and the project was abandoned.

In March of 1973, a letter was sent from A.R.E. to Stansell's daughter after he died. A new team of researchers was looking for copies of the original designs or the patent application from Stansell's files. The daughter responded that her father had worked on the motor until he died 10 years prior. She added, "As far as anyone knows no papers were ever found. It does seem a terrible shame." According to the Edgar Cayce Foundation, there are still individuals working on building a motor based on the readings of Edgar Cayce.

*The names of individuals who received readings were kept confidential through a numbering system developed by Edgar Cayce's secretary, Gladys Davis Turner.