The Book of the Dead (the Book) is the generic name of a set of ancient Egyptian funerary texts. According to archaeologists and scientists, the oldest dates from about 2400 BC and was discovered in the Pyramid of King Unas. The format of these texts varied and included pyramid wall carvings and painted design, elaborate images on coffins, and illustrated papyrus scrolls that were placed in the coffin or burial chamber of the deceased. A majority of the Books discovered date from 1550 BC to 50 BC. Each Book was created for an individual and would include his or her name and different chapters or "spells" with instructions to help the deceased navigate the Duat or underworld. Today, there are a recognized 192 different spells. These continue to reveal insight into ancient Egyptian beliefs about the nature of death and the afterlife.

The name The Book of the Dead has been used since 1842 when Karl Richard Lepsius published the first complete translation of a manuscript dated to the Ptolemaic dynasty. E.A. Wallis Budge's version of The Book of the Dead, originally published in 1895, is still in wide circulation. The correct translation for the title of this text should be The Book of Coming Forth by Day or The Book of Emerging Forth Into the Light as it covers the Egyptians' view of the afterlife. Edgar Cayce mentioned the book by name only eight times in his psychic readings, but he stressed the importance of the study and understanding of this material to our own spiritual and soul growth. 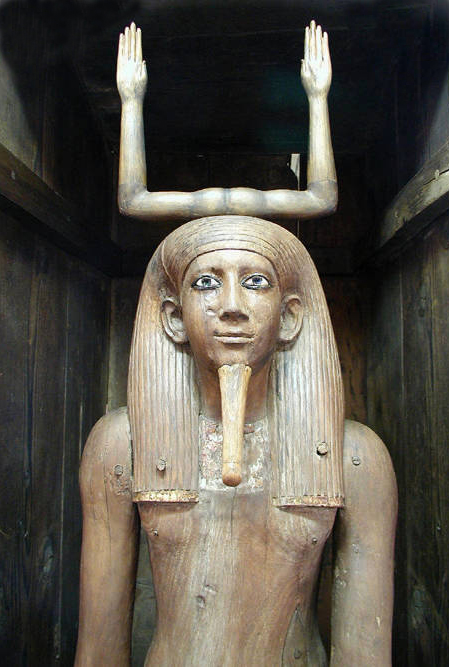 The Book describes the afterlife using a myriad of symbols and gods common to the Egyptian religion. The chapters of The Book were used in conjunction with mummification and ritual to preserve and transform the physical body and spirit. Egyptians recognized varied aspects of the soul, including the "ba" or spirit that was free to leave the tomb and the "ka" or life-force that was the individual personality of the deceased, and the "shut" or shadow. The traditionally held belief is that the Egyptians worshiped many gods, but I believe we will one day correctly understand that they were using symbols to explain differing facets of a single God, much the same as they viewed different aspects of a single Soul.

One of the best known rituals from The Book of the Dead is the Weighing of the Heart. The deceased was led by the god Anubis into the presence of Osiris to declare that they had not committed any sins against the moral code of the society. Then, the heart of the deceased was weighed against the Feather of Truth from the goddess Ma'at. The god Thoth recorded the results into the individual's Book of Life. If the heart was too heavy, it was eaten by the god Ammit and the deceased would then need a new heart to try the process again. 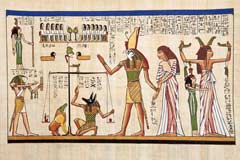 In April, 1933, an Architect asked Mr. Cayce if he would benefit from "study of the occult sciences" and if any particular book would be helpful. Mr. Cayce responded, "The study of those things pertaining to the early Egyptian activities…preferably for the entity…study the Book of the Dead." (Reading 322-2) The reading also stated that The Book was much older than currently believed.

Other life readings were given for individuals who were responsible for writing The Book circa 10,500 BC in Egypt. Ms. 115, a housewife in 1930, was responsible for "…learning the peoples first…chant for the dead…and the Book of the Dead were a portion of the entity's own inscribing." A different housewife, Ms. 454, was told that she was an entertainer and instrumental in "…writing much that is now a portion of the Book of the Dead."

A reading for another homemaker, Ms. 706, in 1934 suggested that she "would do well to study even the Book of the Dead, as it was called in the present—yet in that experience it was rather the Book of Life…it represents…the experience of a soul in its sojourn not only in…the land of night, but rather those things that make for the cleansing of a physical body for…expression through the senses or the emotions in the physical forces to the spiritual truths."

What I found to be the most insightful reading, and also the most difficult to understand, was a reading given in 1925 for Mr. Cayce himself. The reading opened with a question of how the "first laws concerning man's relations to the Higher Forces" was given to the people.

"The first laws…partook…of the study of self, the division of mind, the division of the solar systems, the division of man in the various spheres of existence through the earth plane and through the earth's solar system. The Book of the Dead…being the first of those that were written as the inscribed conditions necessary for the development in earth or in spirit planes. These, as we see, covered many various phases. About these were set many different ones to give the interpretation of same to the peoples in the various spheres that the individuals dwelled in that came together. Hence the difference in the manner of approaching the same sacrificial conditions…all using the Sun, the Moon, the Stars, as the emblems of the conditions necessary for the knowledge of those elements…same as the fish representing the water from which all were drawn out…"

Alison Ray works as marketing manager for Edgar Cayce’s A.R.E. where she is responsible for membership, public information, Venture Inward, and the Web. Before moving from Chicago to Virginia Beach, she was the Assistant Vice President of Discover Home Loans, a private label mortgage program under Morgan Stanley, offering home equity loans to Discover Cardmembers. A long-time Egypt enthusiast, she regularly practices meditation and Tai Chi, teaches Sunday School, and makes jewelry.