Edgar Cayce's Story of the Bible

Edgar Cayce, the twentieth century's most astoundingly accurate prophet, had the psychic gift of being able to put himself into a state of self-induced trance. In this state, Cayce, a man of little formal education and not scholarly by temperament, predicted such future events as the discovery of the Dead Sea Scrolls and the development of the laser beam. He was also capable of diagnosing illnesses that were beyond the knowledge of contemporary physicians—often for people thousands of miles away.

But outstanding among all his accomplishments as a clairvoyant, mystic and prophet was his ability—through psychic readings as well as in his life teachings—to make the Bible live! Here are Edgar Cayce's profoundly magnificent revelations about God's love, reincarnation, humankind's spiritual role, and the true meaning of the Bible from several hundred people were told that they had incarnations in biblical times.

From early childhood, Edgar Cayce was a devout Bible student and began teaching Sunday school, using the standard orthodox literature, while still in his teens. He continued this practice throughout his life. Many are still living who remember his outstanding ability as a Bible teacher, most of whom never knew him as a psychic or in any other capacity than as a teacher.

A few years before Edgar Cayce died he was persuaded by members of several local A.R.E. Study Groups, to teach a weekly interdenominational Bible Class starting with the Book of Genesis and going straight through the Bible. 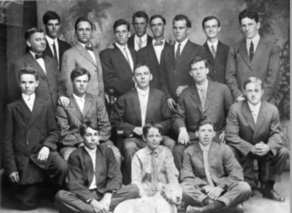 The Tuesday Night Bible Class, as it was called, wanted Edgar Cayce to incorporate in his teaching not only his own knowledge of the Bible but his understanding of the concepts presented through his psychic readings. The members had already been exposed to some of these concepts through their study of the lessons "in soul development" contained in Books I and II of A Search for God.

Having been Edgar Cayce's secretary since 1923, I was asked to take down in shorthand and transcribe the Bible minutes from these weekly discussions.

Robert Krajenke has shown extraordinary insight in paralleling Edgar Cayce's comments on the Bible, and blending them with the quotes from the Life readings having to do with Old Testament characters. It has long been my belief that Edgar Cayce's greatest contribution to this age was his making the Bible come alive for so many people. I saw this happen during his lifetime. Since his death I have seen it even more.

Now Robert Krajenke, through his discernment and compilation of Edgar Cayce's statements both in the conscious and psychic state, is perhaps again making the Bible live for the many who will read these pages.

Following is an excerpt from the first chapter. To "sneak-a-peek" at the table of contents and sample chapter, go to ARECatalog.com.

Hence, "darkness was upon the face of the Deep." This represents the spirit of ignorance, selfishness, the loss of the Divine Awareness which resulted when the Sons of God separated themselves from the Creator. As the above readings affirm, this occurred in spirit, before the earth was made. The earth, as written, was "without form and void."

As has been given, error or separation began before there appeared what we know as the Earth, the Heavens, or before Space was manifested.
Edgar Cayce Reading 262-115

In the beginning, when chaos existed in the creating of the earth, the Spirit of God moved over the face of same and out of chaos came the world—with its beauty in natural form, or in nature.
Edgar Cayce Reading 3976-8

The following reading reaffirms the concept which has already been advanced. The creation of matter was first only an expression of God. But it became a source of self-indulgence and selfish expression as His Sons and Daughters began to project their individual and personal influences into it.

For the spirit of God moved and that which is in matter came into being for the opportunities of . . . His Sons, His Daughters. These are ever spoken of as One. Then came that as sought self-indulgence, self-glorification; and there was the beginning of warring among themselves for activity—still in Spirit. Then those that had made selfish movements moved into that which was and is Opportunity, and there came life into same.
Edgar Cayce Reading 262-114

Thus, in the reading's view, the earth was not created out of a Void or from Nothingness. Rather, His spirit moved over the chaos and rebellion, and from these diverse elements He created Balance and Harmony, and established the foundations of the World.

The World became a place of "Opportunity" through which souls could begin to realize their separation from their spiritual surroundings.

Based on the Foreword to Edgar Cayce's Story of the Bible by Robert W. Krajenke written by Gladys Davis Turner.

Gladys Davis Turner (1905-1986) In 1923, Edgar Cayce hired Gladys Davis as stenographer to document all of his psychic readings. She served as the recorder of the readings until Cayce's death in 1945. She not only shouldered the responsibility of writing down in shorthand every word Mr. Cayce uttered in the over 14,000 readings he gave during that period, but she ensured their preservation and proper use by those who would read them in the generations of seekers who followed. In addition to taking down the readings, she transcribed them—over 100,000 pages—initially on a manual typewriter, twice.