I’m pleased to share a brief update on Edgar Cayce’s Aurascope, the device I wrote about in the Jul-Sep 2014 issue of the A.R.E.’s Venture Inward magazine. To best understand what we are doing, I encourage you to read Auras, by Edgar Cayce which is included in the book Edgar Cayce on Auras & Colors (A.R.E. Press, 2011) by Kevin J. Todeschi and Carol Ann Liaros, available from book retailers and ARECatalog.com.

Upwards of 200 people have now had the opportunity to try the Cayce Aurascope, and nearly all have reported seeing color patterns and phenomena not unlike those described by Cayce, who was able to see auras without the assistance of such a device. This is not definitive evidence that someday soon the device will be used as a non-invasive means of diagnosing illness, as Cayce suggested would be possible. Rather, the vast majority of people who have tried the device under optimal conditions (for 6-10 minutes in full sunlight) see patterns of color that appear to be different from what can normally be seen from the refraction of light through a prism. Assuming that we are seeing through the Aurascope something along the lines of what Cayce saw, the good news is that a great many of us who would not otherwise think of ourselves as psychically talented will have an opportunity to judge the truth of psychic phenomena for themselves. To my mind, never has the Cayce phrase, “All can do it,” held such resonance.

Taking the next logical step—understanding how to interpret the patterns of colors that one sees—will require testing. Does a particular shade of orange indicate potential kidney trouble? Do healers emanate pure emerald green with a dash of blue? Do shafts of colored light coming down over one’s shoulder indicate that one may be receiving Divine guidance? Cayce suggested all of these things, and much more. As Kevin J. Todeschi has pointed out in Edgar Cayce on Auras & Colors, the aura not only provides a pictorial representation of an individual’s health, but also their thoughts, talents, and life potentials. It’s a barometer of the whole self—body, mind, and spirit.

Only two operational Aurascopes have yet been assembled. All that can be said with certainty is that three individuals (different ages, and without an obvious common denominator) haven’t been able to see the effect, several individuals using progressive bifocals have had to remove their glasses to make the device work for them, and people with the ability to differentiate subtle variations in color have the easiest time. A professional cinematographer saw more in 10 minutes than I experienced over several months. One person has been so adept using the device that she may actually be successfully diagnosing illness. The vast majority of us, however, are too overwhelmed by the initial experience (it’s thrilling!) to interpret what we are seeing. (I became a true champion of the device when viewing a woman eight-months pregnant. Her belly looked to me like a rippling pool of rainbows.) Further, as I referenced in the article, it is becoming clear that the longer one practices with the Aurascope the easier it is to experience the effect, and the greater one’s ability. With time and practice, one may actually develop the ability to see auras without use of the device (as Cayce said they would). At this point, however, it's too early to say. 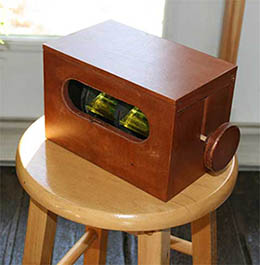 The latest prototype (with an easily removable housing)

The only comprehensive way to test the technology is to produce and distribute more Aurascopes. Since the device’s official debut at the A.R.E. Congress in June, 2014, a committee of A.R.E. members have come together to try to develop the device; incorporation papers have been filed; and a patent application has been submitted. Just as other Cayce products have been manufactured and sold, a portion of the proceeds will go directly to the A.R.E. As the major expense of producing the Aurascope is the cost of the prisms, the more prisms we can order at wholesale prices, the less each unit will cost. Our goal is to produce the device for several hundred dollars, which is a fraction of the $5,000 that the “A Search for God” study group in Miami paid for their prototypes. To this end, we have requested bids from several optical manufacturers and will be experimenting with new construction designs. The current model (pictured) uses finely cut prisms in a hand-tooled hard-wood paddlewheel-design viewer. Less costly plastic prisms in a molded plastic viewer may work equally well and result in huge savings. 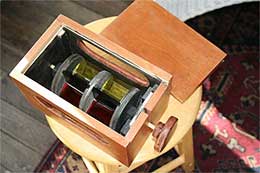 The next step will be testing. Our intention is to circulate the first Aurascopes to established “A Search for God” study groups of dedicated individuals already steeped in the Cayce work. Team efforts to study the effect will be greatly appreciated. Further, we will need to create a questionnaire that viewers testing the effect can use to document their experience. We will want to know, for example, if all viewers looking at the same individual are seeing the same color patterns. What are the optimum conditions to use the device? How does one’s aura change throughout the course of a day, a week, months, or years? Do particular illnesses or conditions manifest in distinct and identifiable color patterns? Does an individual’s aura change while they are meditating or in prayer? How long does an individual’s aura remain with their physical body after they transition from this life? What does a newborn’s aura look like?

These and many other questions need to be answered. If you or someone you know are interested in helping compile a list of protocols and questions which we can use to study the device, your help will be greatly appreciated. Please send us your questions and suggestions. One system we have been using to document the experience has been to distribute a 64-pack of Crayola crayons and a simple line drawing of a human torso. After using the Aurascope, the viewer is asked to draw/color what they have seen. This system, in combination with a detailed questionnaire, may be the way to proceed. Before moving forward along these lines, however, we would especially welcome volunteer help from people trained in scientific methodology. (I’m a writer, not a scientist!)

Out of such an endeavor may come a wide range of new information that will carry our work, and Cayce’s work, into the future. Consider what development of the microscope meant for biologists. We may also be able to locate individuals (and groups) who are most adept at using the device, and who may, by their talents, consistently (and non-invasively), correctly diagnose illness, a skill demonstrated by professional medical initiatives.

We are excited to move forward and encourage your participation. Some of you have already (patiently) expressed an interest in having an Aurascope, or want a set of prisms so you can build one for yourself. We are working to make this possible.

If you are interested in trying the Aurascope out for yourself, I’ll be bringing one with me to all events where I will be lecturing on Cayce including the day-long Edgar Cayce event on October 25, in Ottawa, Canada (EdgarCayceCanada.com). Please look for my wife, Nancy, and me at A.R.E. events in 2015! (EdgarCayce.org/FieldConferences). If you haven’t already joined Edgar Cayce’s Association for Research and Enlightenment (A.R.E.), we encourage you to do so, and to study the Aurascope readings for yourself. To join, visit Edgarcayce.org/Join.

For future updates, please send us an eMail: aurascope@info-1.com.

Sidney D. Kirkpatrick III Award-winning documentary filmmaker and best-selling author, Sidney D. Kirkpatrick is a graduate of Kent School, in Kent, Conn.; Hampshire College, in Amherst, Mass.; and NYU Film School in New York. His critically acclaimed books include A Cast of Killers, Turning the Tide, Hitler's Holy Relics, and Edgar Cayce: An American Prophet, which is a biography of Edgar Cayce published in September 2000 that has been described by The New Yorker as "a codex for the New Age." Kirkpatrick is also the producer and director of My Father the President, a much-loved documentary film on President Theodore Roosevelt as seen through the eyes of his daughter Ethel Roosevelt Derby. He and his wife Nancy regularly host events at their Portage Inn Bed & Breakfast (PortageInn.ca) in Muskoka, Ontario. Our next book,True Tales from the Edgar Cayce Archives: Lives Touched and Lessons Learned from the Sleeping Prophet, will be released by the A.R.E. in the spring of 2015.