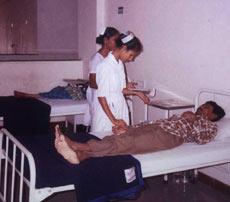 When I first learned about Edgar Cayce's work, I had no idea that 41 years later, I would be instrumental in providing one of Cayce's remedies to promote healing for thousands of people in India.

I first read about Cayce in 1970 while serving in South Vietnam. I joined my first A Search for God (ASFG) group shortly afterward, and have since attended and started study groups in several states with my wife, June. In 2000, while working in Philadelphia, I met a missionary from Zambia. Learning that the remedies the missionary was using against malaria were becoming ineffective, I supplied him with an energized form of iodine (though this would not work when used alone against the more resistant cases of malaria).

Continuing my efforts to help, I found that a more highly recommended Cayce remedy was made using the formula listed in reading 358-1. As word spread in the holistic health community about the success of this product, June and I bought a building in Texas and turned it into a factory to produce larger quantities of this formula.

About four years ago, two doctors in India became interested in using the iodine product. At first we sold them the iodine at a reduced cost, but soon it became clear that it was the charitable mission of our company to donate it to them instead. In 2009 Drs. Chakradhar and Jagadish took a supply of the Cayce iodine from their offices in Bangalore, India, to a poorer rural area on the coast near Mangalore. There was an epidemic of chikungunya fever occurring. While typically nonfatal, this debilitating illness is caused by a virus related to dengue fever and is transmitted by mosquitoes. Symptoms include fever, headache, fatigue, nausea, vomiting, muscle pain, rash, and joint pain and can last for days or weeks. They soon sent this email:

We returned to Bangalore this morning and also received the Magnascent iodine. It was a great experience to work with chikungunya patients. There were hundreds of cases… affecting entire family members. They have no access or cannot afford expensive blood tests. So we have to treat them based on clinical symptoms. What we found out was those who were treated with Magnascent iodine have recovered from symptoms earlier than [those who] didn't… I wish we had more funds to do lab tests, imaging studies, etc. We [are] much grateful to you for helping so many patients…You have motivated us to do more service… Please do send more iodine if possible. 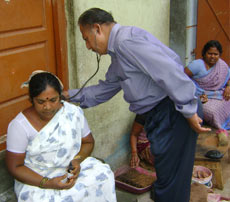 This year, we have sent about 1,400 ounces so far. Ideally, the doctors will be able to treat 2,000 families and will be able to test many of those to confirm their diagnosis, so that this information can be published. The doctors in India will also be treating for malaria, as indicated by the following email from the same time period:

This work continues at present, with the hope that the Cayce suggestion from 80 years ago may well be the answer which is badly needed for epidemics troubling the world today.

John Brookshire and his wife June own Shield Bearer, Inc., which manufactures MagNascent Iodine based on the Cayce readings. He holds a degree in physics and worked in the aerospace industry for 30 years. His design work on the Gulfstream V airplane was the result of a repeated dream that the plane's center of gravity was in the wrong place. After the dream, he convinced management to redesign the craft and move the wing 12" forward. It turned out to be the best aircraft ever built by the company. He became involved in the production of iodine for a missionary in Zambia who was having trouble treating malaria. After researching the Edgar Cayce readings, he designed a process to produce a consumable form of nascent iodine which is being used to treat malaria and other diseases in India and Africa. To learn more about their work, visit Magnascent.com. This article was written by June Brookshire.

Awakening to Love in a Time of Fear

MAY: The Collective Consciousness and How It Affects Our Lives Today