Edgar Evans Cayce, the youngest son of Edgar and Gertrude Cayce, passed away peacefully on February 15, 2013.

Described as a renaissance man by those who knew him best, he excelled in both academics and sports. He was the Valedictorian of Oceana High School in 1935, and captain of the school’s football team. During World War II, he served his country as a captain in the Army Signal Corps. 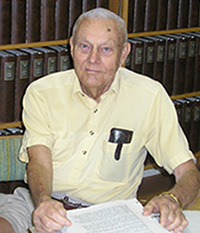 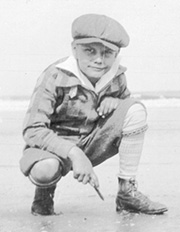 His earliest recollection of being helped by his psychic father was a physical reading given when he was seven. He was standing near a fireplace when a spark from the fire ignited the leg of his pajamas. The pajamas burst into flame but were quickly extinguished by his mother, who smothered the flames with a shirt. The accident caused serious burns from his ankle to his back. A remedy described in a psychic reading given by his father successfully treated the injury.

On another occasion, when Edgar Evans was in high school, he asked his father for information that would help him choose a career. The reading given recommended the field of engineering and said that he could get a scholarship from Duke University. He followed that advice, got a scholarship from Duke, and became an electrical engineer. He was a member of the electrical engineering honor society Eta Kappa Nu and had a 40-year career with Virginia Power.

Edgar Evans was an expert resource on Atlantis and authored Edgar Cayce on Atlantis and co-authored Mysteries of Atlantis along with two other books For many decades he was also a dedicated member of the Board of Trustees of the A.R.E., the organization founded by his father in 1931.

He was frequently asked to describe what it was like having a psychic for a father, to which his reply was that he didn’t feel it was all that different from having any other father. He described Edgar Cayce as being a loving husband and father, a great gardener, a very good carpenter, an enthusiastic fisherman, and someone who could talk to anybody.

Extremely fit and in excellent health well past his 90th birthday, Edgar Evans attributed his wellbeing to a healthy diet and exercise. Even while in his early 90s, he mowed his own yard and played volleyball three times a week.

Edgar Evans Cayce was predeceased by his wife (and high school sweetheart) of 69 years, Kat Cayce. He is survived by his two children, E. Evans Cayce (along with his wife, Valerie) and Gail C. Schwartzer (along with her husband, Joe), three grandsons, and four great-grandchildren. His family described him as a “direct, no-nonsense, engaged, multi-dimensional man who has always been about love, understanding, and acceptance.” 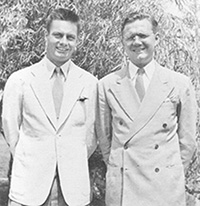 The following excerpt from his high school address of 1935 epitomizes his life:

“Our real place in life can never be measured by external signs. It will depend upon how close has been our personal relation with our God; how much we give to others; and how much peace there is within as a result of knowing ourselves.”

Kevin J. Todesch is the Executive Director and CEO of Edgar Cayce’s A.R.E. and Atlantic University, as well as a popular author and conference speaker. As both student and teacher of the Cayce material for more than thirty years, he has lectured on five continents. A prolific writer, he is the author of twenty books including best-sellers Edgar Cayce on the Akashic Records, Edgar Cayce on Soul Mates, and Edgar Cayce on Vibrations. His latest book, Edgar Cayce on Auras & Colors: Learn to Understand Color and See Auras was written with professional psychic Carol Ann Liaros and explores tools for seeing the human aura and for understanding the interpretation of color.