Exploring the Archives: The History of the Edgar Cayce Foundation

Hidden within in the Edgar Cayce Foundation vault today are treasures to inspire and provide insight into the personal life of the Cayce family. From the puzzles that Edgar loved to work to the registration for a new game to family postcards, the vault preserves and protects this history for future generations.

During Edgar Cayce's lifetime (1877-1945), all of the records of his psychic readings were his personal property. After Edgar Cayce and his wife Gertrude died in 1945, the records became the property of their sons, Hugh Lynn Cayce and Edgar Evans Cayce, and secretary Gladys Davis Turner (pictured below).

February 1948, the Edgar Cayce Foundation (E.C.F.) was chartered by the Commonwealth of Virginia to provide sole permanent legal and physical custody of historical resources including the preservation of:

Over the years, the physical vault has had many incarnations: 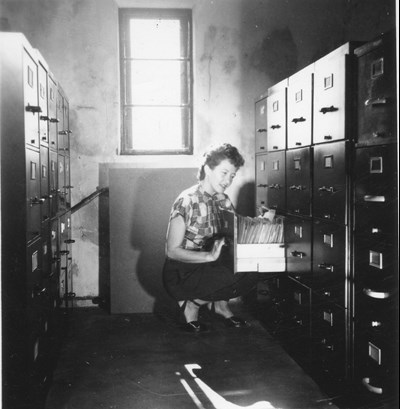 The original vault was located within the Cayce home on Arctic Crescent in Virginia Beach. The vault dimensions were 9 ft. x 9 ft. with seven file cabinets on each side. The location served as A.R.E. Headquarters at the time.

The vault was moved near its current location when A.R.E. repurchased the original Edgar Cayce Hospital building on 67th Street at Atlantic Avenue in Virginia Beach. 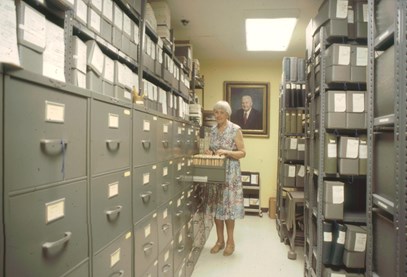 The vault relocated into an expanded space when the A.R.E. Library, Conference, and Visitor Center was built on the campus. 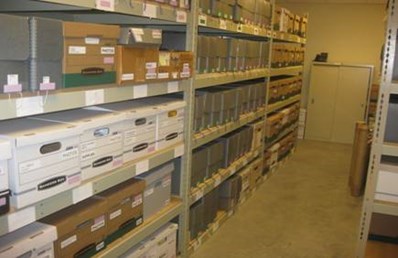 The vault came to its current home in the de Laski Education Center and has tripled in size. 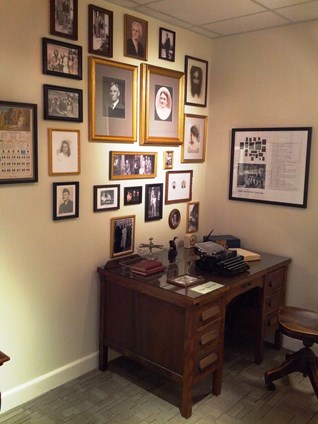 “Edgar Cayce’s Study as it was in April, 1944” is the notation written by Gladys Davis, Edgar Cayce’s secretary, on the back of the original photograph which inspired the recreation of this permanent exhibit. Located just outside of the vault, every detail was painstakingly researched by Karen Davis to match the original (view full size image).

On display are restored copies of photographs from Edgar Cayce’s personal collection.  All of the photos he had on the wall of his office are images of his family or images of him with his family except for the artwork of Jesus Christ by Gabriel Max. More than half of the pictures were made by him, including the frames.

The replica desk props, which were funded through contributions, include a 1930s Remington Rand typewriter, a 1940s war alarm clock, a fountain pen from the 1930s, and a calendar from April, 1944.

Items on Edgar’s desk  include copies of actual correspondence from Edgar Cayce to Thomas Sugrue, dated April 1, 1944, a special edition of Cayce’s biography There is a River by Thomas Sugure; signed by Edgar Cayce, A Search for God, Book I from the first printing, A.R.E.’s seal, Edgar Cayce’s nameplate, and a 1944 datebook with the scheduled readings.

This project was made possible through the support of our members and their donations. Frames were designed and constructed by Lyman Speckheuer, owner of a local Virginia Beach art studio, Fine Art Specialists.

A.R.E. Members can learn more by reading the Treasures from the Vault column in our member magazine Venture Inward at EdgarCayce.org/members. For a tour of the vault with Sidney Kirkpatrick, visit www.edgarcayce.org/vault. To contribute to the preservation of materials in the vault, please support the Edgar Cayce Foundation.

The mission of the Edgar Cayce Foundation is to preserve, protect, and make accessible the records for further research to us all!