If you've had the good fortune of meeting someone for the first time and instantly recognizing them as a soul you knew and loved in a previous lifetime, you can begin to understand the extraordinary bond shared by Gladys Davis, Edgar Cayce's secretary and archivist, and Micki Kluge. It is that friendship that is chronicled in Micki's new book: Reflections of Gladness: Edgar Cayce's Vision of the Work Shared in a Collection of Memories of Gladys Davis. 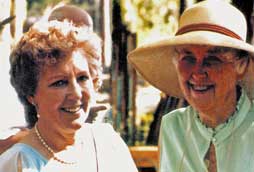 Micki met Gladys in the late 1960s at an A.R.E. conference in Virginia Beach. The two instantly recognized each other from previous lifetimes, but interestingly, not from the same incarnations. Micki remembered Gladys as the infant daughter of Ra-Ta (Edgar Cayce) and Isis (Gertrude Cayce) that she cared for; Gladys recognized Micki as a dear friend from an 8th-century BC Persian lifetime. Both women instantly gravitated to the other.

"There was no one else around us; no other humans in the periphery of our conversation," Micki said. "It was wonderful that the Good Lord allowed us to touch base again and that we didn't have to share that moment with anybody else. From the minute Gladys and I first got to know each other, she felt as much like a sister to me as I felt to her."

Over their 25-year friendship, Gladys and Micki had many intimate conversations, sharing details about their current life as well triggering memories of past lives they had shared. "We could tune in and in our mind's eye, not only see the reference but also the landscape, and thus paint a broader scene of the memory that either of us asked about."

Through their many conversations, Micki came to understand and appreciate the role that Gladys played in the life of Edgar Cayce, and more importantly, to the A.R.E.

"Edgar Cayce's translations of the Akashic Records did for souls in search of spiritual truths what the Hubble Space Telescope does for stargazers and astronomers," wrote Micki. "Gladys archived each snapshot of Edgar Cayce's experience as vividly as Hubble's celestial transmissions, magnifying his accomplishments as a transmitter of spiritual inspiration."

Those desiring a knowledge of various beliefs embodying these theories will find of interest those of Plato, Pythagoras, the Indian religions, African tribal religions, American Indian religions, Egyptian and Persian Mysteries, Druidic and Christian mysticism. Among the modern philosophies and cults Theosophy, Rosicrucianism and the Order of Christian Mystics present interpretations of the subject. Spirtualism is divided as to the truth of this theory. Information through mediums in America may be said to discount it, while that given through those in England and on the continent substantiates the belief.

Micki further wrote: "In re-establishing a school of inspiration for entities seeking further enlightenment, Edgar Cayce's and Gladys's efforts magnetized the spirit of cooperation, which soon drew global support of kindred souls whose mission was to share the 'Work'. From their arrival in Virginia in September 1925, their mission attracted workers who had previously contributed their services toward its fulfillment."

The stories of those kindred souls and the years they spent together, as shared by Gladys, became the impetus for Micki's book.

"We began to realize that the younger generation involved in the A.R.E. work did not know Gladys," Micki related. "We felt there should be a link to the knowledge of the pioneers of that work that is being carried on today. To do that, we wanted to create a record by the people who knew Gladys, the hand-me-down stories from people who were actually there during the time she was there. For Gladys's generation and mine, that is a fast closing door. Our idea was for the people who were still alive to lay down some tracks for future generations to ride on."

To that end, the book contains wonderful vignettes of touching memories shared by the people who knew and loved Gladys, but none as heartfelt as the loving tribute by the author herself.

"Gladys and I were drawn together, not because of similarities of personalities, but in answer to a need that required diversification," Micki wrote. "The contrast was significant in our mutual need to serve. She supplied the cream. I churned it. Then, she gleaned the butter to spread on life's plain bread, and we shared with everyone at the table."

Fittingly, Micki continues to share that bread "with everyone at the table" each year at Gladys's annual January 30 birthday luncheon. Although gone from the physical plane since 1986, Gladys' presence is felt in the hearts of those whose lives she touched, most especially her dearest friend Micki Kluge.

Micki Kluge will be signing copies of her book at the Author's Showcase at the 80th Anniversary A.R.E. Members Congress on Sunday, June 19, from 3-4 p.m. A portion of the proceeds from her book sales is being donated to the Gladys Davis Endowment Fund, which Micki founded in 2006 to help support dissemination of the Cayce readings that Gladys loved so much. For details on buying the book visit: www.reflectionsofgladness.com

[The Gladys Davis Endowment Fund is part of A.R.E.'s endowment and the annual interest is used to support the Cayce work. The interest from this fund has already been used to create the Gladys Davis Turner Meeting Room in the A.R.E. Visitors Center.]

Joanne DiMaggio, MA, is coordinator for Edgar Cayce's A.R.E. Charlottesville area team and the president of the Atlantic University Alumni Association. She will speak at the conference A Spiritual Roadmap for Enlightened Living: Edgar Cayce's Tools for Transformation and Guidance, August 19-21 at A.R.E. HQ in Virginia Beach. Visit EdgarCayce.org/conferences or call 888-273-0020 for information.