Incals in Florida
By John Fuhler

The readings document one of the most interesting stories of the peopling of North America:

Before this…we find the entity was in the land of its present nativity, in what is now known as…Florida; during those periods when there were those settlings…from the lands of On (?) or the Inca….and those that gathered upon what is now the east portion of Alabama and Florida…
(Edgar Cayce Reading 1298-1) 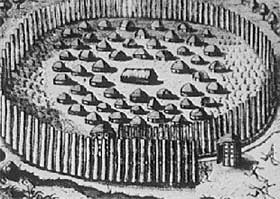 A sketch by Le Moyne that shows a Timucua village.
Source: Wikipedia


How and when these South American Indians arrived in Florida is a story which began about the time of the first upheavals in Atlantis.

…the entity was in the Peruvian land. For, with the first upheavals in Atlantis, the entity was among those who journeyed…to what later became the Inca land. (Edgar Cayce Reading 3042-1)

…the entity was in the Inca or Peruvian land, when there had been the first of the upheavals in the Atlantean land…
(Edgar Cayce Reading 2829-1)

At some time after these Atlantean refugees had established themselves in the land, the Ohums conquered them.

In the one before this we find in that land now known as the Peruvian, or Ecuador. The entity then was among the Ohums…of that period, and among the peoples who journeyed in and conquered the peoples from the Atlantean upheaval, or the first of the series of upheavals that occurred.
(Edgar Cayce Reading 99-6)

The Ohum occupation of the Peruvian lands began prior to the coming of the Incals and the Poseidians. It continued until after the sinking of southern Atlantis.

In the one before this we find in that land known now as the Peruvian, during the period of the Ohums…before Incals and the peoples of the Poseidian land entered.
(Edgar Cayce Reading 1916-5)

In the one before this we find in that land now known as Peruvian, the entity being among the Ohums…when there were the changes being wrought in the land through the inflow of the peoples from Poseidia and Latinia…that southernmost portion of that land [Atlantis] sunk…
(Edgar Cayce Reading 488-5)

In turn the Ohums were subjugated by the Inca.

We find in that period when the Arms [Aymaras? Ohms were?] in that land now known as through [Peru, though] the entity then [was] among those that ruled in the land and being subjugated by the Inco [Inca?]…that took possession of the land from those that ruled.
(Edgar Cayce Reading 4292-1)

…the entity was within that same Peruvian land, though not exactly in the same territory; rather in that from a part of the Atlantean, as well as a part of what became later the On [?Og?] or the Incal land…
(Edgar Cayce Reading 1637-1)

…the entity was in the land now known as the Inca, or Peruvian, or Ecuador land…
(Edgar Cayce Reading 1895-1)

From the readings we learn that these people included good engineers, and that they were great explorers and adventurers who traveled to the Yucatan, Central America, Argentina, and the American Southwest. Current archaeological data suggest that the earliest evidence of agriculture and the earliest known precincts with mounds and plazas in the Western Hemisphere occur in Peru. i 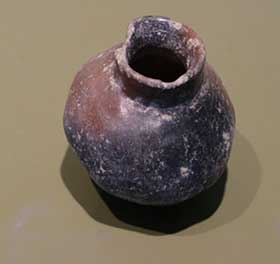 Out of this culture did Ms. 1298 travel to Florida, though at a much later date. This South American connection has been demonstrated linguistically.

In 1984 Julian Granberry published the first edition of A Grammar and Dictionary of the Timucua Language.ii In it he demonstrated that the Timucua, a group of Indians who resided in northern Florida and southern Georgia, were South American émigrés from the area of modern Colombia and Venezuela. The language family to which Timucua belongs encompasses an area extending down the Andes into Argentina, up the Isthmus of Panama into Central America, and deep into the Amazon jungles.iii Based on the measures available to him, Granberry estimated these South American immigrants arrived by at least 4,000 years ago. The trade network established by these seafaring adventurers was centered in what is now Colombia. The main trade item was pottery. In fact, the earliest pottery in North America appears on the Georgia and Florida coast, the direct result of this trade network. The Timucua were not the first South American traders to make the journey.iv

The more than four dozen readings pertaining to the Peruvian land make several assertions, including Incal influence in the American Southwest, that have yet to be demonstrated by the sciences. But, given the veracity of the ‘Incal’ influence in Florida, we can expect many interesting discoveries in the decades to come.