Archaeologists have found the underground chamber of an official Mayan calendar chronicler! And what his inscriptions reveal is that there is another Age following the present "Age of Movement" that ends on this coming Winter Solstice, December 21, 2012. The world does not end—Hooray! In fact, it goes on and on and on. William Saturno of Boston University, the archaeologist who manages the new discovery, published an article in the journal Science, and writes: "The Maya calendar is going to keep going and keep going for billions, trillions, octillions of years into the future, a huge number that we can't even wrap our heads around." 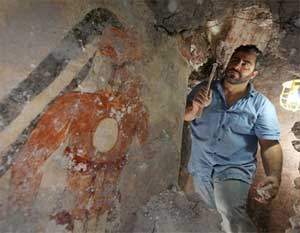 Tyrone Turner, National Geographic
Archaeologist William Saturno of Boston University excavates a house in the ruins of the Maya city of Xultun.

What Saturno found turned out to be a well-preserved mural that includes the oldest known Mayan calendar ever found. And just like the Maya Long Count calendar, which serves as the basis for the apocalypse myth, this calendar extends indefinitely into the future.

This new discovery provides us with clear evidence that the end of this 5,128 cycle marks the beginning of a new cycle! According to Mayan legend, the current world—the one in which we are all currently living—is an era of major change, the so-called Age of Movement.

Curiously, the newly discovered Mayan calendar in the chronicler's chamber has cycles of time recording 17 baktuns, rather than the standard 13.

The new finding shows that the calculations include a time span longer than 6,000 years that could extend well beyond 2012. Anthony Aveni of Colgate University in Hamilton, N.Y., an expert on Mayan astronomy asks, "Why would they go into those numbers if the world is going to come to an end this year? You could say a number that big at least suggests that time marches on."

Leaders among the Maya were keenly interested in astronomy and sought to coordinate sacred rituals with events in the heavens above. A chronicler of the heaven movements and time cycles would have been an honored member of the Maya court.

The wall in the chronicler's chamber was used in the same way a modern mathematician might use a whiteboard. The chronicler wrote his frequently consulted formulas on the wall of his chamber instead of having to look them up in a book. And— because these calendar details were inscribed on a wall—he preserved them better than any book would have. In fact, no books remain from the period when the chronicler wrote on his wall—researchers believe this wall dates to 800 AD.

In addition to the time data, there are pictures on the other walls in the chronicler's chamber, including an image of a king in a feather headdress, seated on a throne, with a white-garbed person peeking out from behind him (possibly a self-portrait of our chronicler). A painting of a scribe holding a stylus was on another wall.

According to the archaeologists, these paintings were the first Maya art to be found on the walls of a person's house.!

The chamber is a little larger than 6-feet square and is part of a larger complex in Mayan ruins of the rain forest at Xultun in northeastern Guatemala. Xultun is a large Early Classic Maya site. It is 24 miles northeast of the more famous Mayan site of Tikal. The site contains a pyramid that is 114 feet high, 2 ball courts, 24 stelae, and 5 reservoirs (aguadas). 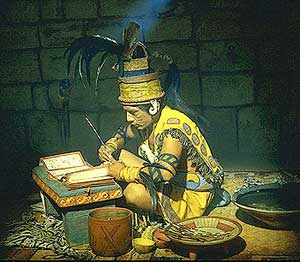 Anthony Aveni said the astronomical data on the wall would allow a chronicler to predict the appearance of a full moon years in advance and could be used to advise the king on when to go to war or how good this year's crops would be. "What you have here is astronomy driven by religion," Aveni said.

On an adjacent wall are numbers indicating four time spans from roughly 935 to 6,700 years. It's not clear what they represent, but maybe the chronicler was doing calculations that combined observations from important astronomical events like the movements of Mars, Venus, and the moon, the researchers said. Why bother to do that? Aveni suggest that perhaps the chronicler and his colleagues were "geeks ... who just got carried away with doing these kinds of computations and calculations, and probably did them far beyond the needs of ordinary society."

Simon Martin, co-curator of an exhibit about the Mayan calendar at the University of Pennsylvania Museum of Archaeology and Anthropology is very excited by this find: "It's really a wonderful surprise. We've never really been able to identify a working space, or how they actually went about things." The new work gives insight into how the Maya worked on their calculations, he said, and the fact that the room had a stone roof rather than thatching supports previous indications that the chronicler enjoyed a high social standing.

An undergraduate student working with Saturno's team in 2010 first glimpsed the chronicler's chamber. After first dismissing the value of a little piece of paint on a stone wall spotted by his student, Saturno later went back to the spot and dug deeper, finding the amazing timekeeper's chamber. To Saturno's amazement, the wall writings were of immeasurable value to the growing knowledge of the Maya and their fascination with the stars, planets, and the passage of time.

John Carlson, director of the Center for Archaeoastronomy in College Park, Md., said, "It's a very important discovery. We're only getting a glimpse of the story" in the published paper. Complete details and photos of the discovery will be published in the June issue of National Geographic, which funded some of this research.

John Van Auken, a director at the Association for Research and Enlightenment, is an acknowledged expert on the Cayce readings, the Bible, ancient prophecies, world religions, meditation, and ancient Egypt. John conducts seminars in the U.S. and abroad, and is a tour guide to the many sacred sites around the world with A.R.E. Travel. He is the author of numerous books, including Edgar Cayce and the Kabbalah, Ancient Egyptian Mysticism and From Karma to Grace. He will be presenting at several upcoming Virginia Beach Conferences including the Annual Ancient Mysteries Conference: Ancient Mysteries Conference—Digging for the Truth with Dr. Zahi Hawass from October 4-7, 2012.