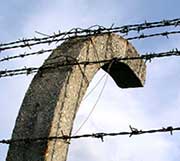 Mickey, an inmate serving a life sentence at a South Carolina maximum security prison, was going blind. The Department of Corrections had paid for one cataract operation, which now had clouded over. The other eye had its problems as well with a newly formed cataract of its own. Mickey was legally blind.

The warden said the state would not pay for further medical help. Mickey was working in the chaplain’s office and functioned in that capacity after the chaplain left each day. But, after nightfall, he could not see in the darkness. Those who needed help after dark were out of luck.

I was a volunteer chaplain at this prison. I wanted to help Mickey but I could not do it alone.

An Edgar Cayce Study Group that met weekly in my home became interested. We discussed what could be done. The warden was creating more obstacles than necessary. Why?

We set out to work through the obstacles we knew were standing in the way.

Word went out about Mickey’s need for surgery. Generous and caring people sent money toward the surgery. Money accumulated from people who wanted to see a blind inmate, who was doing remarkable work with other inmates, regain his sight. Individuals helped. When the Lions Club found out about Mickey, they helped too.

Hearts were opening for an inmate, who had made a mistake in the past and was now serving others.

We located an ophthalmologist who agreed to do the work. This respected surgeon did not shrink from having a beige uniformed prison inmate with a brown stripe down his pant leg in his reception room. Mickey was shy and didn’t want to appear in public wearing shackles and accompanied by two armed guards. The surgeon’s acceptance of Mickey helped. Mickey had to do what he had to do. Without the surgery, he could be of no service to others. The surgeon could render him functional again. That was his dream and ours.

We were about to witness a miracle that fanned out in more directions than we could have imagined.

I called the warden’s office. All the details had been worked out. The date for the medical pre-op appointment was made. The local police officers were ready.

Mickey watched the minutes of the wall clock tick toward 9 a.m. Any minute now the local police would arrive to take him to the appointment. He would be shackled, hand and foot. But Mickey could do it now, thanks to a magnanimous surgeon.

At 8:45 a.m. Mickey received devastating news. The warden ordered the operation stopped. Once again we coordinated a new time for the procedure. I again notified the warden’s office. But for a second time, the warden stopped the operation on the very day the appointment was set.

We were astounded. Why? It would take a miracle to help Mickey restore his sight.

From the grapevine we heard the reason. The warden was resolute. “No woman is going to tell me what to do.” He misunderstood our intentions. We were trying to help an inmate who could not help himself.

But we had overlooked the warden’s need. We looked at the situation. The warden was expressing his need to be respected. He had worked his way up through the ranks to the prison’s highest position. He needed to exert his authority. Although we thought we had checked with him all along the way, the focus had been on Mickey. Apparently the warden needed more. Now, what could we do to help?

The Warden was hurting.

Our Edgar Cayce group knew from the Cayce readings that prayer was beneficial. We formulated a 30-day prayer for our group to use at the meetings and for each member to use daily: “May the highest and best be done for the warden.” We each wanted the best for the warden.

In less than three weeks, something startling happened. Suddenly, the warden retired. He was leaving a system where he was unhappy. We rejoiced. He was getting what he wanted, and we were glad. If we could not help Mickey, we could help heal the warden’s wounds.

A new warden was in place. We contacted him to see if there would be any objection to our continuing our efforts to help Mickey.

“No, of course not,” came our answer.

Plans were formulated again. All went without a hitch.

When Mickey came from the operating room, he was staring at the wall, transfixed by the floral pattern he saw there. He had been unable to see details of any kind for months. He was captivated with the design on the wallpaper. To him the wallpaper’s simple floral pattern was exquisite.

So we lifted our grateful hearts. The loving Creator had healed wounds we did not know about. A hurting warden had been helped, and the way for corrective surgery for Mickey had been cleared.

Mickey’s miracle was all inclusive.

Barbara Derrick, PhD, a researcher, lecturer and writer on Edgar Cayce, is a counselor, family therapist, and mental health specialist who has successfully used a protocol suggested by Edgar Cayce to enhance and improve the lives of Alzheimer's patients. She has presented at the Edgar Cayce Health Symposium at Virginia Beach and her articles have appeared in Venture Inward magazine, available exclusively to Members by mail or online at EdgarCayce.org/members.