My Encounter with Cayce—
A Turning Point
By Mariangela Pino Landau

It was a windy January day in 1987 in Los Angeles, California and I awoke with an ache in the pit of my solar plexus. As I tuned into the ache, I got a crystal clear sense that I had grown sick and weary from concealing my true nature. I was born with the gift of psychic mediumship and channeling into an environment that could not nurture and support my true nature. I was cautioned to deny and disregard it to avoid being labeled "eccentric and delusional" or "possessed by the devil." I was repeatedly told that what I sensed, saw, and heard was the result of a combination of my vivid imagination and attention-seeking. My family and community's insistence that I accept being plain and normal temporarily triumphed over the song of my soul, and I acquiesced. 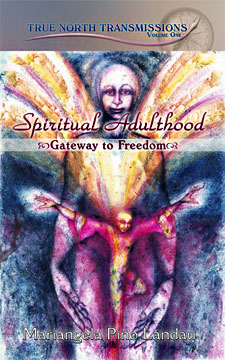 During the years of compliance, I suffered internally from the dis-ease of self-denial. Up until 1987, I soothed my soul ache by concentrating on hippie-inspired social activism, creative outlets, studying psychology, philosophy and the world's religions, and dabbling with various kinds of meditation.

On that January day in 1987, I reached a significant turning point. At around noon, a force came over me and compelled me to get in my car and drive. I had no idea where I was going. After about an hour, I found myself outside the Theosophical Society in Altadena, California. Inside was a library and bookstore to my right. I was greeted by an open-hearted, round-faced middle-aged woman who asked if she could help me. "I don't know," I replied, "I think I'll just look around." Within a few minutes I found myself in an aisle with books on either side of me, six shelves high. I began to feel a bit dizzy as if the energy from the books were reaching out to me. Since I didn't know what I was looking for, I just stood there nearly frozen until I noticed a footstool. I staggered to it, sat down and silently asked for help, saying "I don't know what to do; I need help, please guide me." Suddenly, a book tumbled to the floor from the fourth shelf. I reached down to find There Is a River by Thomas Sugrue. I cradled the book to my heart, sat, and started reading. Within minutes, I wept with relief and gratitude. This man—Edgar Cayce? "whose uncanny powers of clairvoyance provided him with miraculous insights that went far beyond the realm of reality–baffling doubters, astounding believers….and almost always proving correct" was now part of my life.

Edgar Cayce, a man of prophecy, insights into the soul, and cures he prescribed while in trance was with me. I wasn't alone anymore. I stood up to see where the book had fallen from and discovered The Sleeping Prophet by Jess Stearn, included it in my embrace, and swiftly went to the cashier.

As I delved into his work, I found terms such as "akashic records," "soul mates," and "holism," and instantly knew I needed to find out more. And so began my more formal spiritual training starting with Unity Church, followed by the Church of Religious Science, and a myriad of spiritual, new age, and metaphysical books and holistic healing modalities. I could not satiate my voracious appetite. What I found most remarkable was that Edgar Cayce had constructed a foundation upon which so many have stood since. He had brought nearly all of the terms and concepts I read in other literary offerings to this realm years before it was even considered acceptable.

In 1997, I came out of the closet as a psychic medium and channeler, largely due to the helping hand of Edgar Cayce. Although I remain today one of the millions who have been touched by the life and work of a stunning farm boy who is the most resourceful, reliable, and trustworthy psychic in history, I think of Edgar Cayce with grateful fondness as the man who guided me home.

Mariangela Pino Landau is the founder of The Center for True North, an organization fostering personal authenticity and spiritual freedom. She is a psychic medium, mystic, metaphysical minister, ritual and ceremonial facilitator, poet, and author. She can be reached by eMail at Mariangela@thecenterfortruenorth.com or via her website www.TheCenterforTrueNorth.com. Mariangela's new book True North Transmissions®, Volume One: Spiritual Adulthood—Gateway to Freedom is available for a limited time as a free download in the Member-Only section of our Website at EdgarCayce.org/members.