Join
My Journey of Purpose With Edgar Cayce
Leslie Juvin-Acker

A Complete Education With Edgar Cayce

I was 16 in 2001 when I first heard the name of Edgar Cayce. My marine biology teacher, Mrs. Loehr, passionately taught us about the story of Atlantis as a way of compelling our imaginations on the different biological occurrences beneath the ocean’s surface. She said that Edgar Cayce spoke of this mythical land during hypnotic trances. And how, through selfish attitudes, the people of Atlantis brought about their own destruction. From that day on, I was hooked.

Fast forward to my university days starting in 2003. I was studying international affairs and comparative politics with a minor in sociology. I studied every kind of philosophy imaginable, trying to make sense of the post 9-11 world. During my own study time, I referred back to Edgar Cayce and his readings about soul groups, ideals, and purpose. Not to mention, individual consciousness and group consciousness. The readings gave me a sense of completion to my studies and a holistic understanding of power politics and international economics. Without Cayce, my formal university education would be simply incomplete.

When I lived in France, my brother Lou was obsessed with ancient astronaut theory. He asked me to read Erich Von Daniken’s Chariots of The Gods so that we could discuss the content together. Reviewing these theories, I realized that I had heard about them before from Edgar Cayce. And, once again, I circled back to the readings for a more complete understanding about the origin of humanity and its ultimate purpose in life. At this time, Cayce’s readings about the human spirit’s “fall” into materiality, Arcturus, and man’s evolution back to her Creator played center stage in my life.

Awakening Out Of Depression & Anxiety

Then, in 2012, depression and anxiety hit me hard after the birth of my first child. In the darkest, most isolating moments, I turned to the Edgar Cayce readings about treating depression and anxiety. I learned about the acid/alkaline balance which helped me release over 35 pounds of pregnancy weight. With the advice found in the readings, I found my ideals, practiced loving intention, and employed the law of attraction to re-create a new, healthy life for myself.  Thanks to the readings, I turned a scary time in my life into an empowering, life-affirming one.

The depression and anxiety revealed my undeniable psychic abilities. These abilities were expressed all throughout my youth as personal, subjective experiences. I had always seen auras. I had dreams of past lives. I saw the large feet of an angel passing by while hiding under the bed, watching the door as my parents fought. I knew without a doubt at fifteen that I had to learn French because I was to marry a Frenchman and live in France (which actually happened eight years later). But then, Spirit was moving in a way in which my subjective experience became a compulsion to share important, healing messages to my friends and strangers.

A psychic told me during that time I was going to move to California and read celebrities. She said I would write books and build an entire career around these healing abilities. I honestly didn’t believe her. However, the Creative Forces were so strong in my life that they were unquestionable and my only guide through this life-altering transformation was Edgar Cayce's readings and books published by the A.R.E.. Without them, I would have been lost in a sea of confusion.

I did eventually move back to California in 2014. However, I wasn’t professionally using my psychic abilities at that time. I was so embarrassed by them that I hid them. After a period of anxiety and a serious panic attack, I went to a psychiatrist. I told her about all of my experiences, wondering if I was psychotic. I told her about the energy of her father that I saw shimmering over her shoulder and explained that he approved of her marrying the man she was with. She was awestruck and told me that she was considering marrying her boyfriend. She told me that I wasn’t psychotic, but had a talent worth exploring.

From there, I went on a journey learning healing techniques: energy reading, hypnotherapy, EFT, Reiki, sound healing, crystals, and aroma-acupressure. At every single stage, Edgar Cayce’s readings and the A.R.E.’s books went with me and guided my next steps. My career coaching practice evolved into a holistic life coaching and healing practice. I read past lives, present potential, do health readings, and apply energy healing techniques within a coaching structure.  And, yes, I went on to read actors, celebrities, famous athletes, and their families.

Through the entire process, I have grown in every conceivable way. Edgar Cayce has been a spiritual father-figure to me. And, everyone at the A.R.E. my brothers and sisters in an important mission to elevate the consciousness of humanity. Today, I apply the principles taught in the readings in every aspect of my life as a mother, wife, professional, and friend. I teach my clients all over the world about Cayce, the readings, and the A.R.E.. Every day, I read Venture Inward, visit the A.R.E. online reading records, and reference A.R.E. printed materials and videos.  In a long, curious way, I evolved into a Cayce evangelist and didn’t even know it.

Thanks to Edgar Cayce and the A.R.E. I have found and realized my life purpose. It was a seventeen year journey that awakened me to love, faith, compassion, and empathy. I wasn’t on a conscious journey to be the way I am. Rather, I was gifted with grace to become aware of my own nature and to express it fully. And, fortunately, I know there are others like me who have been saved and empowered by the Cayce readings at various critical junctures in their lives.

I am so grateful for Mrs. Loehr for having introduced me to Edgar Cayce that fateful semester of marine biology class. Every time I tell someone about Cayce, the readings, the Creative Forces, and the A.R.E. I get to relive that feeling of enlightenment for the first time all over again. And, I know, for sure, that when these moments come, it’s because it was simply meant to be. For, in the words of Cayce himself,

When ye are prepared for a thing, the opportunity to use it presents itself.

Leslie Juvin-Acker is a prolific reader and writer since an early age. Naturally gifted, Leslie is an automatic writer and can write over 25,000 words in a single day. She has been writing stories, blog posts, news articles, and books for over two decades.

Leslie has won awards and state recognition for her essays and speech writing. An avid blogger, she also wrote original news articles for AllHeadlineNews online press service. From 2014-2017, Leslie contributed career and leadership advice articles as Malakye.com‘s expert contributor, with more than 100,000 readers.

A self-help author and expert on the subjects of career, spirituality, and emotional intelligence, Leslie educates her readers while taking them on a journey of self-exploration. Learn more at Leslieinc.org.

See all by Leslie Juvin-Acker 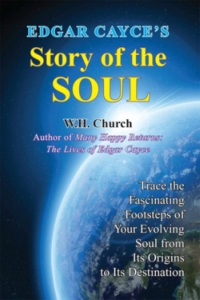 Walk along with me on our soul group’s journey. Join me in recommitting to the Cayce Work. Download John's letter.

The Healing Power of Spiritual Gardening

What is hypnosis? What is Regression?