Last year at this time (October, 2015), a research team named ScanPyramids launched a mission under the authority of the Egyptian Ministry of Antiquities. The team’s mission was initiated, designed, and coordinated by the Faculty of Engineering of Cairo and the French HIP Institute (Heritage, Innovation and Preservation). Researchers of three major international universities: the Faculty of Engineering of Cairo University, Université Laval of Quebec, and Nagoya University of Japan are probing the heart of the largest pyramids in Egypt without drilling. They are using a combination of thermography, 3D simulation, and muon radiography imaging.

ScanPyramids has discovered two anomalies in the mammoth stone structure of the only remaining wonder of the ancient 7 Wonders of the World, the Great Pyramid of Giza. These anomalies indicate the presence of open spaces beyond the stone surface.

The first possible opening is on the northeast side of the monument near the corner: 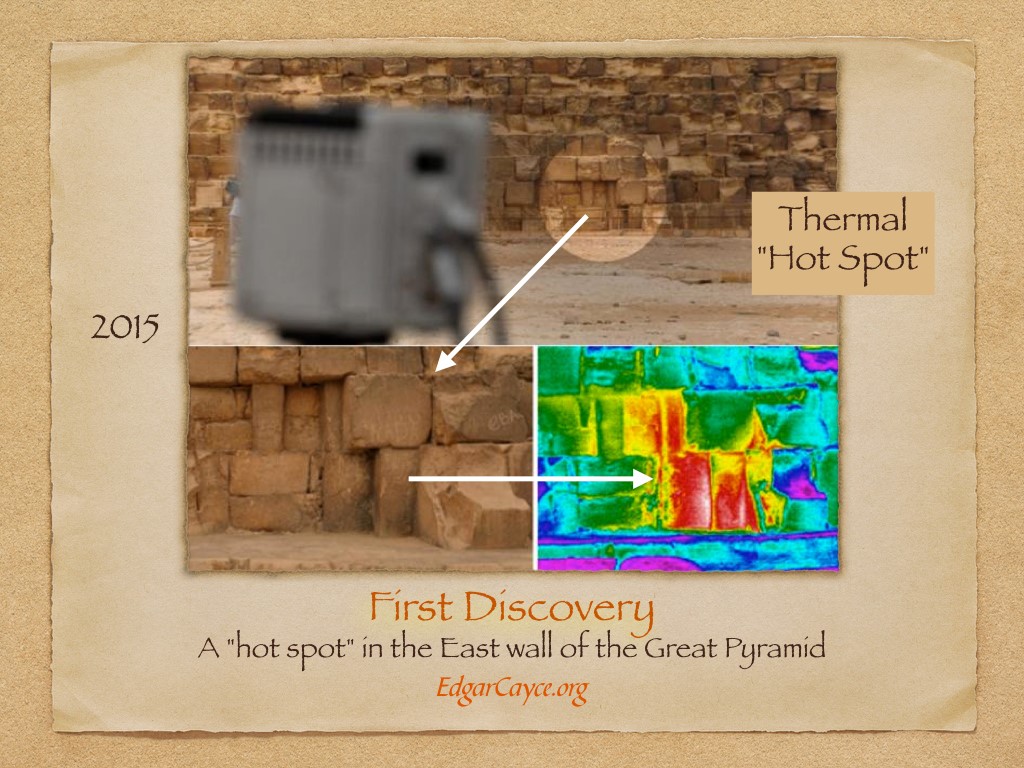 The second of these open spaces is just behind the north face of the pyramid and above the original entrance: 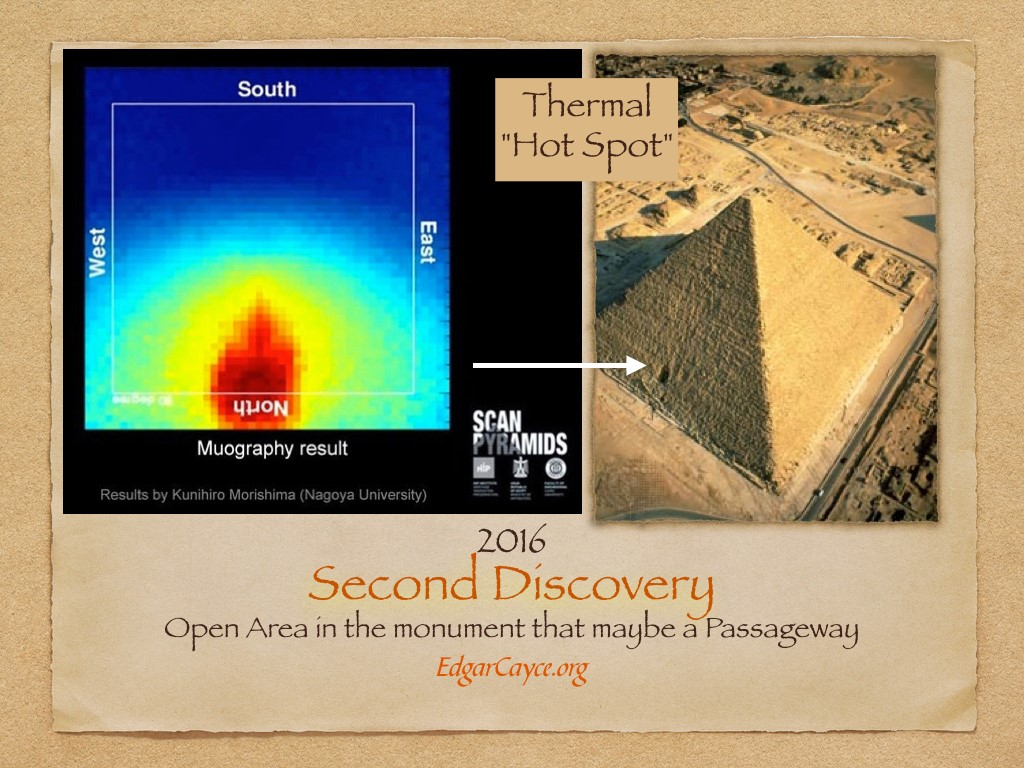 This opening may be an undiscovered passageway inside the pyramid. The Egyptian Antiquities Ministry has created an oversight team led by Dr. Zahi Hawass with other top Egyptologists, including Dr. Mark Lehner, a friend of the Edgar Cayce family. ScanPyramids’ contract was to end this year, 2016, but has now been extended because of the discoveries.

Why are these discoveries so important?

The Edgar Cayce’s readings explain that the chambers and passageways inside the Great Pyramid reveal periods through which the world has and is passing as related to the spiritual experiences of humanity! (5748-5) Therefore, new chambers reveal new experiences – and we certainly want to be aware of these.

Adding to these discoveries is the 2015 discovery of chambers beyond the walls of King Tut’s tomb! King Tut may have been buried in his little tomb quickly because he died so young (19), and his tomb may be in the front section of Nefertiti’s tomb! And if we thought Tut’s treasure was amazing, Nefertiti’s is likely to be spectacular! Inside Tut’s little tomb the walls do not appear to be solid because modern equipment has found “anomalies” behind them. These anomalies may be open spaces, may be chambers in the tomb of his mother (possibly step-mother) Queen Nefertiti. (To learn more, read my blog article at Edgarcayce.org/about-us/blog/blog-posts/two-secret-rooms-discovered-in-king-tuts-tomb).

As Dr. Hawass has said many times, there is more undiscovered in Egypt than has been discovered! Fortunately, exploration continues despite world troubles. Keep in touch for further updates!