Preparation for Jesus (Part 1)
From the Edgar Cayce Readings

The story of the preparation for the birth of Jesus as told in the Edgar Cayce Readings provides some amazing details to the life of Mary and Joseph and their selection as the parents of Jesus. Edgar Cayce spoke about the Essenes, a spiritual community whose presence has since been confirmed by the Dead Sea Scrolls discovered after Mr. Cayce’s death. Here are some excerpts about the training and selection of Mary:

Q) Please describe the associate membership of the women in the Essene brotherhood, telling what privileges and restrictions they had, how they joined the Order, and what their life and work was.
A) This was the beginning of the period where women were considered as equals with the men in their activities, in their abilities to formulate, to live, to be, channels.

They joined by dedication—usually by their parents.

It was a free will thing all the way thorough, but they were restricted only in the matter of certain foods and certain associations in various periods—which referred to the sex, as well as to the food or drink.

Q) How did Mary and Joseph first come in contact with the Essenes and what was their preparation for the coming of Jesus?
A) As indicated, by being dedicated by their parents.

(Q) Please describe the process of selection and training of those set aside as holy women such as Mary, Editha [587], and others as a possible mother for the Christ. How were they chosen, were they mated, and what was their life and work while they waited in the Temple?
A) They were first dedicated and then there was the choice of the individual through the growths, as to whether they would be merely channels for general services. For, these were chosen for special services at various times; as were the twelve chosen at the time, which may be used as an illustration. Remember, these came down from the periods when the school had begun, you see.

Hence the group we refer to here as the Essenes, which was the outgrowth of the periods of preparations from the teachings by Melchizedek, as propagated by Elijah and Ilisha and Samuel. These were set aside for preserving themselves in direct line of choice for the offering of themselves as channels through which there might come the new or the divine origin, see?

Their life and work during such periods of preparation were given to alms, good deeds, missionary activities—as would be termed today…
(Edgar Cayce Reading 254-109) 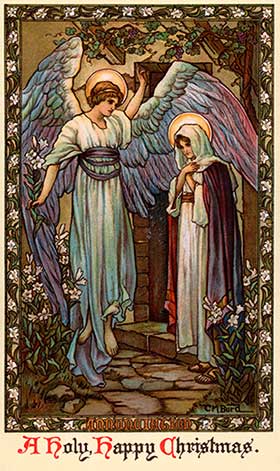 On this day, as they mounted the steps all were bathed in the morning sun; which not only made a beautiful picture but clothed all as in purple and gold.

As Mary reached the top step, then, then there were the thunder and lightning, and the angel led the way, taking the child by the hand before the altar. This was the manner of choice, this was the showing of the way; for she led the others on this particular day.

Q) Was this the orthodox Jewish temple or the Essene temple?
A) The Essenes, to be sure…

Q) How old was Mary at the time she was chosen?
A) Four; and, as ye would call, between twelve and thirteen when designated as the one chosen by the angel on the stair.

Q) Describe the training and preparation of the group of maidens.
A) Trained as to physical exercise first, trained as to mental exercises as related to chastity, purity, love, patience, endurance. All of these by what would be termed by many in the present as persecutions, but as tests for physical and mental strength; and this under the supervision of those that cared for the nourishments by the protection in the food values. These were the manners and the way they were trained, directed, protected.

Q) Were they put on special diet? A) No wine, no fermented drink ever given. Special foods, yes. These were kept balanced according to that which had been first set by Aran [Aaron? See Leviticus 10:9 and 11:1--47] and Ra Ta.
(Edgar Cayce Reading 5749-8)

Excerpts from the Edgar Cayce Readings. A.R.E. Members have access to a searchable database of all readings online at EdgarCayce.org/members. To learn more about membership, visit EdgarCayce.org/join.