Preparation for Jesus (Part 2)
From the Edgar Cayce Readings

The story of the preparation for the birth of Jesus as told in the Edgar Cayce Readings provides some amazing details to the life of Mary and Joseph and their selection as the parents of Jesus. Edgar Cayce spoke about the Essenes, a spiritual community whose presence has since been confirmed by the Dead Sea Scrolls discovered after Mr. Cayce’s death. Here are some excerpts about the marriage of Mary and Joseph:

Q) In what manner was Joseph informed of his part in the birth of Jesus?
A) First by Mathias or Judah. Then as this did not coincide with his own feelings, first in a dream and then the direct voice.

And whenever the voice, this always is accompanied with odors as well as lights; and oft the description of the lights is the vision, see?


Q) Why was he disturbed when Mary became with child while yet a virgin?
A) Owing to his natural surroundings and because of his advanced age to that of the virgin when she was given; or as would be termed in the present, because of what people say. Yet when assured, you see, that this was the divine, not only by his brethren but by the voice and by those experiences, he knew. For you see there was from the time of the first promise, while she was still yet in training from the choice, there was a period of some three to four years; yet when he went to claim her as the bride, at the period of—or between sixteen and seventeen, she was found with child.


Q) How old was Joseph at the time of the marriage?
A) Thirty-six.


Q) How old was Mary at the time of the marriage?
A) Sixteen…


Q) Where was the wedding performed? of Mary and Joseph?
A) In the temple there at Carmel. 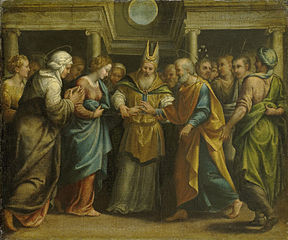 Q) Please describe the Essene wedding, in temple, of Mary and Joseph, giving the form of ceremony and customs at that time.
A) This followed very closely the form outlined in Ruth. It was not in any way a supplanting but a cherishing of the sincerity of purpose in the activities of individuals.

When there was to be the association, or the wedding of Joseph and Mary—Mary having been chosen as the channel by the activities indicated upon the stair, by the hovering of the angel, the enunciation to Anna and to Judy [1472] and to the rest of those in charge of the preparations at that time—then there was to be sought out the nearer of kin, though not kin in the blood relationships. Thus the lot fell upon Joseph, though he was a much older man compared to the age ordinarily attributed to Mary in the period. Thus there followed the regular ritual in the temple. For, remember, the Jews were not refrained from following their rituals. Those of the other groups, as the Egyptians or the Parthians, were not refrained from following the customs to which they had been trained; which were not carried on in the Jewish temple but rather in the general meeting place of the Essenes as a body-organization.


Q) Where did the couple live during the pregnancy?
A) Mary spent the most of the time in the hills of Judea, portion of the time with Joseph in Nazareth. From there they went to Bethlehem to be taxed, or to register—as ye would term…


Q) Do we celebrate Christmas at approximately the right time?
A) Not a great variation, for there having been the many changes in the accounting of time, or accounting for the periods from the various times when time is counted—not far wrong—twenty-fourth, twenty-fifth of December, as ye have your time now.

Excerpts from the Edgar Cayce Readings. A.R.E. Members have access to a searchable database of all readings online at EdgarCayce.org/members. To learn more about membership, visit EdgarCayce.org/join.

We wish you a very Happy New Year.