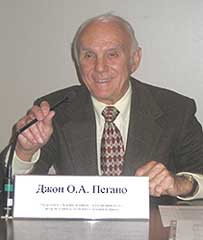 John O. A. Pagano, DC, a 50-year member of the A.R.E. and psoriasis researcher for over 40 years, gave a presentation on treating psoriasis before the Russian Academy of Science in Moscow in October, 2009. The entire two-day conference was focused on both traditional and non-traditional methods of treating this often-devastating skin condition, which afflicts an estimated three to four percent of the Russian population (about double the rate in the United States).

The roster of speakers at the conference included many notable figures in the Russian health field, Pagano said. “They were a pretty tough act to follow,” he added. “But it did not deter me, because I had something to offer that they lacked. It was a new, natural approach to the disease with undeniable proof of its effectiveness.”

Day one of the conference was presented to health professionals, scientists, and the press. While the majority of the speakers discussed the latest pharmaceutical approaches and medical trends for treatment of psoriasis, Pagano laid out his program, which uses no drugs. He added that his approach is not meant to be a replacement for medicine, but rather an alternative if more traditional methods are ineffective.

Pagano’s program is based on his “three Ds” – diet, detoxification, and determination. He described the importance of a high-alkaline, low-acidic diet, herb teas, massage with certain oils, detoxification procedures, spinal adjustments that activate the immune system, proper eliminations, and healthful attitudes. He also stressed that time and patience are essential elements for success, along with the patient’s willingness to take responsibility for their own recovery. He said, “If a patient practiced the three Ds, it is possible that he can rid himself of every lesion, rash, and disfigurement to the point that he would never know he ever had it!

This statement “sent shockwaves through the audience,” he added. “They never heard of such a concept before. But this time, it was not only words that were thrown at them; I had the proof!” Pagano’s patient, Katya Varlamova, 26, accompanied him to the conference as his “proof” and interpreter. She had suffered from a severe case of psoriatic arthritis for 12 years, but “had been healed after following the regimen faithfully for six months.” She followed Pagano’s presentation by sharing her story of transformation from psoriasis covering 80 percent of her body to being completely blemish-free.

In his talk, Pagano made it clear that the inspiration for his more than 40 years of work in this field was the Edgar Cayce readings. In a 1942 reading, when asked if there was an absolute cure for psoriasis, Cayce replied, “Most of this is found in diet. There is a cure. It requires patience and persistence – and right thinking also.” (2455-2) Pagano combined this and other information found in the readings with his own observations to form the Cayce-Pagano diet. “It seemed to be my life’s purpose to prove the truth of that statement,” he said.

For additional details, see the Jan/Feb/Mar 2010 issue of Venture Inward magazine, available in the member-only section.

John O. A. Pagano, DC, is the author of Healing Psoriasis: The Natural Alternative. His latest book is One Cause, Many Ailments: The Leaky Gut Syndrome (A.R.E. Press), available at ARECatalog.com or 800- 333-4499.