Reading 5749-6 given by Edgar Cayce on April 5, 1936 offers questions and answers as to the miracle of Easter still on our hearts today. Gertrude Cayce began the reading by giving the “sleeping” Edgar Cayce a suggestion, “As we approach this Easter season our thoughts turn naturally toward the biblical accounts of the resurrection of Jesus, the Christ. We seek…[an] interpretation and explanation of the full meaning of the resurrection which will help us to better understand and appreciate it.”

From his trance state, Mr. Cayce responded with words of hope and encouragement for people of all religious backgrounds and faiths. “Yes. In seeking ye shall find. In the experience of each soul that has named the name of the Christ, this should be a season of rededication of self as being a true messenger…among men.”

He went on to remind those gathered with him of the sacrifice and resurrection as a demonstration of the law and a fulfillment of God’s promise to man. Mr. Cayce’s words express it best: 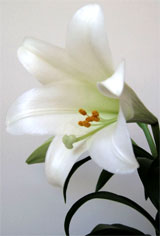 Else why did He put on flesh and come into the earth in the form of man, but to be one with the Father; to show to man his (man's) divinity, man's relationship to the Maker; to show man that indeed the Father meant it when He said, "If ye call I will hear. Even though ye be far away, even though ye be covered with sin…”

Though man be far afield, then, though he may have erred, there is established that which makes for a closer, closer walk with Him, through that one who experienced all those turmoils, strifes, desires, urges that may be the lot of man in the earth. Yet He put on flesh, made Himself as naught—even as was promised throughout, to those who walked and talked with God…”

And then as He hung upon the Cross, He called to those that He loved and remembered not only their spiritual purposes but their material lives. For He indeed in suffering the death on the Cross became the whole, the entire way; the way, the life, the understanding, that we who believe on Him may, too, have the everlasting life. For He committed unto those of His brethren not only the care of the spiritual life of the world but the material life of those that were of His own flesh, His own blood. Yea, as He gave his physical blood that doubt and fear might be banished, so He overcame death; not only in the physical body but in the spirit body—that it may become as ONE with Him, even as on that resurrection morn—that ye call thy Eastertide.

Hence when those of His loved ones and those of His brethren came on that glad morning when the tidings had come to them, those that stood guard heard a fearful noise and saw a light, and—“the stone has been rolled away!" Then they entered into the garden, and there Mary first saw her risen Lord. Then came they of His brethren with the faithful women, those that loved His mother, those that were her companions in sorrow, those that were making preparations that the law might be kept that even there might be no desecration of the ground about His tomb. They, too, of His friends, His loved ones, His brethren, saw the angels.