In 2009, the A.R.E. unveiled a series of building and renovation projects and technological innovations to bring their facilities into the 21st Century. As part of the organization’s C.R.E.A.T.E. campaign, these projects total more than $5 million and have been underwritten by contributions of A.R.E. members throughout the world.

First, there were renovations to the smallest building on the property known as the Gibbon’s House. This facility is used to house the Spa Wellness weeks, where individuals receive spa treatments, massage, chiropractic services, and dietary guidance for a week at a time. Then came technological innovations to the center’s conference facilities, creating the capability of live-stream programming. 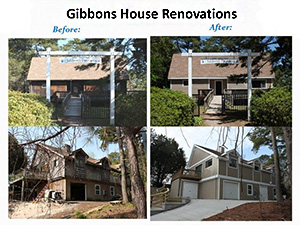 Next came the creation of the deLaski Family Foundation Education Center, which houses two of the organization’s schools: Atlantic University, offering a master’s degree program in Transpersonal Studies, and the Cayce/Reilly School of Massage, offering a 700-hour program in massage therapy. Located in that new buildings ground floor is the Edgar Cayce Foundation, which houses the organization’s archives, collected since before the original founding date of 1931.

The project now underway is the renovation of the Edgar Cayce Hospital building (built in 1928), which houses organizational offices and the popular A.R.E. Health Center & Spa. Renovations will include the installation of an elevator (for the first time in the building’s history!), new siding, a new sweeping stairway in the style of the original hospital, upgrades to the Spa, and the creation of the Cayce/Miller Café and Copeland Dining Room on the first floor. The project is on schedule to be completed by June 2014.

According to CEO Kevin Todeschi, “At first this entire project seemed like an impossible dream, but it has all been made possible through the dedication of our donors and members throughout the world. I think Edgar Cayce himself would be very pleased with the results.”

Long in need of renovations, the historic hospital building will be remodeled to look like the original hospital building and the recently built education center. When the historic building was first constructed—for the then staggering sum of almost $200,000 (including state-of-the-art hospital equipment), the hospital employed doctors, nurses, osteopaths, and physiotherapists who carried out treatments recommended by Edgar Cayce’s psychic readings. In fact, for many individuals the hospital was seen as their last ray of hope. Although he drew upon the wisdom of every school of medicine, Cayce would come to be called “the father of holistic medicine.”

More information about this project is available at EdgarCayce.org/create.