I am a member of an "A Search for God" Study Group in Snydersville, Pa. We were interested in synchronicity and decided to study Mark Thurston's book on the subject. We ordered a dozen copies and dove right in. Mark's explanations are quite clear and our members began to bring in examples of their own experiences each week.

We meet every Tuesday night at a local center, and our lively group consists of young as well as older members. We all became more and more aware of the things happening around us every day and began to share our synchronistic stories.

Two sisters reported missing their exit off the interstate on their way home and having to get off at the next exit and work their way back on the side roads. Suddenly in the headlights appeared one of their cats, and they stopped to pick her up. At the next meeting we discussed the fact that what seemed like a simple mistake of missing an exit led to the discovery of the straying cat, and without that mistake the cat might not have been found.

Most of the group had no experience using the I Ching, and we began to ask questions and read the results of the coin oracle given in the book. It surprised the group how useful the answers seemed to be. I asked the first question about what direction I should take with the work I was presently preparing. The answer warned me not to push forward but instead to pay attention to others' needs in order to allow time for things to come about in a natural way. It suggested I look at problems as opportunities and show patience. It has proved to be a good answer. We next asked about the coming changes foretold by so many, and were told that we should expect an increase in burdens and strong pressure from the outside but we were also cautioned against becoming pessimistic or allowing negative thinking to slow our progress into the next phase of our lives.

Some of the group asked questions about family members who were not in the best of health, and one of our members asked about the prospects for a new business he was intending to start. They all confirmed that the answers were useful.

Then the question arose of what our group should be doing to help others in our community. We were told to become lights in our community by spreading positive energies. For our group to grow, we were to look outside ourselves and see our role in the greater order.

We were a little shaken by the demands this seemed to place on us and asked ourselves whether we felt strong enough to start along that path, which seemed to be rather large and not a little frightening.

The Cayce readings came to the rescue as we remembered statements like: "As ye apply ye are given the next step." And "What ye find to do, with willing hands do ye."

We have always had fun sharing interesting sayings with each other via email and in person. So we thought we might be able to include others in the fun. The discussion led to the idea of introducing synchronicities by scattering our little sayings in such a way that people would be caught by surprise and stop for a moment to consider the wisdom of some of our favorite aphorisms. 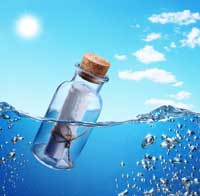 Someone mentioned scattering thoughts about and there it was—let's call them "Scatter Thoughts." We could have these sayings printed on little slips of paper and scatter them everywhere. Leave them in the condiment tray at the diner, on supermarket shelves, in banks and filling stations. One of our ingenious members stuffed one into the pocket of each coat hung on the coat rack at her doctor's office.

As a nod to Sacred Geometry we decided to have them printed on slips of paper whose length and width is in the proportion of the Golden Mean.

We agreed we should remain anonymous and not to take credit for the Scatter Thoughts so that the mystery might coax a little more attention to the thoughts from the recipients. "Hmmm! Where did this come from?"

Here are a couple of examples of the slips we are distributing:

It is not what you gather, but what you scatter that tells what kind of life you have lived.
brought to you by SCATTER THOUGHTS

You are precisely as large as what you love and as small as what you allow to annoy you.
-Robert Anton Wilson
brought to you by SCATTER THOUGHTS

We are experiencing so much joy from this idea that I thought it might be appropriate to pass it on to other groups. Anyone can reach our group through me: Rev. Charles T. "Skip" Weatherford at Tamuz@aol.com.

Consult the I-Ching, an ancient Chinese text widely used for divination. Our version compares the traditional wisdom to the teaching of Edgar Cayce. The text of the 64 hexagrams was adapted from the book, Synchronicity as Spiritual Guidance, by Mark Thurston, PhD.