Snow in Egypt?
By Alison Ray

For the first time in more than 100 years (more precisely 112 years) people from all nations saw the images of snow falling on Cairo, Egypt and even the Giza plateau. Given its desert climate, any precipitation in Cairo is rare; the city averages less than an inch of rain per year and warm, the average temperature in Cairo in December is nearly 60 degrees Fahrenheit. However, there were images of Cairo blanketed in snow, pictures of camels curled up in the snow, even images of the pyramids with a light dusting of snow. The photo of the pyramids, which was shared by tens of thousands of social-networkers has since been deemed a ‘fake’ but the outlines of the majestic pyramids seeming to glow with a bright white hue caused me to wonder if that was how they looked when they were first built. 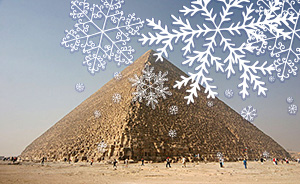 While traditional archaeology suggests that the Great Pyramid was built around 2500 B.C. under the Pharaoh Khufu (Cheops) who ruled from 2551-2528 B.C., according to the Cayce readings, the pyramids are much older. The Great Pyramid was constructed between 10,490 and 10,390 B.C. by the efforts of an earlier incarnation of Edgar Cayce as the high priest Ra Ta and the efforts of the native Egyptians and the Atlanteans. For all things old are not primitive, in fact, the readings indicate that this was a spiritually and technologically advanced society that created temples for teaching the ‘Law of One.’ In addition, there were centers of learning called Temple Beautiful much like universities for teaching of vocations, meditation, and universal laws. There was also the Temple of Sacrifice much like a hospital and spa for physical and mental purification and rejuvenation. There were emissaries sent around the world to share the teaching and ideals.

It was the building of the Great Pyramid that unified the people with “what may be truly termed the first national or nation spirit of a peoples…” (Edgar Cayce reading 195-151) “Hence there began the first preparation for what has later become that called The Great Pyramid, that was to be the presentation of that which had been gained by these peoples through the activities of Ra-Ta…” (195-151) The Great Pyramid was built for the preservation of their understanding “not only for those in the present but for the generations that were to come…” (Edgar Cayce reading 294-151)

The Great Pyramid was built by Ra Ta working with Hermes as the construction architect and Ra Ta’s wife, Isris, for counsel and advice. “Then began the laying out of the pyramid and the building of same…” (294-151) It was designed based on “the position of the various stars, that acted in the place about which this particular solar system circles…” (Edgar Cayce reading 294-151) The Great Pyramids was “to be the place of initiation of the initiates that were to act in the capacity of leaders in the various activities…” (294-151)

Reading 5748-6 explains how the pyramid was built:

(Q) How was this particular Great Pyramid of Gizeh built?
(A) By the use of those forces in nature as make for iron to swim. Stone floats in the air in the same manner. This will be discovered in '58.

While the readings did not predict snow in Egypt, they did suggest that one day we may again become unified as one people and that one day the Hall of Records will provide “proof of the information may be found…for physically there are evidences of the activity of mental man in archaeological works, see?” (Edgar Cayce reading 254-47)

Alison Ray works as marketing manager for Edgar Cayce’s A.R.E. where she is responsible for membership, public information, Venture Inward, and the Web. Before moving from Chicago to Virginia Beach, she was the Assistant Vice President of Discover Home Loans, a private label mortgage program under Morgan Stanley, offering home equity loans to Discover Card members. A long-time Egypt enthusiast, she regularly practices meditation and Tai Chi, and makes jewelry.