Join
Something Is Wrong with Our Past
Erich von Däniken

Something is wrong with our past. There exist structures that could not have been created by technologically-untrained Stone Age peoples. There are global petroglyphs and religious rituals that are all related to each other. There are writings of ancient historians reporting on cultures and data about which the official archaeology field wants to know nothing. Here are some examples:

Around 300 BC, the priest and historian Manetho lived in Egypt. He is the author of a three-volume "Chronicle" that is lost except for a few bits and pieces. Thankfully, other historians took over major parts of the Chronicle 2000 years ago. Among these were Flavius Josephus, Sextus Julius Africanus, and in particular Bishop Eusebius, who was the Bishop of Caesarea in the year 315 AD. Eusebius quoted extensively from Manetho's Chronicle in his works.

At the beginning, "Children of God" ruled over Egypt. The first was called Menes of Thynite. This is followed by names like Hephaestus who brought fire, Chronos, Tiphon, Osiris, Horus, etc. Then, Bishop Eusebius shares—noting a reference from Manetho—that the first dynasties ruled a total of two myriads and 4900 years. He notes that he thinks in lunar years.

In solar years though, this totals 24,925 years, which is impossible according to archaeological research. But similarly impossible figures are offered by the ancient historian Diodorus of Sicily. He writes: "From Osiris and Isis until Alexander's reign, more than 10,000 years have passed, but as some write, only slightly less than 23,000 years." Even the father of history, the Greek Herodotus, who visited Egypt around 2500 years ago, noted: "In Menes, Priests read to me from a book and named 330 Kings." Herodotus holds in his second book of Histories that gods existed on earth 11,340 years prior, before vanishing mysteriously. When we count the years from Herodotus to the present date, any gods would have been on Earth around 14,000 years ago.

On the list of Sumerian Kings, an engraved stone block that can be marvelled at the British Museum in London, ten primordial kings ruled from the creation of the world until the great flood. They ruled a total 456,000 years. After the flood, "the monarchy came down again from heaven." The 23 kings who ruled after the flood did so for a combined reign of 24,510 years, three months, and three and a half days. Lunar years are not feasible for this timeframe because the months are listed separately.

Around 700 BC, the Greek Hesiod wrote his myth of the five human races. Originally, so he writes, the immortal gods—Chronos and his comrades—created humanity. "Those heroes of sublime sex we called demi-gods, who inhabited the infinite Earth in the time ahead of us." There's hardly an ancient culture on Earth without a grotesque numbers of events about which our historical science knows nothing. In the fourth chapter of the Buddhist work Antara Nikaya, a "Kali-Yuga" takes 432,000 years, a "Deva-Yuga" 288,000 years, a "Treta-Yuga" 216 000 years, etc. The Holy Book of the Tibetans, the Kanjur, provides similarly massive figures. In the collection of Six Votes (Chapter Divine Voice), the Kanjur describes 50 Earth years in outer space as a single day and night. One life in space is 500 years, or—converted into Earth years—nine million years ago. So it goes in many cultures, including the Maya in Central America. On a tablet in Temple XIV of Palenque, the god Bolon Yokte first surfaced around July 29, 931,449 BC. Finally, inscriptions on the third panel in the Temple of Palenque list a date from 1,274,654 years ago which appears in connection to the boy King Pacal.

We are prisoners within our system of thought. The umbilical cord is always the evolutionary process—for we seem tethered to grandiose notions of the past. Darwin's Theory of Evolution is the credo of anthropology. In scientific circles, it is sacrilegious to not believe it. Any doubters of Darwin's theory are considered ignorant bores that cannot be taken seriously. Hardly a year passes without a press conference revealing an even newer find in relation to human origins, and the respective fossil is the latest precursor to humanity—until the next latest discovery.

Three conditions form the basis of all research: 1. freedom of thought. 2. the gift of observation. 3. the sense of relationships. I would add a fourth requirement: overcoming the spirit of the times, the Zeitgeist. 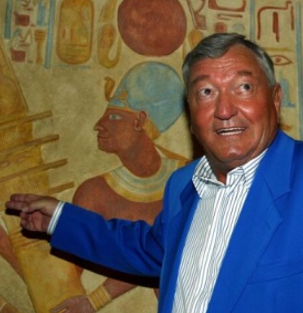 Erich von Däniken is one of the most widely read non-fiction authors in the world. His works have been translated into 28 languages and have sold more than 63 million copies. Several have also been made into films, including the Emmy-nominated In Search of Ancient Astronauts. He is a featured presenter on History Channel's Ancient Aliens series. He is celebrating the 50th Anniversary of Chariots of the Gods Chronicles in London, England on October 15, 2016 with a live-streamed webcast event (ZoharStargate.com).

See all by Erich von Däniken