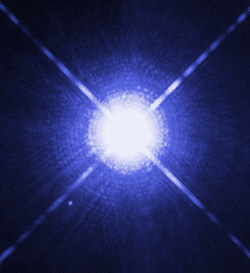 Science tells us that what goes up must come down, a law enunciated by Isaac Newton. Religion informs us of the corollary that what goes down must also rise again, an insight expounded in countless myths of death and rebirth, but which probably originated from simple observations of the stars and other rhythms of nature.

Orion the Hunter, accompanied by his mighty dog Sirius, is one of the few constellations that almost everyone knows. In New England, where I live, the pair appears during the colder months, rising in the southeast and arcing across the heavens while we sleep. There's no mistaking the two, because Sirius, the Dog Star, is the brightest star in the sky.

How did this celestial hound get up there? The Greeks said Zeus elevated Sirius to the heavens when the dog's master wooed a goddess and earned a share of immortality. For the Egyptians, Sirius was the abode of souls. The star's first appearance, in late summer, signaled the season for the Nile's recurrent flooding, marking a New Year and the restoration of life. Pyramids were often oriented toward the Dog Star, which served as a luminous beacon guiding the dead on their final journey.

At a little less than nine light years away, Sirius is nearly twice as luminescent as its closest competitor. So it's not surprising this object has been a magnet for myths and legends. But it is remarkable how many cultures—widely separated in time and geography—have associated man's best friend with the brightest lantern in the sky.

For the Chinese, Sirius was known as the Celestial Jackal or Heavenly Wolf. In one preserved mortuary vessel from the early Han dynasty (c. 250 BCE), T'ien Lang, as the dog is called, is depicted lunging with bared fangs at an archer, the constellation Chinese astronomers called the Bow.

For the native peoples of North America, the star held the same associations with dogs and the departed. The Pawnee called Sirius the Coyote or Wolf Star, one of the four pillars that supported the night sky and also the guide who accompanied spirits into the afterlife. For the Inuit people of Alaska, the "Moon-Dog" (as Sirius was known) played a similar role. Cherokee legends suggest that Sirius was one of two mighty dogs, the other being the brilliant star Antares, who together guarded the gates of eternity.

How did Sirius acquire its connection with canines and the great beyond, not only for Greeks and Romans, but also for the Egyptians, the Chinese, and Cherokee? Perhaps the link goes back to Neolithic times, when dogs were first domesticated. One of the first pieces of evidence of the interspecies bond dates back to 14,000 BCE, where dogs and humans can be found buried together at a site in Bonn-Oberkassel, Germany. In Israel, another of the earliest human interments has been excavated, dating back roughly 12,000 years. That grave site also contains the remains of a dog, alongside an elderly person whose hand has been placed rather touchingly on the shoulder of a young pup, as if petting or protecting it. From time immemorial, dogs and their human companions faced the unknown together. And as they pondered the darkness, perhaps inevitably, people's hopes turned toward the night's most lustrous object.


In India, the same traditions can be found. There, Sirius is called Svana, the dog of Yudhisthira, who is the hero of the religious epic the Mahabharata. Yudhisthira is renowned for his love of satya (truth) and dharma (righteousness), but his character is revealed most fully at the conclusion of the drama. Arduously, Yudhisthira and his brothers scale the peaks of the Himalayas on their final pilgrimage. One by one, the four brothers fall aside. But Yudhisthira, who is without sin, achieves the summit and there Indra, the King of Gods, prepares to take the hero to heaven in a golden chariot. Indra tells Yudhisthira he must leave his dog behind, however, as a creature not worthy of eternity. "There is no place in Heaven for persons with dogs," Indra announces.

Yudhisthira responds, "This dog, O Lord of the Past and the Present, is exceedingly devoted to me. He should go with me. My heart is full of compassion for him," and compassion is the great teaching of the Vedas. But you've renounced everything else, Indra reasons. Why not sacrifice this dog, too? Still, Yudhisthira won't betray his four-footed friend, even if it means forgoing bliss. "Hence, O great Indra, I shall not abandon this dog today from desire of my happiness." That's devotion.

At this moment of supreme self-denial, the dog morphs into a deity, who had just been testing Yudhisthira. The gates of paradise open for man and mutt alike. And Svana—whose name in Sanskrit means "dog"—takes his place in the firmament above.

Even Edgar Cayce mentioned the Dog Star in his psychic readings. According to reading 993-6, the ancient Egyptian Temple Beautiful, which was like a university for spiritual learning, had an opalescent hue in the heaven in the dome or ceiling. The Dog Star was specifically listed above one of the seven stations. 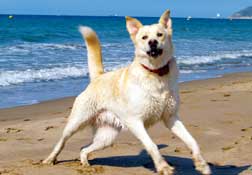 What wonderful old stories! They make the night seem less lonely, the stars a bit friendlier and more welcoming. And whatever heaven is out there or up there, beyond the Milky Way, it's good to think that pets are allowed.

Gary Kowalski is the author of numerous books on spirituality, nature, science and history, including the forthcoming volume Blessings of the Animals: Celebrating Our Kinship With All Creation (Lantern Books, 2012) from which this article is adapted. A graduate of Harvard College and the Harvard Divinity School, he has lectured at Association for Research and Enlightenment conferences. To contact Gary or see a complete list of his titles, visit his website at www.kowalskibooks.com.