A Study of Spiritual Evolution Part 2
By Hugh Lynn Cayce

(Note: The following is an excerpt of an article written in 1943 and included in the report document for reading 2265-1)

Mr. Cayce's account of these experiences is as follows:

"I see myself as a tiny dot out of my physical body, which lies inert before me. I find myself oppressed by darkness and there is a feeling of terrific loneliness. Suddenly, I am conscious of a white beam of light. As this tiny dot, I move upward following it, knowing that I must follow it or be lost. " 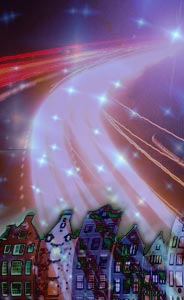 "As I move along this path of light I gradually become conscious of various levels upon which there is movement. Upon the first levels there are vague, horrible shapes, grotesque forms such as one sees in nightmares. Passing on, there begin to appear on either side misshapen forms of human beings with some part of the body magnified. Again there is change and I become conscious of gray-hooded forms moving downward. Gradually, these become lighter in color. Then the direction changes and these forms move upward and the color of the robes grows rapidly lighter. Next, there begin to appear on either side vague outlines of houses, walls, trees, etc., but everything is motionless. As I pass on, there is more light and movement in what appear to be normal cities and towns. With the growth of movement I become conscious of sounds, at first indistinct rumblings, then music, laughter, and singing of birds. There is more and more light, the colors become very beautiful, and there is the sound of wonderful music. The houses are left behind, ahead there is only a blending of sound and color. Quite suddenly I come upon a hall of records. It is a hall without walls, without ceiling, but I am conscious of seeing an old man who hands me a large book, a record of the individual for whom I seek information. I have had this experience some twenty-five times. The variations have been only slight ones."

General readings of explanation state that every soul makes a record of its experiences in every plane of consciousness. In other words, the soul finds expression in many planes in bodies or other suitable vehicles adapted to the dimension of that particular plane. In the earth plane it uses a physical body of three dimensions. All of its experience makes up the soul record for that particular entity (soul). It is these records with which Mr. Cayce makes attunement in obtaining the data for a Life Reading.

Just where this record is or how it is recorded cannot be explained here. We are approaching some understanding of the process through experiments with mental telepathy. Science is beginning to realize that thought registers perceivable forms and, like physical energy, cannot be and is not destroyed.

No one has ever found a picture of an old swimming hole engraved on a brain, but in a flash you can recall this and many other memories. Where is this record made? Is it in matter? Well, probably not in matter as we know it. This may give you some idea of the soul records which are tapped for Life Readings. There are individuals who can turn inward to their own soul records and open for themselves great storehouses of power. Our concern is with just how valuable the information, purported to be drawn from these records, can be made in our everyday life.

One of the most repeated statements in the readings given by Mr. Edgar Cayce is that the only real test of extrasensory information lies in its application to the ordinary daily needs. However exciting, however beautiful, in order to be of value such information must be good when tested in the living experiences of individuals. The underlying principle of all Life Readings is to conform to this point of view.

Considered as a whole the 1,300 Life Readings given by Edgar Cayce present a beautiful system of spiritual evolution. The human soul is explained as a significant creation having an important place in the scheme of the universe. Spiritual growth is the keynote of life through recognition, realization and appreciation of the Oneness of God.

This article will continue next week with Part 3 Astrological Influences.

Hugh Lynn Cayce (1907-1982) was the eldest son of Edgar Cayce and a leading thinker, author, and spokesperson for psychological and paranormal subjects. Before his death, Hugh Lynn served his father's Association for Research and Enlightenment, Inc. (A.R.E.), as chairman of the board. He was also author of the book Venture Inward, an examination of safe and unsafe methods of exploring personal psychic experiences and The Outer Limits of Edgar Cayce's Power which explores the relatively small number (200) of readings that appeared to be inaccurate. Visit EdgarCayce.org/radio to download podcasts of Hugh Lynn Cayce's lectures from the Archives.