Join
Thankful for Thanksgiving – And So Much More
Cindy Stone

I love celebrating anything. But Thanksgiving proves especially delicious. A holiday built around bountiful food, family, and friends, culminating in pie—come on!

Thank you, Native Americans and pilgrims who legendarily started the tradition in America. Thank you, farmers of poultry and pumpkin.

Thank you to my aunt who made the awesome chocolate cream pie with toasted walnuts. She refused to share her recipe, which was never written down but created from scratch memory only for Thanksgiving each year during my childhood. She passed recently; and will be forever remembered for so much more than her crusty concoctions—as if her pies weren’t everything (they were). As adults, my sisters and I have had great fun competing to replicate that miraculous pie. While we’ve come close, we never have quite re-created the memorable marvel that was my Aunt Daphine’s coco-cream wonder.

Though my daughters will never know the consuming joy of my aunt’s pies, they now have their own Thanksgiving competitions trying to re-create my giblet gravy (which notably does not contain giblets). I am thankful my daughters are all three healthy, alive, and loving, and beautiful from the inside out.

I am thankful to live in a country that has set aside a day to practice and honor the importance of being grateful. Imagine if expressing gratitude were a collective habit, engrained in media reports and social media posts alike. In multiple readings, Edgar Cayce repeatedly recommended the value of expressing appreciation:

Keep bright, sing often, pray thine own blessings of how much ye have to be thankful for, if ye keep in the spirit of truth.

So important is being thankful, it was a message through Cayce to the association during the 13th Annual A.R.E. Member Congress in 1944:

So conduct thine own life as to show thy appreciation of that which thou hast received. For he, or she, who neglects to be thankful builds that which is condemning in the own self.

I am grateful America’s systemic man-made divides are beginning to come apart at the seams, thanks to movements like #metoo and #blacklivesmatter and a Millennial generation who votes. Cayce might counsel to not give in or give up, and to maintain that genuine attitude of gratitude:

(Q) Any further advice? (A) Be persistent. Be consistent. Be prayerful, and thankful.

Our “founding fathers” had some great ideas, sure; but they had some that stunk like skunk, too. Chiefly, that only land-owning white men should vote. And the removal of Native Americans from their homeland, as another prime example. I am thankful we can learn from our mistakes. And I’m thankful to those working to restore voting rights for those who have paid their “debt” to society.

I’m thankful to work at a place like the unique corner of the world that is the A.R.E. (Where else could one use the retrograde of Mercury as a legitimate excuse for something missed?)

I’m thankful for being open-minded to concepts like astrology or the psychic. I mean, if we can scientifically know that the moon affects the ocean tides; is it really so far-fetched an idea that the gravitational pull of planets can affect us? And if everything is energy, shouldn’t the energy that is you have to go somewhere when your physical body ceases to function? And isn’t it possible or even likely that that energy is the energy that is your soul?

I am thankful for the ability to reason; and for the time to think about such things.

I’m thankful to be able to walk. And to sit (albeit for short periods of time, thanks to a slow-healing back injury sustained this summer.) I’m thankful to people with more serious injuries and illnesses who struggle through, inspiring me with their can-do, never-quit spirit.

I’m thankful to my cat, Mac, who has helped remind me of the importance of being still for some period of each day. And that you can be a lover and a fighter, as the situation demands.

I’m thankful for my husband, who has also taught me that love is worth fighting for.

I’m thankful to you, for reading this far, and for what you bring to the world that only you can. May Thanksgiving find you eating pie with those you love. Stay grateful.

Then be gracious, be thankful. 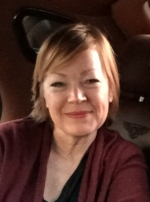 Cindy Stone is a coordinator on the A.R.E. marketing team. A relative newcomer to the Edgar Cayce material, she is an extreme appreciator of the concepts of holistic health, and adventurous explorer of the undeniable connection between mind, body and spirit. A California native and card-carrying member of the Choctaw Nation of Oklahoma, she resides in Virginia Beach with husband Chris and cat-master Mac. Her favorite Cayce freebie: Meditation aids, baby.

See all by Cindy Stone