As the September 18, 2014, date approaches for a vote on the referendum in Scotland to determine whether or not to leave the United Kingdom, a dilemma is brewing over the future of the “Stone of Destiny.” According to Adrian Gilbert, who researched the history of the stone for his book Secrets of the Stone Destiny: Legend, History, and Prophecy, this unassuming block of stone has an unusual history and a prophetic destiny. Currently, the stone resides in Edinburgh Castle, having been returned to Scotland in 1996 from England where it had witnessed the coronations of nearly all of England’s monarchs in Westminster Abbey since 1296. If Scotland votes to leave the United Kingdom, the Royal Family will face a dilemma: should they demand that the stone be returned to England, for the next coronation?

A Replica of the Stone of Scone
Source:http://en.wikipedia.org/

Known also as “Jacob’s Pillow,” “Lia-fail,” and the “Stone of Scone,” this block of sandstone with two rusted handles protruding from its ends, is quite unspectacular. Yet, much older than the Crown Jewels, it is of enormous cultural and symbolic significance. The stone had been an object of veneration to the Scots, who believed that “while it remained in the country, the State would be unshaken.” Seated upon it, their kings were traditionally crowned at Scone Abbey, the last being John Balliol in 1292. In 1296, the stone was appropriated by King Edward I of England (1239-1307) and taken back to Westminster Abbey in London. Thereafter nearly all the Kings and Queens of England (and after 1603 of Great Britain) have been crowned on Edward's throne with the stone embedded in its base. 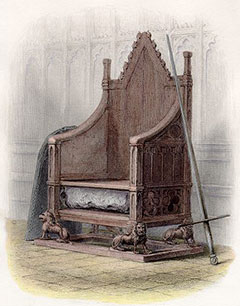 The Stone of Scone in the Coronation Chair
at Westminster Abbey, 1855.
Source:http://en.wikipedia.org/

On Christmas Eve 1950, the stone was stolen by a group of Scottish students and taken back to Scotland. It was returned a few months later, well in time for the coronation of Queen Elizabeth II in 1953. On November 30, 1996, with official sanction, the stone was again returned to Scotland—in time to mark the 700th anniversary of its removal from Scone. This was done at the request of Michael Forsyth, Secretary of State for Scotland. He had seen cabinet papers dating from 1950 that promised the students that the stone would eventually be returned to Scotland. Under the 50-year rule, these papers would soon be released and, he believed, cause embarrassment to Scottish MPs of the Conservative Government. He warned Prime Minister John Major that Alex Salmond (the leader of the Scottish National Party) could be relied upon to harness any feelings of grievance over the issue in his on-going campaign for an independent Scotland.

Though the secretary of state had maybe exaggerated the case, as a Scottish Conservative he had good reason to be concerned. He and Major knew they needed to do something to counterbalance the view that the English Conservative establishment was out of touch with Scottish opinion. In this context, returning the Stone of Destiny to Scotland seemed like a gesture well worth making. With luck it would garner them a few more votes and help to maintain the union between Scotland and the rest of the United Kingdom.

In the end, the gesture proved futile. The 1997 election saw the Conservatives lose their last Parliamentary seat in Scotland while a new Labour Government took power with Tony Blair. Blair, the new PM, immediately set about devolving power from Westminster to a new Scottish Parliament in Edinburgh. Since then the impetus for full Scottish independence has snow-balled. Today Alex Salmond is “First Minister” in Tony Blair's devolved Edinburgh Parliament. If his Scottish Nationalist Party wins the forthcoming referendum, then he will become the first Prime Minister of a fully independent Scotland since 1707. Perhaps, therefore, the return of the stone was a matter of destiny and was prophetic of the break-up of the United Kingdom.

Adrian Gilbert was born near London, where he attended St. Edmunds College as well as the University of Kent at Canterbury. In 1992, he met Robert Bauval and together they wrote what was to become an international bestseller, The Orion Mystery. Adrian has appeared in a number of documentaries, including two for the BBC: The Great Pyramid, Gateway to the Stars, and The Crystal Skulls. His A.R.E. Press book, Secrets of the Stone of Destiny: Legend, History, and Prophecy, is available from ARECatalog.com.