The Great Pyramid and Me
By Uwe Wilken

For many years, I have been finding links that connect my life to the Great Pyramid in Egypt. These personal coincidences and my continued interest in the pyramid suggest to me that I am somehow connected with the pyramid. It has taken many years for me to uncover and be ready to share this information. Within the Great Pyramid, I have discovered links to my name and birthday (when using numerology), two lines drawn from the Great Pyramid point to the country of my birth as well as to two cities in Russia with my name, and even my birthdate and time correlate with aspects of the Great Pyramid. With utmost humility, I present my background and some amazing coincidences from my search for adventure, fulfillment, love, and peace. 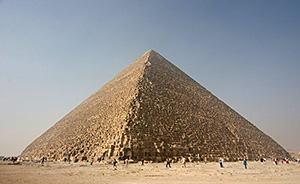 Even before high school, I had an interest in philosophy, including the mystery of life, the universe, and man’s ultimate origin. Attending Loyola University, my minor was philosophy, which I enjoyed immensely. My Jesuit teachers tried their best to steer me toward becoming a Catholic convert, possibly even joining the priesthood, but the Eastern influence, through the “love generation,” convinced me about reincarnation and that I am responsible for all my actions, thus creating my own destiny.

After a seven-year stretch of practicing Buddhism, I again “realized” a need to explore further avenues. I transferred my philosophical inquiries to metaphysics and the arcane philosophies, such as astrology (Eastern, Western), numerology, palmistry, the tarot, the I Ching, dream exploration, theosophy, and the work of Edgar Cayce. I moved to Virginia Beach, Va., the city of the worldwide headquarters of A.R.E.; and like so many other souls before me, I wanted to join in support of the Cayce vision. 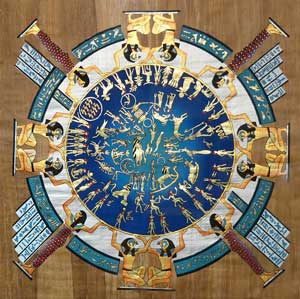 But it was astrology that impressed and taught me the most about myself. Using interpretations, transits, and solar progressions, I began by dissecting my own horoscope. After much reading in the astrological field, I found the Sabian Symbols, the individual 360 degrees of the horoscope, each one interpreted symbolically by a psychic named Elsie Wheeler. In the 1930s, the late famous astrologer Marc Edmund Jones conducted psychic sessions with Elsie, naming a degree for each of the 12 signs, and Elsie would give Marc her impression of that degree. Later, the famous philosopher/astrologer Dane Rudhyar came out with his own book on the symbols. In my horoscope, I discovered my first connection to the Great Pyramid: The angle cusp of my 7th House is 14° Sagittarius, which is interpreted as the “Sphinx and Pyramids Stand, Remains of a Glorious Past.”

Understanding the Cayce readings on the Great Pyramid and locating the Hall of Records became an obsession for me. It was reading 378-16 that started my Hall of Records quest: “…this in position lies, as the sun rises from the waters, the line of the shadow (or light) falls between the paws of the Sphinx, that was later set as the sentinel or guard, and which may not be entered from the connecting chambers from the Sphinx’s paw (right paw) until the time has been fulfilled when the changes must be active in this sphere of man’s experience. Between, then, the Sphinx and the river.”

Studying the reading, I tried to visualize how a shadow might throw some light on the records’ location. I wondered if the shadow of the Great Pyramid would ever “point” to the records. I began to read any books I could find on the Great Pyramid. One of my favorite books then verified another Great Pyramid connection—William Fix’s Pyramid Odyssey explored a commonly accepted structural engineering practice to determine the height of an object with the ratio of 7 to 11, where the height is 7/11th of its base. It seems that years ago surveyors had been in disagreement as to the Great Pyramid’s actual slope angle. This is because there is too little left at the pyramid from which to correctly measure this angle. So the ratio aids in the answer. I just happened to be born on the 7th day of the 11th month! My 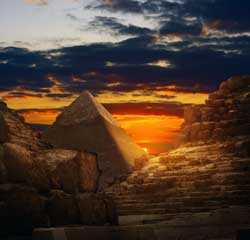 I tried to correctly draw the various shadows the Great Pyramid casts, especially during certain daytime hours and at different times of the year. This was a fairly arduous and time-consuming task. With advances to technology, I was able to utilize a computer and design software to bring my vision to life. As I became more proficient with the software, I created an exact scale model of all the Giza pyramids and the Sphinx in order to cast true shadows on the plateau.

Building the Great Pyramid digitally turned into a daily pre-occupation for me. The better I got at using the software, the more exact my models became. I created one revision after another in the pursuit of accuracy and mathematical precision. I figured that, in the future, once I had created it to a very finely tuned level, my model could be used as a study tool to verify the different themes and meanings of the inside and outside of the Great Pyramid. 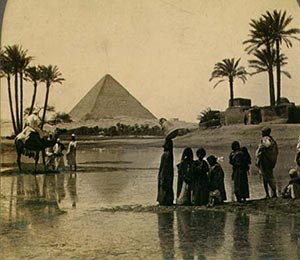 In an early book on the Great Pyramid, Piazzi Smyth wrote about the “Bethlehem Angle” when a line drawn of its passage angle of 26° from the Great Pyramid happens to pass through Bethlehem. I wondered about using its slope angle of 52° (rounded off) and ran these in both northeast and northwest directions. Using a specific style of map projection—a Mercator Projection world map—I extended the line northwest from the Great Pyramid: it crosses the country of my birth, Germany, and runs through the Frisian Islands off the northwest coast of Germany in the North Sea. It so happens that the origin of my name, Uwe, is Frisian. When drawing it to the northeast, it pointed very near to two Russian cities, one named Uva, (similar to the pronunciation of “Uwe” by Americans, and the way I always spell it phonetically), which is at 52° North, and nearby another city named Ufa.

Finally there is also numerology. My name, Uwe Wilken, translates to 355 593255, in numerology. There are five 5s in my name. The pyramid is 5-sided (actually 8-faced, with its indentations). I was born at 5:50 p.m. If I add up my first name I get 13—and that’s the number of acres the Great Pyramid covers.

But my very, very greatest find, after completing my scale digital model, was when I discovered my birth-date in the stones of the Great Pyramid! While I wasn’t looking for anything specific, in the view of the King’s Chamber, I noticed that there were seven chambers. Turning the view sideways, to the top of the pointed gables, I counted eleven. Again, there was that ratio of 7/11. I then counted just the most massive stones in the relieving chambers. To my amazement, it came to 43—the last two numbers of the year of my birth–1943! Perhaps I am stretching it, but it just all seems to fit.

Like the movie Raiders of the Lost Ark, I hope to discover when and where the Giza shadows might fall…in this case, to reveal the secret Hall of Records from the psychic readings of Edgar Cayce.

Uwe Wilken was born a year and a half before the end of WWII in Nazi Germany. He and his parents escaped from eastern Germany to Canada in 1952. His father worked as a house painter, and his mother as an insurance clerk, and they lived variously in New York, California, Colorado, and Virginia. While living in southern California, he attended high school and college, earning a degree in economics. He has been a part-time hippy, a Buddhist, and an astrologer. He retired from owning a rare and used bookshop in Norfolk, Va., in 2012 after 16 years. He and his former wife have a lovely daughter. He volunteers for the Edgar Cayce Foundation and A.R.E., where he has been a member since 1978. He enjoys outdoor photography and exploring the mysteries of the pyramids.