Looking Through Edgar Cayce’s Other Door
By Tina Erwin 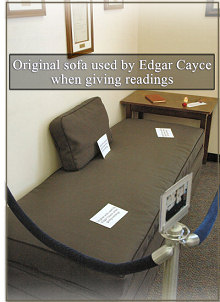 Edgar Cayce has been described as America’s “Sleeping Prophet.” He acquired this astounding reputation because he had the ability to fall asleep to give a “reading” to a person who requested help. He discovered at an early age that he could completely absorb the contents of a book if he placed the book under his pillow as he went to sleep. Cayce was also known to provide information about his own health situation when he arose in the morning. Quite literally, he gave new meaning to the phrase “I’ll sleep on it.”

Edgar Cayce was a very humble and profoundly spiritual man, spending his lifetime studying the Bible. He was also a person who was, frankly, not well educated. His formal education never extended beyond junior high school. He also did not spend his days studying medicine, or modern (much less ancient) history. Yet, Cayce was able to provide over 14,000 “readings” that can only be described as astounding. His topics ranged from what happened in Atlantis to a detailed diagnosis of a sick person, anywhere in the world, through the process of remote viewing, to providing information on future world events.

Many have asked the question: where did this information come from if Cayce himself did not have the educational background to provide it? This gives us a chance to look through Edgar Cayce’s “other door,” and that door opens to the other dimensions of the spiritual world.

Was someone else speaking through Edgar Cayce when he seemed to be asleep? Actually if we look at the Cayce phenomenon with an open mind, it would appear that another intelligence, not currently of this Earth, but extremely well acquainted with this planet, was using Edgar Cayce as a conduit for information. We are reasonably confident it was not Cayce personally speaking. First of all, from a linguistic point of view, the syntax and speech patterns are not modern, and are often awkward to understand. This was not the speech pattern of Edgar Cayce. Second, Cayce had no memory when he awoke of what he had said. Finally, the source of the readings answered this question for Cayce and others who asked. In reading 440-12, a man asked who had helped obtain the information which he received, and the answer was, “These have been rather of the universal…Not from the lower sources.” In reading 254-97, it is clearly explained that “there is the differentiation between communications from individuals or entities and the universal consciousness.”

We have to come to the conclusion that Edgar Cayce was a man so pure of heart that he could be “used” as a conduit for this information by ”the universal consciousness.” While Cayce was giving readings, it is safe to say that he was never asleep. He was in what is known as deep trance. When a person is in trance, he or she allows another spiritual intelligence to enter and use their body for the purpose of acquiring and sharing information. This is why the host person has no memory of what is said, because the host was not consciously speaking. The host gets him- or herself out of the way and lets someone else quite literally take over their body. In reading 254-67 “the entity Edgar Cayce” was described as being able to “wholly subjugate the physical consciousness as to allow the use of physical organs that may be attuned to all realms that pertain to psychic or mental or spiritual influences in the realms about the entity.” Thus, in a reading for himself, Cayce was told, “Be satisfied with nothing short of a universal consciousness, guided or guarded by the Lord of the Way, or the Way itself….Why be satisfied with a lesser portion than a whole measure?” (294-140)

So when we wonder, was the speaker an Angel or a Divine Being? Was he or she a person who no longer took on a mortal body? Perhaps we can take a peek through Mr. Cayce’s spiritual door. Through his experience, we are offered proof that there are Divine Intelligences on the other side of the mortal veil. They are real. Their existence is eternal and they are available to each and every one of us as well. Reading 254-30 affirms this: “All force is as one force. Hence the universal forces. All knowledge is one knowledge. Hence may be attained from the universal force or knowledge.”

Perhaps in our own humble way, we too, can connect to the Divine through our own daily spiritual practice of heartfelt prayer sent out to heal the world. The more we pray, the more we, too, connect to the Divine. The more we connect to the Divine, the more real, the more tangible those Divine realms become to us, as well as the beings who actually inhabit those realms. Perhaps there were many reasons for the events of Edgar Cayce’s life to play out the way they did. Possibly one of those reasons was to elegantly and compassionately offer us a peek through that spiritual door and glimpse the everlasting hope of life, love, and personal spiritual service.

Edgar Cayce used his powerful psychic ability from a place of the utmost integrity. He is one of the finest examples any of us can study in just exactly how to use any spiritual ability and hold ourselves up to the highest karmic/spiritual standards. He did not promise what he could not deliver. Cayce was honest in what he could and could not do for someone, and he realized that he could not heal everyone. No one could do that, not even the Christ, because not even Christ could randomly remove the karma of another person.

Edgar Cayce was truly the finest steward of the psychic and spiritual ability that he had. He was a humble man with a deep and powerful love of Christ, the Divine, and the spirit world. Cayce also loved all people of all religions so much that he would often sacrifice himself to help a person in great need. In the crazy world we live in, perhaps now and then it is a good practice to study those more spiritually advanced souls who walked among us, and follow their example of outstanding spiritual stewardship.