Ancient studies whose focus is on the United Kingdom might seem remotely distanced from more familiar ones that pertain to Egypt, India, and the Fertile Crescent, but the truth is that there appear to have been intimate connections between these regions in ancient times. More surprising still is the suggestion that key sites in Northern Scotland, whose significance is just now coming to the fore, were actually established before the era of dynastic Egypt, and may have exerted important influences on the ancient Egyptians themselves.

My interest in Northern Scotland came about as the result of a casual question, emailed from one of my book’s fans in Australia. He knew about the little stone farming village of Skara Brae on Orkney, and understood that, for nearly 200 years, local researchers have had difficulty aligning the excavated artifacts in a positive way with any particular ancient culture. He wondered if I thought if what we were seeing there could possibly reflect ancient Egyptian influences. My first impulse was that the site, which is dated to 3200 BC, was too early for that to be true. No credible researcher can think that the ancient Egyptians would have been capable of mounting an organized expedition to Scotland in what would have still been pre-dynastic times.

However, despite my knee-jerk reservation about the perspective of the question, if there is one thing I have learned during the course of my studies it is to carefully consider questions, such as this one, that are posed to me. More often than not, such questions have led me to important new insights about my own work.

Unlike ancient Egypt, which has presented us with a seemingly endless supply of excavated artifacts, art, texts, monuments, inscriptions, stone structures of many varieties, and mythic lore, we are met on Orkney with a relative paucity of evidence to work with. The site predates any written history, and most of the references we have to what life may have been like in Northern Scotland at 3200 BC, came to us through texts that were not set down until many thousands of years later. By comparison, we’re left primarily with the well-preserved remains of a set of stone houses, a handful of artifacts drawn largely from the detritus of the culture who lived there, a series of enigmatic megalithic stone structures built over a period of 600 years, and a few precious textual references to Orkney in the earliest Scandinavian Sagas. Since the site preceded the development of written language in most cultures, we have virtually no written texts whatsoever by which to even anchor an interpretation.

Outwardly, studies in the UK seem far removed from the major focus of my own work, which has centered on a modern-day primitive African tribe from Mali called the Dogon. However, appearances are not always what they seem, in that my perspective is that the Dogon may have actually been Egyptian during that same transitional era of 3000 BC, and so might have some pertinence to the questions involved. Moreover, the Dogon have done a superb job of preserving their civic traditions, rituals, myths and language in original form. If, in fact, my fan was correct in his thoughts about ancient Egyptian influences on Orkney, I would see commonalities to Dogon practices.

Recently I was reading a text about ancient Orkney that was written by John W. Hedges, an Orkney native who had been a lifelong professional archaeologist there. His book opens with the statement:

“This book is about the first settlers Orkney ever had; in fact, the first Orcadians there were. There is no doubt that they will seem strange to present-day eyes. Perhaps they will be thought more suited to recent Africa, the American West, Australasia, or Oceania.”

The timing of my book really could not have been better, in that it coincided with a recent BBC documentary series on Orkney Island, whose focus is on the pivotal role this region played in Neolithic times in the UK. The many well-preserved megalithic sites in the Orkneys—which include standing stones, stone circles, chambered cairns, barrows, and other architectural forms—provide us with important insights into the cosmologically-based tradition that gave rise to later wonders such as the standing stone structures at Avebury and Stonehenge.

It’s my pleasure to present this material for consideration to a group as well-versed in all aspects of ancient studies as the A.R.E. members, and to hear their comments and perspectives on it. As always, the true prize for my involvement with these esoteric subjects lies with the very interesting and insightful people I have the opportunities to meet. 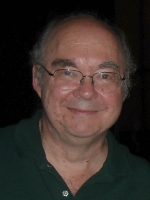 Laird Scranton, a software designer from Albany, New York, is the author of two books on African and Egyptian cosmology and language. He has also been featured in John Anthony West’s Magical Egypt documentary and Carmen Boulter’s The Pyramid Code. Laird has been a featured speaker at A.R.E.'s Annual Ancient Mysteries Conference.

See all by Laird Scranton

From the readings of Edgar Cayce to the Egyptian legends that appear in papyruses, on temple walls, and in pyramid texts--Van Auken presents a complete picture that reveals the full story of priestesses, healers, female pharaohs, and gods among humans. This book includes more than 80 illustrations, and the seven stages of soul growth.