The Science of God
By Tina Erwin

There are those who can easily separate the spiritual world from the world of science. Many people believe that science has absolutely nothing to do with God, that God is somehow neatly separated from the world of logic and fact. However, one has only to study the world of nature to see the hand of God in every single element that is life itself.

God is the first scientist, mathematician, chemist, geologist, astrophysicists, psychologist, sociologist, musician, biologist, physician and metaphysician. God is all science, all math, and all elements of the humanities, because God is ultimately, all of everything.

The truest metaphysician—one who studies that which is beyond known physics—understands that to begin to know God, you have to know science. God and science are one. You can no more separate them than you can separate the night from the day. The irony is that the very fact that human beings do not “know it all” proves that there is a vast universe of knowledge that was/is divinely inspired. Inspiration literally comes from that spark of divine connection that allows us a peek at the larger picture. But can we prove to those diehard separatists that there is only the light of the Divine in the study of the “hard” sciences? Of course we can!

Ultimately, everything in all of life is a function of a mathematical formula. Every single thing that exists is part of a larger [math] pattern. As an example, look at any fern leaf as it is all curled up, or a pine cone spiral, a sunflower seed pattern, a chambered nautilus, a humble snail shell, a pyramid, and the Milky Way galaxy to name just a few. What they all have in common is the following mathematical formula: 1+ 1+ 2+ 3+ 5+ 8+ 13+ 21. This is called the Fibonacci sequence or number. This purely mathematical formula, this elegant element of essential science, exists throughout the Universe. How is this possible if not divinely inspired? 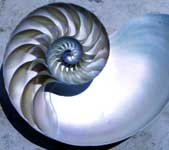 All existence is math, from the frequencies of light, color, sound, and smell to the densities of minerals, the math of plants, and the perspectives of literally moving through the air from one point to another. Look around you. Every single thing is math and can be described by some type of math formula. That discipline, that consistency, that perfection, is ultimately Divine.

What about human beings? What causes the human heart to beat for the first time? Where does the energy come from, allowing that to happen? How can the human body be one astounding math and science experiment? How can the human brain balance the requirements to understand complex math calculations as well as the emotional tenderness required to love another human being? How do we know how to do that? Is human and animal instinct just another word for math programming—with an emotional heart? What is the math of emotion?

What of architecture? Isn’t architecture the mathematical inspiration to energetically shape space? The more mathematically balanced the space, the better we each can feel, physically and emotionally.

How can it be that energy—no matter what its form—can neither be created nor destroyed? Why is it utterly impossible to give a scientific definition of energy itself? Even the United States Navy, in their training classes, explains that energy is not definable by itself. Energy is explainable only by how it relates to everything else. Perhaps energy is only as definable as God is definable, and we are all still working on that.

As we each seek to take greater steps on our spiritual path, perhaps it is a good idea to look for the science in our spiritual moments, the math in the mundane elements of our days and the inspired ideals of our own individuality. We are all God inspired, mathematically perfect science projects. Perhaps looking at life that way will offer a new spiritually scientific perspective on the way we view even life itself.

Q) “[…Matter then would be the offspring of energy and not the parent, as is often thought.]" Is this correctly stated?
A) Correctly stated, and just what happens in the human organism.
Edgar Cayce Reading 195-70