The Stars Above, the Great Pyramid
Below: 10,400 BCE
By Don Carroll

There has been much discussion and controversy over the date of construction of the Great Pyramid. Mainstream Egyptologists place its construction at approximately 2500 BCE, but there are several researchers that suggest it is much older, and date the pyramid closer to 10,000 BCE. The Edgar Cayce readings were very specific about the dates, placing the building of the Great Pyramid from 10,490 to 10,390 BCE.

Some of the methodologies used in establishing its date of construction use the astronomical positions of the stars for the time periods championed by each school of researcher. These experts debate the alignment of stars and constellations to such points as the north entrance of the Great Pyramid and the north and south “airshafts” from the King’s and Queen’s chambers. Because of precession—the movement of the earth’s axis—there is a shift in the position of the stars. Because the precessional cycle is approximately 26,000 years, we can calculate historical dates based on star alignments. For example, our current polestar (North Star) is Polaris. But this changes as we move backward in time. In 3000 BCE it was the star Thuban, located in the constellation of Draco, and in 12,000 BCE the polestar was Vega, in the constellation of Lyra.

During the construction dates of the Great Pyramid from the Cayce readings (10,490- 10,390 BCE), there was no specific polestar. There was instead a trinity of stars spinning around the celestial North Pole. During this ancient time, this star trinity was circumpolar, meaning that as viewed from this north latitude they never set below the horizon. The Egyptians called them the “Imperishables.” This trinity of stars, through thousands of years, has shifted in our view of the sky and now dips below the horizon during the year. Today the trinity, known as the Summer Triangle, consists of three stars, Deneb, Vega, and Altair, each connected to a separate constellation — Cygnus, Lyra, and Aquila, respectively. 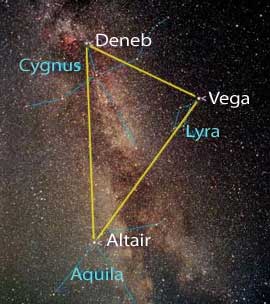 Through different ages and cultures, each of these three constellations has represented birds. It is easy to imagine the ancients looking into the sky above the Great Pyramid in 10,400 BCE and seeing a slowly turning triangle with three birds circling the center, one for each point of the triangle.

The symbolic image of the bird above the Great Pyramid in this stellar triangle of the north, is repeated in the Egyptian Benben stone, the pyramidal stone atop an obelisk or the apex of a pyramid. This important stone represented the Benu bird, believed to be the original Phoenix, depicting rebirth and resurrection. 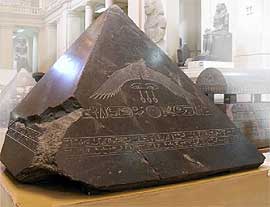 The Cayce readings also state that the Great Pyramid was oriented in association to locations of various stars:

For the date that the Cayce readings set for the building of the Great Pyramid, what better example of “as above, so below” could be provided in the stars than this stellar triangle that also represents three celestial birds circling above. These would not only represent the pyramid itself, but the Benu bird of rebirth and resurrection. Such representation would fit aptly for the initiation purposes of the Great Pyramid from the Cayce readings.

(Q) Please describe Jesus' initiations in Egypt, telling if the Gospel reference to "three days and nights in the grave or tomb," possibly in the shape of a cross, indicate a special initiation.
(A) This is a portion of the initiation—it is a part of the passage through that to which each soul is to attain in its development, as has the world through each period of their incarnation in the earth. As is supposed, the record of the earth through the passage through the tomb, or the pyramid, is that through which each entity, each soul, as an initiate must pass for the attaining to the releasing of same—as indicated by the empty tomb, which has never been filled...
Edgar Cayce Reading 2067-7

Again the number three is noted in this rebirth-and-resurrection initiation matching the trinity of stars above, the symbolism of the three bird constellations, and the Egyptian Benu bird. So as Egyptologists and researchers look to the stars above to help validate their theories of the construction date and purpose of the Great Pyramid below, we are provided with insight to the true purpose and another validation from the Cayce readings.

Don Carroll had a career of over thirty years in the Fire/Rescue service. After receiving his degree in Fire Science, he worked as a district chief for a battalion, an operations company officer, an emergency medical technician, a paramedic, and a teacher at the regional fire academy. While raising a family, he pursued the greater meaning of life, reading materials on Edgar Cayce and attending A.R.E. conferences, seminars, tours, and retreats. He is the author of the article The Cayce Cubit and the Kundalini in the Oct.-Dec. issue of Venture Inward Magazine, available in the online member-only section.