The Story Behind
the Fort Dearborn Massacre
By John Fuhler 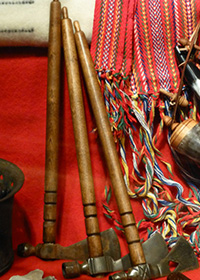 More than four dozen readings provide details for the events around and about Fort Dearborn at the time of the August 15, 1812 massacre. Often the information provided by the readings concurs with historical data; and sometimes it does not.

With the passage of the Northwest Ordinance in 1787, the United States designated the land south of the Great Lakes, East of the Mississippi River, and north of the Ohio River as Indian territory. The ordinance specifically prohibited white settlement in the Northwest Territory. Although the United States recognized a limited sovereignty of the resident tribes, many settlers, land speculators and even state governments treated the Indians as obstacles to be removed.i In effect, the Northwest Ordinance became a tool to promote aggressive settlement in the territory, guaranteeing the displacement of entire tribes and the demise of any hope of a permanent confederacy of Indian nations. The recognition of that potentiality had motivated the great Shawnee leader, Tecumseh, to strive to unify as many tribes as possible to realize that dream. It also led him to align his warriors with the British in the War of 1812. It is almost certainly Tecumseh's "Rebellion" to which reading 3003-1 refers:

…the entity was in the land…in what is now…Dearborn, when there was the fleeing of many from the Fort because of the uprising through that portion of the land.
(Edgar Cayce Reading 3003-1)

At the time of the massacre, the Potawatomi controlled a territory extending across northern Indiana, northern Illinois, and in central and eastern Wisconsin. The only parcel within that territory not under their sovereign authority was the six square miles at the mouth of the Chicago River ceded to the United States in 1795.ii Against this backdrop, then, unfolded the events of that horrid summer morning.

…the entity was in that land…during those periods when there were the settlings in the land, and particularly in those adjacent lands to what is now Fort Dearborn…
(Edgar Cayce Reading 823-1)

Fort Dearborn's captain, Nathan Heald, wrote that his decision to destroy the ammunitions, arms, and alcohol triggered the attack that day.iii On August 13, 1812, he had met with representatives of the Potawatomi in order to discuss the distribution of the stores that the troops would leave behind. Entity [342] was apparently privy to these discussions:

But the readings cite another and probably more important reason for the attacks:

…the entity was in that land…during those periods when there were the settlings in the land, and particularly in those adjacent lands to what is now Fort Dearborn…
(Edgar Cayce Reading 823-1)

It was the encroachment of white settlers in the land that triggered the assault that day. History records at least 50 dead, 42 captured, ransomed or released, 12 rescued and five escaped.iv Seventeen readings specifically refer to escapees, captives, or massacre victims.v

Both the readings and history record the remarkable fact that the Indians permitted traders to remain in the land. Apparently the Indians placed great value on these relationships.

…the entity was in the land…when there were…people being driven from Fort Dearborn...among those in the trading business…While others fled, the entity made peace – and later became a part of an activity for the building up farther to the west.
(Edgar Cayce Reading 3581-1)

One trader, John Kinzie, whose trade depot occupied the north bank of the Chicago River opposite the fort, faced imminent death. The Potawatomi had occupied his house and were threatening to slaughter him and his family, when Sauganash, (aka, Billy Caldwell), son of a British officer, interceded to save their lives.vi

…the entity was in the land now known as…Dearborn…during those periods of turmoils and strifes as brought about the destroying, or destruction, or warring upon the old fort.
(Edgar Cayce Reading 2385-1)

There were no victors in the War of 1812, from a material perspective, but the Indians were certainly the biggest losers. From a spiritual perspective, some of the entities there gained through their heroic attempts to save and protect those around them. Some gained in their attempts to promote peace and harmonious relationships. Others created their own personal hells through self-recrimination. And still others lost due to their selfishness. Materially speaking, many of those involved lost, if not their lives, then their resources. Some of those who received readings continued to bear the emotional scars. Only a few came away relatively unscathed.

Photos courtesy of the John Fuhler