Building upon the Firm Foundation in the blog Part I of The Teachings, Part II explores the Mosaic influence on the teaching of the Law of One that was being developed in the Americas and the parallels in belief across different cultures that were thought to have evolved independently.

The readings explain that Judaism preserves the records, as well:

…the story [of the projections in Atlantis] as is given in Judaism doesn’t vary a great deal from that of the Chaldean; neither does it vary at all from that…in Yucatan… (364-9)

Much might be given respecting…these records of the race, of the developments, of the laws pertaining to One…to be opened only when... the change was imminent in the earth…influences that have been given…in the records that have been kept by those sojourners in this land of the Semitic peoples. (378-16)

These Lost tribes traveled to the American Southwest and shared their tenets, truths, and traditions with the people living there:

...among those born to those who escaped across the waters into what is now the southwestern portion of the entity's present native land [America]…the entity was made a priestess-as in keeping with a combination of the old Mosaic teachings and those of Ax-Tell and the children of the Law of One. (2540-1)

The infusion of different cultures influenced the understanding and teaching of the law of One and the temples constructed to express their beliefs.

This again found a change when there were the injections from those peoples that came with the division…in that called the promise land. Hence we may find in these ruins that which partakes of the Egyptian, Lemurian and Oz civilizations, and the later activities partaking even of the Mosaic activities. (5750-1)

In Central America, the Yucatan, and in Egypt the stepped pyramid imitates the daylight sky; both are metaphors for the Upper World. In each culture the people conceived of a corresponding stepped pyramid below the ground, sharing the same base, and symbolizing the night sky as a metaphor for the Underworld. 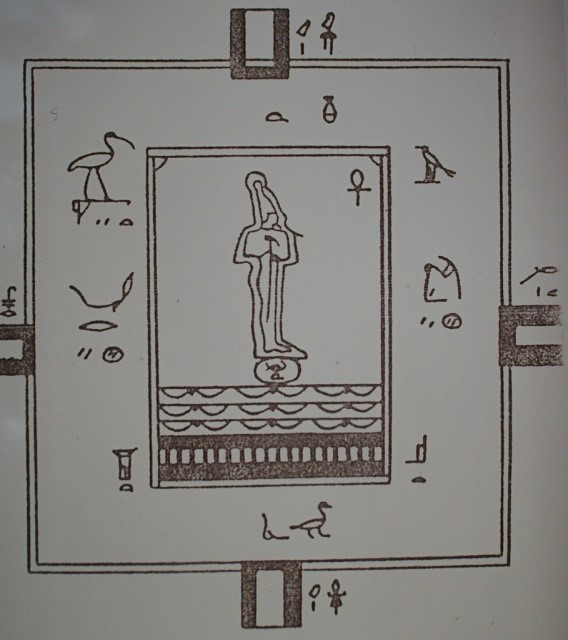 In Egypt, these relationships find expression especially in the structure of the House of Life, one of the most exclusive and secret of all Egyptian mystical teachings. In the House of Life Isis, Nephthys, Thoth, and Ra protect the four corners, while Nut guards the sky and Geb, the earth. The resurrected Osiris stands in the midst of the structure.

These metaphors represent birth, death, and resurrection. The sky revealed the path through the underworld, as well as the place of rebirth. As Cayce reading report 5746-1 asserts, the pyramid represents "those looking toward light (God)" and "Revelation." It was just so with the Maya and Egyptians.

Judaism preserves a similar mystical construct. Several thousand years ago, God revealed The Book of Foundations to Abraham. In a highly streamlined and symbolic fashion, this small book describes the manifest universe of potentials in terms of the four cardinal directions, the above, the below, and the center. According to the text, God set the limits of the structure with every possible three-letter combination of the letters comprising the Holy Name, thereby creating the so-called Cube of Space. Lines connecting the centers of each cube face to the centers of every other face and define an Octahedron, the axes of which meet at the center.

Each of these nodal points and the center represents one of the planets, the sun, and the moon, as in: sun, moon, Mercury, Venus, Mars, Jupiter, and Saturn. The edges of the cube correspond to the twelve zodiac signs.

This mysticism underlies many metaphors present in the Jewish Bible, as well as in the Revelation. For example, the Holy of Holies in the Tabernacle, Solomon's Temple, and the Second Temple resembles the Cube of Space. It represents the Garden of Eden where the Presence of the Lord dwelt with humanity. Prophetically, it represents the Messianic Kingdom, our ultimate destination. In the Revelation, the metaphor of the cubic New Jerusalem corresponds to this consummation.

Jacob's dream contains several elements corresponding to this mystical system. The word usually translated as 'ladder' actually means a type of mound, and probably refers to a ziggurat (a rectangular, stepped tower). After his dream, Jacob declared, "Surely the majesty of the Presence of the Lord inhabits this place." Here the Seed of Jacob occupies the cardinal directions, which is God's promise to Israel. The center is Bethel, 'the House of God.' As the Egyptian and Maya priests did, so the Sages of Israel kept this knowledge secret. They forbade discussing it with more than one person, and then only in a whisper.

Among the Lakota, the octahedral structure conforms to the elements of the pipe ceremony, in which the participants offer prayers to each of the seven directions. Every major Lakota ritual incorporates the pipe ceremony at its center. Every Lakota adolescent had to learn this cosmology, by which s/he learned the oneness of all things.

All these systems share numerous points in common, but one reading expresses all this exceptionally well: