The Wisdom of the Dream Maker Within
By Barbara A. Derrick, PhD

Edgar Cayce, the most documented seer of the 20th century, made an extraordinary claim— anyone could do what he did. Not only did he make this startling claim, but he encouraged others to explore, research, and verify what he said.

While lying on a couch, Edgar Cayce could place himself into a trance and answer any question about any topic put to him using the technical knowledge and language of the finest scholar. The information, he said, came from the “Universal Consciousness” that runs like a river through time.

How? “In the experiences in the earth, one only meets self. Learn then to stand oft aside and watch self pass by.” (Edgar Cayce reading 3292-1)

Cayce gave this advice to 16 people under many different circumstances. I have applied this to my own studies, particularly of my dreams.

“In dreams…each individual soul…reviews or sees from a different attitude those experiences of its own activities.” (Edgar Cayce Reading 256-136)

In dreams, we view ourselves from a different perspective. What a gift—to see ourselves as others see us. When asked how dreams should be interpreted, Edgar Cayce said dreams are given for the better understanding of self. He answers that dreams “correlate those truths that are enacted in each and every dream that becomes a part of the entity of the individual to use (for the purpose of) better development; ever remembering that ‘develop’ means going toward the higher forces, or the Creator.” (Edgar Cayce Reading 3744-4) Often having this view isn’t pleasant, but it’s worthwhile.

I experienced this in my own dreams: I wanted a career in journalism and hoped my written work would help others and influence the world long after my death. A message came at the conclusion of a dream in which I could see myself walking down the beach looking for a treasure chest that contained my greatest gift to the world. I saw an obstacle obscuring my way to the treasure chest. Are there not always some obstacles we need to remove to reach the ultimate in our spiritual experience?

Only a corner of the chest was visible above the sand. I cleared the sand away and lifted the lid. Inside there were only pieces of paper containing some of my writings. My heart sank. How could this be of any use to anyone? This was nothing. Paper and the writing on paper were so fragile, so easily lost or destroyed. Worthless. I felt sick at heart. If this is all I have to leave to the world, I will have lived in vain. Suddenly the words came to me that I knew were coming from Christ, “I left only spoken words.”

My focus had been on what I wanted to leave to the world. My thoughts had never included leaving the harvest to a loving Creator.

Another dream alerted me to my own assessment of who I was:

I observed a child confined to a room. The child had bedsores and appeared “crazy” because she had been confined for so long. The air was stale with an unpleasant odor about it. I got the child out of the room and soon she no longer appeared “crazy” but was bright beyond belief. The child was attractive and learned rapidly once out of the room, cleaned up, and treated as if she were normal. Under good care, the child was exceptional. When it was time to take the child back, I wondered whether to report the situation to the authorities. I feared those in authority over the child would return her to the same environment. 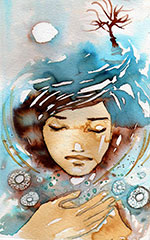 At the time of this dream, I was launching into a new venture. Until this time, I had confined myself to my home and family, having accepted what I felt was the mandate to bury myself in service to my husband and children. Now, I was pursuing interests outside of the home. I applied to graduate school, a seminary. I felt like a child who had been confined to a room and not permitted to develop normally. Most of the people at seminary were professional people of one sort or another, and I felt “disabled” by not having more exposure to the world. I thought of myself as underdeveloped. I was the child in my dream. The dream assured me that the “child” was not only normal, but could be exceptional. My fear of returning to a confining environment was sparked by fear that perhaps I could not measure up at seminary and I would be sent home, never to venture into the world outside the home again.

The dream helped me. The child in this dream is an archetypal symbol. A child represents a new life, a new beginning. At seminary and thereafter, doors have opened for me, which never would have opened without this very first step.

So, in both of these dreams I saw myself as I had never seen myself before. I did, indeed, as Edgar Cayce said, “Step aside and watch self pass by.”

Barbara Derrick, PhD, a researcher, lecturer and writer on Edgar Cayce, is a counselor, family therapist, and mental health specialist who has successfully used a protocol suggested by Edgar Cayce to enhance and improve the lives of Alzheimer's patients. She has presented at the Edgar Cayce Health Symposium at Virginia Beach and her articles have appeared in Venture Inward magazine, available exclusively to Members by mail or online at EdgarCayce.org/members.