Join
Thoughts on Suicide and the Afterlife
Anthony Quinata

Ghosts and the Afterlife

This blog post is excerpted from the book from We Are Never Alone, published by 4th Dimension Press (an imprint of A.R.E. Press) and available at ARECatalog.com.

Q. My son died of suicide, depressed, and addicted. What was his life review like? Was he instantly healed of those issues or does he have something to do before he finds peace? Is he okay now?

A. First of all I want to thank you for having the courage to ask this question. As I said before, suicide is the skeleton in all of our closets. I’m going to answer your questions from the point of view of my experience as a medium, dealing with suicides, and not as a counselor or therapist.

Whenever I have a session during which a soul who has crossed himself over comes through, one of the first things he wants to assure his loved ones of is the fact that he is at peace and safely in the arms of God. Whatever torment caused him to choose to end his live here no longer exists for him on the Other Side. Souls have said that the Eternal Light of Love understands that those who take their own lives didn’t want to die as much as they wanted only to end their torment. These souls simply don’t have the strength or desire to continue any longer in this life than they have to. Many of these precious souls have said during my sessions with them that even though they functioned in a way that allowed them to get through the day “normally,” their mental torment was a huge factor in their decision.

Your son was not judged for what he did nor was he condemned to “hell.” It’s quite the opposite, actually. Based on what the souls have said to me before, he may have been taken to a place where he could reflect, and heal, from the anguish that he had endured and had thought there was no way out of. During this time and in this place, there is no one to get in his face, so to speak. His companions during this period will be small creatures such as birds, rabbits, kittens, puppies, cats, and dogs as well as other animals that are there to help the healing process by offering unconditional love to souls such as your son’s.

Only when he is strong enough, will relatives, friends, and guides appear to help him understand and learn what he needs to know to continue on his spiritual journey. Christ also appears, not as a judge, but more as a consoler, helping him through his hurt and confusion over what he’s done.

God doesn’t make mistakes, but understands when we do. The souls have told me over and over that suicide is a mistake on the part of those who have ended their time here in this way. It’s a blunder they committed in their confusion. They take complete responsibility for what they’ve done and insist that there’s nothing for their loved ones, who are still here, to feel guilty about.

Finally, your son would want you to know that you will be reunited with him on the Other Side, when you’ve learned the lessons you’re here to learn, and not see suicide as a way to speed up the reunion. Until then he will continue to be with you as your “guardian angel,” never abandoning you or leaving your side. He will continue doing the best he can to help you understand that everything which happens in this life benefits you in the next—even surviving the tragedy of his suicide.

Q. From what I’ve read, you say that you’ve never heard from a soul who took responsibility for ending its own life express regret over what it had done. Yet, you also say that souls discourage their loved ones from doing the same thing, saying that what they did was a mistake. Is it because suicide is not part of any soul’s plan for when they incarnate in the first place?

A. First of all, let me just say that while the souls who have crossed over by their own hand don’t talk about “regret” with regards to what they did, they understand that it probably wasn’t the best decision on their part. Due to the constant confusion in their lives, many, if not all, of those, who pass by their own hand, thought that the decision to end their lives was a good one. These souls are not judged by the Eternal Light of Love but are treated in a very special way because the anguish they went through was to their spirit as cancer is to the physical body.

For that reason, whenever the souls speak of “regret,” it’s not over anything that they’ve done, but the things that they didn’t do. When they ended their life by their own hand, they also cut short the opportunities to learn from the experiences that life has to offer to us. But as the souls once told me, “When someone doesn’t like himself, his soul shrivels up.”

A woman named Debbie booked an appointment to see me. Even though she paid for a medium session, she wasn’t sure that’s what she needed. “I just felt compelled to call you. I don’t know why, but it was like the spirits wanted me to talk to you.” The last time I had seen her was probably three years before. Since that time she had divorced a man who was mentally and emotionally abusing her, telling her she wasn’t lovable which, unfortunately, she believed. She told me that since her divorce she had tried to take her own life twice in two weeks. The first time she was saved, ironically enough, by her ex-husband. The second time she told me that she knew God was telling her that this wasn’t the right thing to do, so she took steps to get help after she took an overdose of pills. Since she didn’t book an appointment to help her with her grief over losing someone she had loved, I felt the souls wanted me to help her deal with her distress over being alive. I shared with her a little of what the souls have told me about suicide, and I thought I’d share the same with you in this post.

Whenever someone comes across who has taken his own life, one of the ways I know is that his energy is as heavy at it gets. After doing a number of readings in which victims of suicide come through, I’ve come to understand that suicide is a disease that slowly erodes the person’s will to live. For most of us, when we experience times that make us question how much more we can take, we respond by developing ways of coping until the pain passes or we overcome whatever obstacles are in our way. For these precious souls however, they just don’t seem to be able to do that. I don’t think it’s because of a weakness in their character. In fact, it may be the opposite . . . they may just be too good for this world. Whatever the reason, they aren’t able to develop the protective barrier around themselves that they need to withstand the trials and tribulations we must all face during our life here. When this happens, they choose to learn the lessons they need in a world of peace. I have never had a soul that chose this route say that it regretted its decision, but every one of them cautioned their loved ones against doing the same. Why? Because the lessons are so much easier to learn here.

Darlene wanted to take her own life because she felt unlovable. She married a man who constantly reinforced this belief. The lesson she’s meant to learn is that she is lovable. She was created by the Eternal Light of Love who finds her impossible not to love, especially in her darkest moments. If she were successful in either one of her attempts, she would still have to learn why she’s lovable, ironically, in an environment in which she is surrounded and supported by God’s love. In other words, she’ll find herself overwhelmed by love, not knowing why, because she crossed over not believing she was worthy of being loved. Not only that, but she’ll have to learn why without the benefit of anyone getting in her face.

What I did with Debbie that night was to have her question whether she truly was unlovable. “I see you the same way God sees all of his children,” I told her. “I see you as perfect, just the way you are. What’s not to love?” I then helped her find all the reasons she is lovable. She left our appointment shining with joy and hope. “Besides,” I told her, “You still have lessons to learn and to teach others.” “How do you know?” she asked me. “You’re still breathing.”

Posted In:
Ghosts and the Afterlife 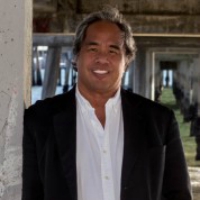 Anthony Quinata is a gifted medium, speaker, and author. Anthony is furthering his work with this new work that reads as a Q&A to the spirits on the other side, covering 52 topics in a discussion format that is both readable and dynamic. Questions answered from the other side are those that have arisen around his work as a medium. His first book, Communications from the Other Side, is also available from ARECatalog.com.

See all by Anthony Quinata 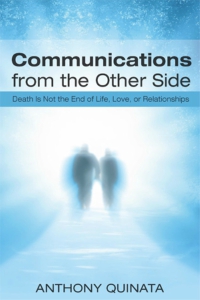