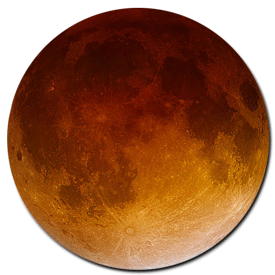 On the evening of September 27, skywatchers throughout North America will be treated to one of nature’s grandest celestial sky shows—a total eclipse of the Moon. And unlike the one in April (2015), which occurred in the early predawn hours, this one will happen during convenient evening ones.

This cosmic spectacle begins with the full Moon entering the Earth’s dark inner shadow (the “umbra”) at 9:06 p.m. Eastern Daylight Time, and continuing to become ever-more fully immersed in it for the next hour. Totality itself will start at 10:11 p.m. EDT, and last more than one hour until 11:23 p.m. EDT, after which the Moon begins to slowly emerge from the cone of darkness in reverse order. Adding to the beauty of the overall scene at this eclipse (especially during totality itself, while the sky is dark), the Moon will be accompanied by some of the early rising bright winter stars.

There are several interesting things to notice as you watch this event unfold. Most obvious are the darkness of the eclipsed Moon and the range of colors displayed, both of which vary from one eclipse to another. These depend on the clarity of the Earth’s atmosphere at the time, which refracts or bends sunlight around into the umbral shadow. There have actually been eclipses so dark that the Moon remained all-but invisible during totality—and ones so pale that you had to look carefully to see that there was even an eclipse in progress! Among the colors that have been seen are shades of reddish-orange, brown, copper, rose, and even blood-red. Notice, too, that the Earth’s shadow is curved at all phases of the eclipse, as the Moon passes through it. This is direct proof that the Earth itself is round— something recognized by many early skywatchers. And finally, realize that you’re actually seeing our lovely satellite move eastward in its orbit — as it first passes into, through, and then out of the shadow at roughly its own diameter each hour.

While lunar eclipses can certainly be enjoyed with the unaided eye alone (as they have been throughout most of history!), they are best-seen in binoculars. An ideal pair for this would be a 7x50 or 10x50 glass, the first number indicating its magnification and the second the aperture in millimeters. Telescopes themselves, with their relatively narrow fields of view, typically don’t provide enough sky coverage around the Moon to get the full effect of its globe being suspended in space. An exception here, however, is Edmund Scientifics’ amazing Astroscan wide-field reflecting telescope. Providing a three-degree actual field of view at its low magnification of 16x, it takes in an astounding six full-Moon-diameters of sky— something many have described as looking through the porthole of a spaceship!

James Mullaney is an astronomy author, speaker, and consultant who has published nearly 1,000 articles and nine books on observing the wonders of the heavens, including Edgar Cayce on the Cosmos. He has logged over 20,000 hours of stargazing time with the unaided eye, binoculars, and telescopes. Formerly Curator of the Buhl Planetarium & Institute of Popular Science in Pittsburgh, and Director of the DuPont Planetarium at USCA, he served as staff astronomer at the University of Pittsburgh's Allegheny Observatory and as an editor for Sky & Telescope magazine. One of the contributors to Carl Sagan's award-winning "Cosmos" PBS-Television series, his work has received recognition over the years from such notables (and fellow stargazers) as Sir Arthur Clarke, Johnny Carson, Ray Bradbury, Dr. Wernher von Braun, and former student NASA scientist/astronaut Dr. Jay Apt. His lifelong mission has been to "Celebrate the Universe!" and get others to look up at the majesty of the night sky to personally experience the joys of stargazing. In recognition of his work he has been elected a Fellow of the prestigious Royal Astronomical Society of London.