Toward a Universal Christ
By John Van Auken 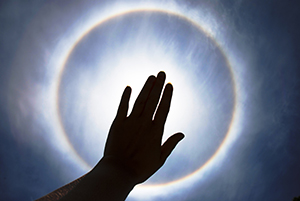 With his outer mind quietly set aside and his deeper mind at-one with the Universal Consciousness, Edgar Cayce told us, “…know what you will do with this man, Jesus of Nazareth—Jeshua of Jerusalem, Joshua in Shiloh, Joseph in the court of Pharaoh, Melchizedek, as he blessed Abraham, Enoch as he warned the people, Adam as he listened to Eve.” (3054-4) In a reading for a person who had both Jewish and Christian training and was wrestling to decide which religion he preferred, the Source of Cayce’s readings asked: “Have you not found that the essence, the truth, the real truth is ONE? Mercy and justice; peace and harmony. For without Moses and his leader Joshua (that was bodily Jesus) there is no Christ. Christ is not a man. Jesus was the man; Christ the messenger; Christ in all ages, Jesus in one, Joshua in another, Melchizedek in another; these be those that led Judaism! These be they that came as that child of promise, as to the children of promise; and the promise is in you, that you lead as He has given you: ‘Feed my sheep.’” (991-1)

Obviously, when in contact with the Universal Consciousness, Cayce’s perspective on Jesus Christ is much different from that of the church and even of his own outer self. Cayce and his family were Bible-reading Christians. Yet, when he set aside his outer self and lifted his deeper mind into the Oneness with what the readings called the “Universal Consciousness,” a new perspective on Jesus Christ came through him to us, a perspective that is greater than one incarnation and beyond three-dimensional limitations.

From this perspective Christ is the Word, the Logos, the universal light of God manifested through an incarnate person. Cayce’s readings explain that the light of Christ first incarnated in Poseidia in Atlantis around 106,000 BC, doing so to help souls who had lost their conscious connection with God and had become trapped in matter. The attuned Cayce sees us as spirits and minds; physical bodies came long after our original creation in the image and likeness of the Universal Creator. The Christ spirit realized that it was going to take a series of incarnations in order to fully overcome the influences that had taken possession of our minds and hearts, and it came out of the heavens into matter to help us along the way.

The Christ spirit did not incarnate only in the Western world. Cayce explains that wherever the concept of one God and one brotherhood/ sisterhood was proclaimed, the Christ spirit was there. As the disciple John wrote in the opening lines of his gospel: “In the beginning was the Word [the Christ], and the Word was with God, and the Word was God. All things were created through this One; and nothing that has been made was made without this One. In this One was life, and the life was the light of humanity. The light shines in the darkness, and the darkness has not overcome it. The Word [the Christ] became flesh and dwelt among us, full of grace and truth.” A portion of the trinity of God came among humanity to help us. Cayce says this first happened in the legendary times of Atlantis; then again in Eden, between the Tigris and Euphrates; and again in Egypt, and again and again, continuing even today. In one of Cayce’s most often-published readings, he stated: “For the time never was when there was not a Christ...” (262-103)

Many devoted Christians wrestle with the edict that a person must “name the name” in order to achieve full resurrection, redemption, and eternal life. Even the Cayce readings quote this phrase, but with a significant twist to it: “He that would name the name must have become perfect in himself!” (254-3) How many of us Christians can say we have achieved this requirement? Another reading says: “Magnify that name—that name—that becomes on every tongue that of the crucified one in the manner that self is crucified to the fleshly desires…preferring the spirit of the Holy One before self, and considering the neighbor as yourself.” (137-118) Using this reading’s definition of the name, couldn’t a person who has heard little of Jesus be “naming the name” if he or she has crucified fleshly desires, preferring God’s will over his own, and loving his fellow man as himself? Is the name a word or is it spirit? Is salvation the name “Jesus” or is it loving God and others as Jesus instructed? Is Christ only Christian or universal? Is God and the manifestation of God among us limited to select souls? Does not God love and seek the companionship of all His/Her children?

“As an entity, a soul, a mind, enters [the spiritual dimensions] put about the self the cloak, the garment, yea the mantle of Christ; not as a man, not as an individual but the CHRIST—that universal consciousness of love that we see manifested in those who have forgotten self but—as Jesus—give themselves that others may know the truth.” (1376-1) Here we see Cayce equating Christ with “the universal consciousness of love.” This consciousness may be achieved by anyone of any religion or even no religion.

Consider the apparitions in Medjugorje, Bosnia, in 1981. A woman holding a baby was seen surrounded by exquisite rays of light. The young people (mostly teenagers) who saw her said that she looked like the sun, had 12 stars over her head, a luminescent white veil, and a pearl-gray dress. She introduced herself as “the mother of all people.” She encouraged one of the Christian children to follow the example of a good Moslem woman in her community. She said that her message was for all people, and “If it is necessary, I will appear in each home.” The luminescent lady warned her listeners that it is time for complete reconciliation among people. This message was given in Bosnia, where Christians, Moslems, Croats, and Serbs had much underlying hatred and prejudice toward one another.

Statue of Virgin Mary at Podbrdo,
site of the Medjugorje apparition. Source Wikipedia

We Christians need to allow Jesus Christ to be bigger than Christianity. As Jesus said (or the Christ spirit with whom Jesus made himself one), “Other sheep I have, which are not of this fold; them also I must bring, and they shall hear my voice; and they shall become one flock, one shepherd,” John 10:16. Jesus said that he taught and did what he was guided to do from God, the Father, within him. And before leaving us to become completely one with God, Jesus informed us that the “Comforter,” the “Spirit of Truth,” would come to us and guide us.

Of course, not only Christians have to let go of religious elitism. Jews, Moslems, and others have contingents that believe their faith is the only true faith, and all must swear allegiance to their doctrines. As difficult as it may be, Christians, Jews, Moslems, Buddhists, Hindus, and other religious groups are going to have to allow God to be the God of all people, and open their own hearts to all people. As the psalmist observed, God is everywhere and creator of everyone: “Whither shall I go from thy Spirit? Or whither shall I flee from thy presence? If I ascend up into heaven, thou art there. If I make my bed in hell, behold, thou art there. If I take the wings of the morning, and dwell in the uttermost parts of the sea; even there thy hand leads me, and thy right hand holds me,” Psalm 139:7-10. Cayce often quoted the passage: “Hear, O Israel, the Lord our God is one Lord,” Deut. 6:4; Mark 12:29.

Having presented this universal Christ, it’s important to acknowledge that in daily personal spirituality, one uses the practices, concepts, and ceremonies of one’s own religion and culture. In homes in Cairo, Tel Aviv, New Delhi, and New York, families flourish best when using their own religious customs. These evoke the spirit and love of God in particular ways that are ingrained into the nature of one’s being. These become sacred. Universalism is not a call to deny one’s unique ways. It is a call to cleanse our hearts and minds of prejudice against others in the name of God. This evil spirit of prejudice overtakes even the most well-intended, causing moral people to commit immoral acts, justified in the name of religious or ethnic purity. And this spirit does not just occur in war. It occurs in daily life, in little ways. All religious people have felt this from others. Jews, Moslems, and even Christians have felt the sting of prejudice against them. Many secularists in society today have an anti-any-religion attitude, and they base their prejudice on the negative actions of religious people throughout the ages. A new spirituality needs to be born. One that is universal. One that allows God to be God of all people. One that has faith that God can and will save all the souls that can be saved, no matter what their religious or nonreligious perspective.

John Van Auken has been studying the Edgar Cayce material for nearly 40 years. Popular with audiences around the world, he has written over 20 books and manuals, and a dozen videos. He has led 34 tours of Egypt and has meditated in the King’s Chamber of the Great Pyramid over 80 times. His latest books include 2038: The Great Pyramid Timeline Prophecy, Edgar Cayce and the Kabbalah, and From Karma to Grace and his latest videos are Edgar Cayce’s Tour of Egypt with John Van Auken and Meditation Techniques to Boost Soul Growth. John’s extensive knowledge of the Edgar Cayce readings, the Bible, ancient Egypt, and other world religions is combined with years of practical application of these truths in his own life. His exciting presentations are packed with useful information combined with insightful and revealing stories.