Any discourse on the subject of the alkaline-acid balance can be either relatively simple or endlessly complicated. This ranges from the simple advice of eating foods that are “20 percent acid-producing to 80 percent alkaline-producing” in order to keep an equilibrium in the body, as indicated in the Edgar Cayce readings, (540-11) to the opinion presently held by some physicians that alkaline-acid imbalance may be associated with degenerative disease. 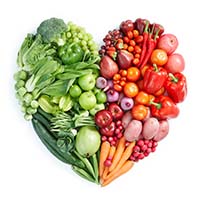 Primarily, the condition of our blood must always be slightly alkaline, and a pH of 7.4 is considered normal. (pH is the symbol used in expressing hydrogen ion concentration. pH 7 is the neutral point. Above 7 alkalinity increases; below 7 acidity increases.) Any significant variation from this can spell death, so it is necessary for the body to keep the blood at this level in spite of the combinations of food we eat, the condition of our nervous system, and habit patterns and local environment to which the body is exposed. However, there are various tissues and organs of the body that vary in pH, and it seems they go through continually alternating cycles from acid to alkaline in order for the body to maintain the proper pH of the blood. Consequently, some body tissues and fluids can be checked easily via secretions of saliva or urine in measuring alkaline-acid balances.

Dr. George Crile, in his book, A Bipolar Theory of Living Processes, explains that when cells from the liver and brain were stained, the nucleus stained acid, while the cytoplasm around the nucleus stained alkaline. In other words, a healthy cell is composed of a proper relationship between acid and alkaline; if it becomes too acid or too alkaline, it dies. In exhaustion and death, or lack of sleep, the differential stainability of the cells is decreased, or disappears. Thus, in a sense, death is associated with loss of the alkaline-acid balance within the individual cells of the organism.

All life is composed of this duality, which must have started with creation itself, and with the solar systems attracting and repelling each other on the basis of positive and negative electrical charges. As the Chinese might say, everything is “Yin or Yang,” positive or negative, masculine or feminine, day or night; and these are the creative forces that produce life itself. Dr. Crile says the brain, as the positive pole, sends out energy to various parts of the body, which are negative, but which step up energy to positive and thus send impulses back to the brain. There are various positive-negative relationships between organs; and most significantly from the Edgar Cayce readings we are told:

In the body we have two poles acting to the living body, the kidneys and the liver; the active principles are the same as two poles of electricity in the body, those which give life to the body. The liver is the stronger, excretive and secretive. The kidneys secreting, taking from the system the impurities. That is the use of these organs. (4909-1)

When there is an incoordination between these organs there is a disease potential. The human body is a bi-polar electro-chemical mechanism, in which the individual cells keep the flame of life burning. This continual energy conversion (oxidation) supplies the electricity which is the vital force of the organism.

A normal diet is about twenty percent acid to eighty percent alkaline-producing. (1523-3)

From the Edgar Cayce readings, and the consensus of many nutritionists, this is good advice. Dr. Bernard Jensen (nutritionist and owner of Hidden Valley Health Ranch, Escondido, Calif.) often suggests that four vegetables, two fruits, one protein, and one starch daily will provide this percentage.

The next question might be, What are acid foods, or alkaline foods? Unfortunately, foods do not react in the body as they do in a test tube, so, in reality, it is not always the foods eaten that determine the alkalinity or acidity, but what the body does with them. For example, when citrus fruits containing citric acid are oxidized in the body, they react as alkaline producers rather than acid. Even the tomato is non-acid forming (584-5). Yet dried prunes, plums, cranberries, and canned pineapple are acid-forming in the body according to Dr. George Wilson. He also notes that oatmeal, rice and whole wheat (alkaline foods) are oxidized by the body into acids. However, the acid of vinegar and hydrochloric acid are considered end products, and are not changed by the body.

Involved in this creation of acids and alkalines in the body, is the process of electrolytic combustion or oxidation, which, Dr. Wilson explains, takes place in the intercellular fluids. Its purpose is to burn up poisons, which may come from starches, sweets, fats and proteins that have been incompletely digested. Passing into the bloodstream, they become a part of the intercellular fluids. In such a state they clog intercellular spaces and cause stases, the forerunner of disease.

Information on checking the pH balance of the body was provided in the readings:

A general activity for a body in much of a normal condition is to keep the acidity and the alkalinity in a proper balance. The best manner to indicate this is to test the alkalinity or acidity of the body through the salivary gland membranes, or by taking litmus paper in the mouth. This also may be indicated through the urine. (540-11)

Suggestions to overcome over-acidity were provided in the readings as well: Whenever there is disturbance with this, if it is in the glands themselves (salivary...and you checked with litmus and found an acidity...pink color), then take citrocarbonate, that is, if it is indicated in the salivary glands that there is an acidity, then take a small quality of citrocarbonate. If the acidity is indicated through the kidneys, or from the urine itself, then drink a little of the carbonated waters, (sodium carbonate, being alkaline) as would be indicated with Coca-Cola—but that which is bottled is the better, [In general, the readings strongly recommend the cola syrup with plain water] or use a little of the Watermelon Seed Tea (alkaline).  (540-11)

For additional information, see the Cayce Health Database on the Basic Cayce Diet .

Genevieve Haller, DC, (deceased) is former Director of Chiropractic Research for A.R.E. She served on the Board of Trustees and participated in many conferences. This article was excerpted from the April-June 2013 issue of Venture Inward our member magazine and is in the Circulating File “Acidity-Alkalinity,” available to members at EdgarCayce.org/members.