Founder of A.R.E. Prison Outreach Program in 1972 Returns to Take Up the Reins Once More

Returns to Take Up the Reins Once More

Virginia Beach, Va. – Judith Stevens has never met a book she didn’t like, because as she puts it, “Books can be life changing.” Thomas Jefferson once said he couldn’t live without books. Edgar Cayce said the best book is self! Books based on Cayce’s readings offer an opportunity for us to learn more about ourselves and the purpose of our lives. Perhaps fewer populations could use such advice more so than those who find themselves in prison. 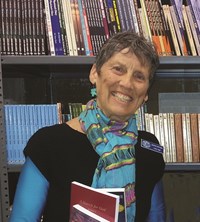 Thanks in large part to Stevens, this often forgotten segment of the U.S. population has received more than 100,000 books—for free—since 1972, when Stevens unknowingly began what would become the A.R.E. Prison Outreach Program. As assistant to the Press Manager at Edgar Cayce’s Association for Research and Enlightenment (A.R.E.), she began personally answering letters that came from prisoners. “In those days, no one knew what to do with the letters from prisoners, and they were put into a box, unanswered,” Stevens remembered, “which I retrieved and began answering, one by one.”

She soon learned the inmates were starved for books. Initially, the program spread and grew purely by word of mouth, and the letters increased. To keep up with demand, Stevens said she “began begging books from anyone who would give them to me.”

In the first full year of the program, an estimated 150 books were distributed. In 2016, the program sent out more than 7,000 books. “Most every book, magazine, newsletter, or other resource received by a single inmate is read by 10-20 other inmates in pre-established chains before being randomly passed, traded, or shared,” Stevens explained, “so the reach is vast!”

Stevens worked to raise money and support for the A.R.E. Prison Outreach Program for several years before leaving to pursue other interests in 1985. She worked with friends to help start a non-profit that helps protect the elderly in nursing homes and assisted living facilities. Stevens also moved into the world of business, becoming a real estate agent. More recently, she worked as an Assistant Wellness Director at a senior community, teaching yoga and meditation, creative writing, and taking senior residents to A.R.E.’s Health Center & Spa for massages.

When the position to oversee the A.R.E. Prison Outreach Program recently became available, several signs encouraged Stevens to return. “Nothing happens by chance,” Stevens asserted. As of February, she is back in charge of the A.R.E. Prison Outreach Program. “I know first-hand the power of this program,” she said, “This program is absolutely necessary; it is a lifeline to the inmates. Let’s just say, I’ve seen some miracles in my time.”

Some of those miracles are recounted first-hand in “Unlocking Hope,” a compilation of inmate testimonials to the transformative power of the Edgar Cayce material. A limited number of free copies of the book are available upon request by email to prison@edgarcayce.org or write A.R.E. Prison Outreach Program, 215  67th Street, Virginia Beach, VA  23451-2061.

Stevens said one of the biggest changes from her former days supporting the program to today has been that everything is computerized. While the A.R.E. uses a database, Stevens reminds “most prisoners have no internet access”. The program still must rely on “snail mail” to receive and respond to requests for books from inmates.

Stevens suggests the A.R.E. Prison Outreach Program is an ideal service project for an individual or group who can help in these and other ways:

To request a book for a prisoner you may know, visit online at EdgarCayce.org/prison. They—and Stevens—will be glad you did.

Edgar Cayce founded the non-profit Association for Research and Enlightenment (A.R.E.) in 1931, to explore spirituality, holistic health, intuition, dream interpretation, psychic development, reincarnation, and ancient mysteries—all subjects that frequently came up in the more than 14,000 documented psychic readings given by Cayce, who died in 1945. The mission of A.R.E. is simply to help people around the world change their lives for the better through the ideas and information found in the Cayce readings. The Virginia Beach headquarters is a popular site for locals and tourists with free daily lectures, a Health Center & Spa, the Cayce/Reilly® School of Massage, an extensive metaphysical library, a meditation garden, a stone labyrinth, and a bookstore and gift shop. The campus is also home to Atlantic University which offers two masters degrees (Transpersonal Psychology and Leadership Studies) through an online platform, as well as continuing education and certificate programs. Through A.R.E.’s many programs, services, publications, and membership outreach, individuals from all walks of life and religious backgrounds are provided with tools for personal transformation and healing at all levels—body, mind, and spirit. For more information, please visit EdgarCayce.org.

Download our Press Kit for print-worthy background on the Association for Research and Enlightenment, the A.R.E. Health Center & Spa, Atlantic University, Cayce/Reilly School of Massage, and more!