The History of A.R.E.’s Membership Congress 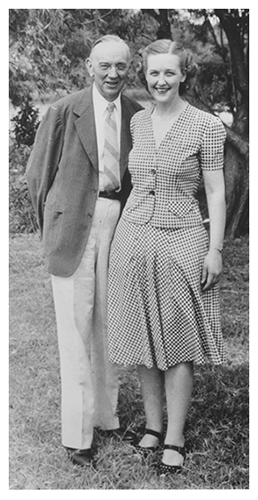 The A.R.E. Membership Congress has been an annual tradition for decades. Hundreds of individuals from around the country and often from all corners of the globe come together in Virginia Beach for a gathering of members each June. It is a time to join with other people in celebration over a work that has touched the lives of thousands. It is a time to hear about new happenings in the Cayce work and discover plans for the future. It is a time to recognize the transformative power of the Edgar Cayce readings – a source of information that has facilitated immense personal change and assisted countless individuals in every area of their lives: physically, mentally, emotionally, and spiritually. This is the A.R.E. Congress.

The idea for Congress was actually born one month before the official founding of A.R.E. It was first mentioned in June 1931 during the course of a reading dealing with the proposed new organization that was to grow out of the loss of the Edgar Cayce Hospital and Cayce’s original organization known as the Association of National Investigators (A.N.I.). The reading suggested that the new organization should begin an annual tradition in which members from around the country would be encouraged to get together. The reading recommended that the event take place somewhere between June 15 and July 1; and that the purpose would be for these members to hear speakers and collectively “renew the faith, confidence, purposes, aims, of the work itself.” (254-57) The annual event came to be called the A.R.E. Congress.

Following the readings advice, the first Congress was held the following year from June 27 to July 1, 1932. The agenda featured psychic readings by Edgar Cayce on the following subjects:

The total number in attendance was not well documented – one of Gladys Davis’ notes on file simply states: “Room crowded with Group members [Norfolk Study Group #1] and visitors.” (5749-2) From that event onward, the annual Membership Congress was born.

By 1935, the A.R.E. had 244 members and a mailing list of approximately 3,000 individuals. That year’s Congress was described as “the most successful Congress so far attempted,” and boasted attendees from New York, Washington and Virginia. In comparison, the 1979 Congress boasted attendees from 40 states, several Canadian provinces, as well as Australia, Ireland, and Mexico. 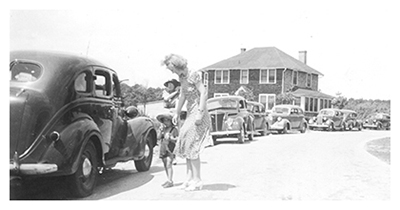 At the 1938 Congress a program to designate “Regional Representatives” of the organization throughout the country was announced by Hugh Lynn Cayce. It was essentially a volunteer program in which individuals who had readings and/or were familiar with Edgar Cayce would agree to serve as points of contact for the Cayce work in their areas. Their duties included: to explain and help procure readings for others, to distribute association literature, and to explain and promote the work of Edgar Cayce to others.

During the years that Edgar Cayce was alive, the early Congresses featured one or more Cayce readings on subjects of interest for those who were in attendance. For example, the following topics were explored at in Congress readings for the years listed: Scope and Purposes of A.R.E. (1933, 254-66); The Cayce Work for the Coming Year (1937, 254-95); How to Address the Problems Facing America (1939, 3976-24); and, World Peace (1942, 3976-27). In addition, the program often featured a discussion of various aspects of the Work (such as Study Groups or the Prayer Group or the booklet publication program) and often a lecture from Edgar Cayce himself. What follows is an excerpt from Cayce’s Congress address given in 1941:

About this time ten years ago there had come into my life one of the saddest things of my whole experience. I am not any different from other individuals who have their dreams and want to tell God how to do things. For years my great dream was to have a hospital, to have doctors and nurses and the best scientific means of treating individuals according to the Readings. My dream at last was realized. The Cayce Hospital was in existence. It was working. Then I was told that it was necessary to close the hospital.

I wondered what it was all about. No one can possibly imagine how it hurt, how it still hurts … So, in June ten years ago I sent out a letter to people through the country, those who – like you here – had experienced something of the power manifested through me. I said in that letter, “If it is worth anything, let’s carry on. If it isn’t, don’t bother - it won’t hurt me any more than I am already hurt.”

About sixty people came to a meeting at my home, in answer to that letter. Some who are here tonight were there also. We have carried on. Whether it has been worthwhile, you can answer better than I can. For I realize more and more that the power is not of myself. I could never tell what is wrong with somebody I have never seen, nor even someone I see every day. As the Master, our example has said, it is the spirit that worketh in and through me that doeth the work – His spirit.

Of course, today – after ten years – I am happy over what has come about. For each and every day, often many times a day, I receive messages of appreciation from people throughout the country – from the east, west, north and south – literally.

I only know that the credit does not belong to me. Let me ask of you one thing – that you take home with you some of the things you have heard here tonight. Be a little more tolerant, more patient. When someone says something unkind to you, laugh at him and feel sorry for him – instead of fighting back. It isn’t easy, but it is your cross, the price you are paying for the wonderful privilege of being a true Christian. I expect to see all of you at my Sunday School class tomorrow morning at nine forty-five.  (254-108 Report File)

Another focus of the early years included reports on the results of specific readings’ case histories. For example, here is an overview of one such report given in 1939 at the 8th Annual Congress:

Dr. Curtis Hudgins of Norfolk, Virginia reported on his observation and treatment of twenty-three cases on whom readings had been given. Dr. Frank Dobbins, who came from New York to be present for this meeting, reported his observations and experiences with cases selected from over two hundred individuals who had obtained physical readings.

Both of these doctors emphasized the accuracy, range and benefits derived. Some two hundred members and friends were present at this meeting. (1844-2 Report File) 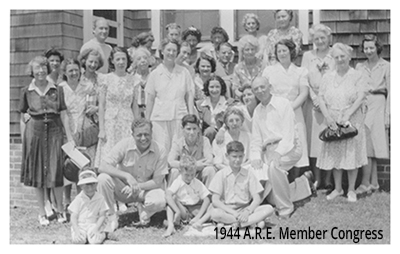 During the 1930s and 1940s Congress was organized by the small Cayce staff. A.R.E. Manager Hugh Lynn Cayce often had a major role as speaker and organizer. The readings themselves often provided guidance as to the topic of the program and gave Edgar Cayce information that he could use in his own lectures. Other A.R.E. personalities like physician Harold J. Reilly and writer Thomas Sugrue were featured on various programs. During that period the length of Congress varied from two to four days and on occasion a week-long program; the length of the program depended upon the number of presentations being offered.

Hugh Lynn Cayce was eventually drafted into service during World War II. While stationed in England in 1944, he wrote a letter that was read to attendees of the 13th Annual Congress containing his hopes of what A.R.E. might one day offer its members. It became an incredibly accurate vision of the future:

May I add my welcome and greetings to you who are attending the meetings of the Thirteenth Annual Congress of the Association for Research and Enlightenment … Look ahead and visualize some of the services which can be rendered Active members: I will only list them now, perhaps you will help us plan and fulfill them. 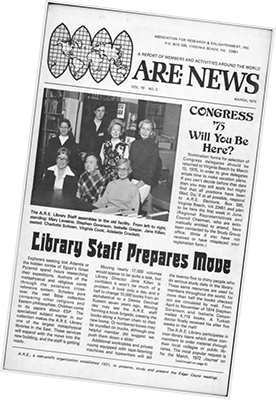 After the death of Edgar Cayce in 1945, the volunteer program of Regional Representatives continued as a point of contact for the Cayce work. However, rather than helping people understand or obtain readings, the focus instead turned to creating study groups and the management of lecture programs featuring A.R.E. speakers in their areas whenever the occasion arose.

Throughout the ‘50s and ‘60s, Congress was a time for in- depth classes focusing on topics from the readings. The Congress was expanded during the 1960s to offer two weeks of classes. Individuals were invited to attend either or both program weeks.

As both the Study Group program and membership grew, it was decided that Congress would become a “delegate” program in which individuals would be elected from their areas to attend Congress and represent others from the same locale. For example, the cover page of the March 1975 A.R.E. News reminded all members that it was time to submit their delegate vote:

Nomination forms for selection of Congress delegates should be returned to Virginia Beach by March 15, 1975, in order to give delegates ample time to make vacation plans. If you can’t decide before that date then you may still apply but might find that all positions have been filled. Do, if at all possible, respond to A.R.E. … Regional Representatives and Council Chairmen, who are automatically entitled to attend, have been contacted by the Study Group office. 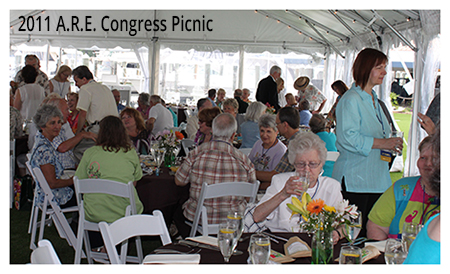 During this period, the focus of Congress shifted to include training tracks for various A.R.E. volunteers: speakers’ teams, volunteer outreach, study groups, publicizing programs and so forth. This model only lasted between 1972 and 1979 before Congress returned to its earlier model of inviting all members.

Although the early Congress were run entirely by A.R.E. Headquarters, during the height of Study Group Councils the entire week was run and organized by volunteer representatives throughout the country. In the 1980s the planning shifted again to include input from A.R.E.’s Headquarters Conferences department and volunteer representatives working together on the planning team. Because of the enormous number of logistics – speakers, socials, advertising, sharing groups, community meals (such as the picnic), a talent show, etc. – eventually the planning shifted again so that today the entirety of Congress week is planned by A.R.E. Headquarters. Today, Congress remains one of the most popular events hosted by the organization. 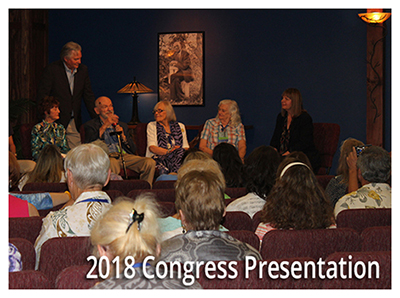 The A.R.E. Membership Congress has been a mainstay of the A.R.E. since its beginnings. Each year hundreds of members from all parts of the country (and often from various locales throughout the globe) make the trek to Virginia Beach. For many it has become an annual event. It is a time to meet new friends and celebrate with old ones. It is a time to become re-inspired and recharged about this great Work – gaining inspirational insights from each other, the speakers, the staff and volunteers, the A.R.E. Community as a whole, and the readings. It is a time to hear and share ideas about plans for the future of this exciting work. And finally, it is a time to learn from each other as to how we can most effectively present this Work to others. As Hugh Lynn Cayce said at Congress 50th Anniversary in 1981 (the last Congress he would attend before his death), “How can you not share the best that you know?

Kevin J. Todeschi, MA, is Executive Director and CEO of Edgar Cayce’s Association for Research & Enlightenment, A.R.E. and Atlantic University. As both student and teacher of the Cayce material for more than forty years, he has lectured on countless subjects in front of thousands of individuals upon six different continents. He is a prolific writer and the author of more than 25 books, including the best-selling Edgar Cayce on the Akashic Records, Edgar Cayce on Soul Mates, Edgar Cayce's Twelve Lessons in Personal Spirituality and The Best Dream Book Ever. He also authored A.R.E.’s “Dream Dictionary App” and the “Edgar Cayce Co-Creation App,” both available at: www.edgarcayce.org/apps.