Edgar Cayce (pronounced Kay-Cee, 1877-1945) has been called the "sleeping prophet," the "father of holistic medicine," and the most documented psychic of the 20th century. For more than 40 years of his adult life, Cayce gave psychic "readings" to thousands of seekers while in an unconscious state, diagnosing illnesses and revealing lives lived in the past and prophecies yet to come. But who, exactly, was Edgar Cayce?

Cayce was born on a farm in Hopkinsville, Kentucky, in 1877, and his psychic abilities began to appear as early as his childhood. He was able to see and talk to his late grandfather's spirit, and often played with "imaginary friends" whom he said were spirits on the other side. He also displayed an uncanny ability to memorize the pages of a book simply by sleeping on it. These gifts labeled the young Cayce as strange, but all Cayce really wanted was to help others, especially children.

Later in life, Cayce would find that he had the ability to put himself into a sleep-like state by lying down on a couch, closing his eyes, and folding his hands over his stomach. In this state of relaxation and meditation, he was able to place his mind in contact with all time and space — the universal consciousness, also known as the super-conscious mind. From there, he could respond to questions as broad as, "What are the secrets of the universe?" and "What is my purpose in life?" to as specific as, "What can I do to help my arthritis?" and "How were the pyramids of Egypt built? His responses to these questions came to be called "readings," and their insights offer practical help and advice to individuals even today.

Many people are surprised to learn that Edgar Cayce was a devoted churchgoer and Sunday school teacher. At a young age, Cayce vowed to read the Bible for every year of his life, and at the time of his death in 1945, he had accomplished this task. Perhaps the readings said it best, when asked how to become psychic, Cayce’s advice was to become more spiritual.

Although Cayce died more than 60 years ago, the timeliness of the material in the readings — with subjects like discovering your mission in life, developing your intuition, exploring ancient mysteries, and taking responsibility for your health — is evidenced by the hundreds of books that have been written on the various aspects of this work as well as the dozen or so titles focusing on Cayce's life itself. Together, these books contain information so valuable that even Edgar Cayce himself might have hesitated to predict their impact on the contemporary world. In 1945, the year of his passing, who could have known that terms such as "meditation," "spiritual growth," "auras," "soul mates," and "holistic health" would become household words?

The majority of Edgar Cayce's readings deal with holistic health and the treatment of illness. As it was at the time Cayce was giving readings, still today, individuals from all walks of life and belief receive physical relief from illnesses or ailments through information given in the readings — some readings were given as far back as 100 years ago! Yet, although best known for this material, the sleeping Cayce did not seem to be limited to concerns about the physical body. In fact, in their entirety, the readings discuss an astonishing 10,000 different topics. This vast array of subject matter can be narrowed down into a smaller group of topics that, when compiled together, deal with the following five categories: (1) Health-Related Information; (2) Philosophy and Reincarnation; (3) Dreams and Dream Interpretation; (4) ESP and Psychic Phenomena; and (5) Spiritual Growth, Meditation, and Prayer.

Further details of Cayce's life and work are explored in the classic book, There Is a River (1942), by Thomas Sugrue, available in hardback, paperback, or audio book versions.

Members of Edgar Cayce's Association for Research and Enlightenment (A.R.E.), the nonprofit founded by Cayce in 1931, have access to the entire set of 14,306 readings in a database residing online in our members-only section. The readings can also be found in their entirety in our physical library, located in the Visitor's Center, second floor, at our headquarters campus in Virginia Beach, which is open to the public daily.

In This Section
There Is A River 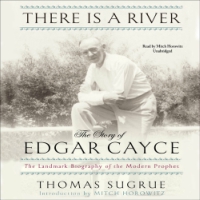 An engaging read providing hope to anyone in need, Thomas Sugrue's complete and definitive biography is the only one written from the perspective of someone who lived with and interviewed Edgar Cayce and his family. Read by best-selling author Mitch Horowitz. 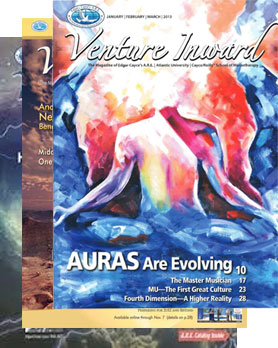 Learn More about the Amazing Work of Edgar Cayce

Try a free issue of Venture Inward magazine plus free online audio and video files and a downloadable app. 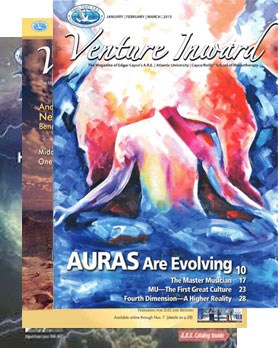 Learn More about the Amazing Work of Edgar Cayce

Try a free issue of our member magazine, Venture Inward, plus receive free online audio and video files and a downloadable app!